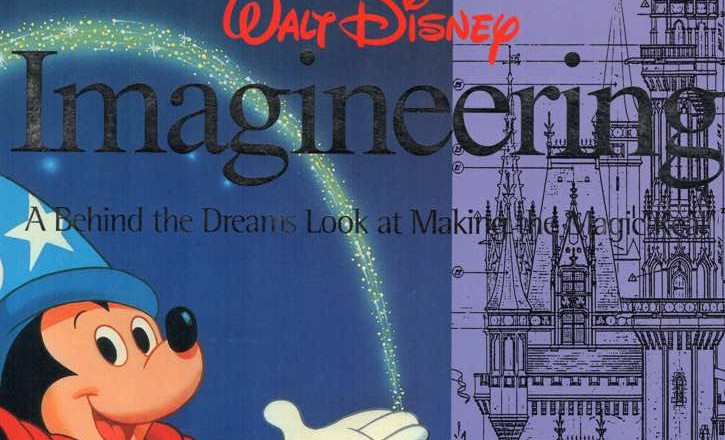 Walt Disney Imagineering: A Behind the Dreams Look at Making the Magic Real, a book review

Walt Disney Imagineering: A Behind the Dreams Look at Making the Magic Real was released in 1996 and was, truly, one of the first books to take us inside the hallowed halls of Imagineering. It’s not a tell-all, behind-the-scenes book; it is more like a this is what Imagineers do and have done book. Clocking in at 192 pages, it is another must have for every Disney park fan. 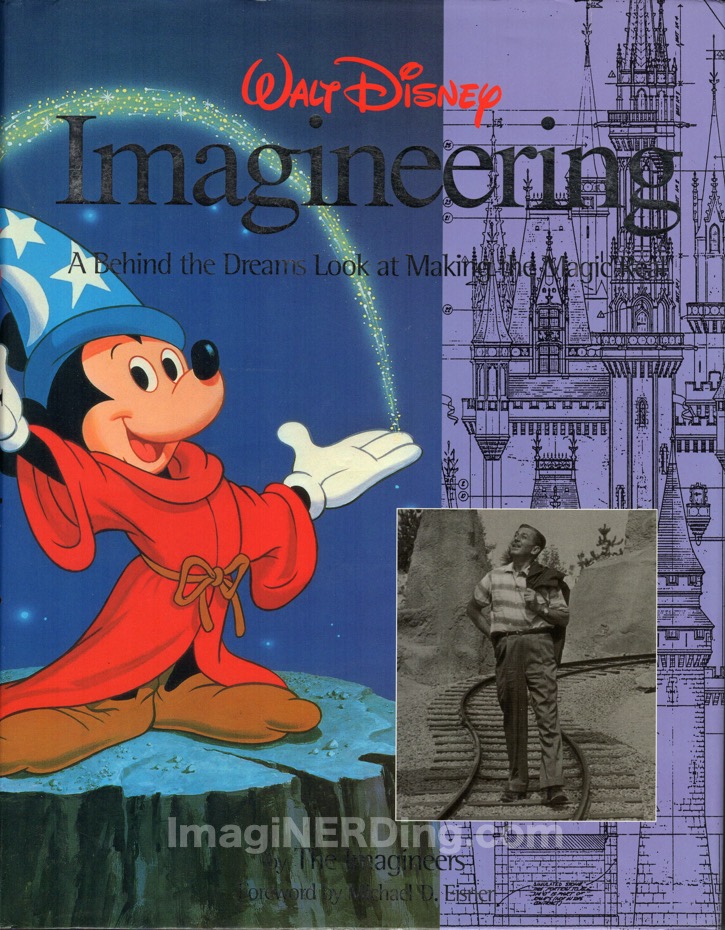 So, how would you approach the idea of writing a book about Walt Disney Imagineering? The Book Team (Bruce Gordon, David Mumford, Kevin Rafferty and Randy Webster) sums it up as follows:

Rather than a chronological history, the book would try and capture the spirit of Imagineering—what it’s like to be here, to walk sown our hallways, and most importantly, to be an Imagineer. The story could be told through quotes and anecdotes, as if the reader was really here, looking over our shoulders while we work.

The book comes pretty close to that.

The 192 pages are divided into five major chapters that purport to cover every aspect of Walt Disney Imagineering (although, there was not a section on politics or backstabbing). As expected, the Imagineers make fantastic use of the Walt Disney Imagineering and Company archives to share concept artwork, paintings, drawings, sketches and some jaw-dropping art, in general. Not to slight the text in any fashion, but people will be drawn more to the lavish images. The narrative (really, it isn’t too technical) runs along the same lines as other titles by Bruce Gordon and David Mumford; you will not be disappointed and will learn a lot about the process of Walt Disney Imagineering. 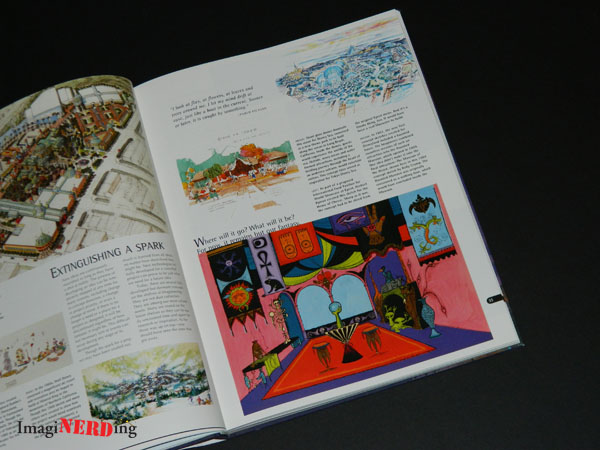 The first chapter looks at creativity and defines what the Imagineers consider brain storming. No idea is ever thrown away and they live in a corporate culture where there are no bad ideas. This section has some fantastic conceptual artwork, sketches, story ideas, paintings and more. Did you ever hear of the Herb Ryman designed House of Cheese? You do get to see a lot of concept work for current (and long gone attractions) as well as as some attractions and parks that never made it past the drawing board. 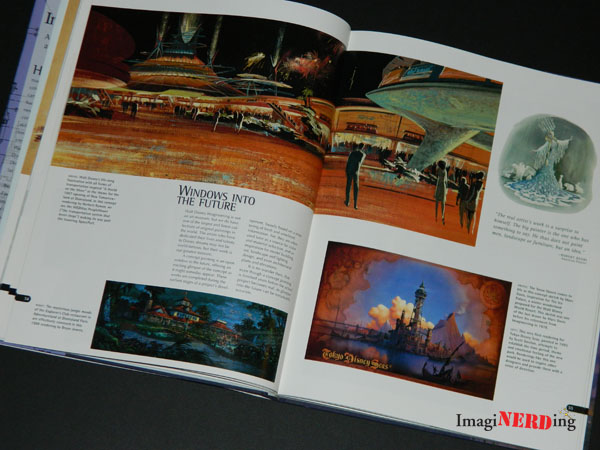 The second chapter is the largest and the meatiest. We take the next step towards the reality of the ride and progress with more concrete ideas, artwork and concepts. It comes down to trying to define how the story will be told in a 3D world. There are a lot more paintings presented that showcase an idea that is almost more emotion and feeling. The Imagineers really seem to revel in this area, due in large part to the copious amounts of artwork that is shared. Beyond the artwork, attention is paid to the entire creative process at this point. Anecdotes, storyboards and scale models help to walk you through the development of the final product.

We start to see increasingly solid plans in the third chapter. Whereas the previous section looked at the larger picture, here we see more of the individual details as they start to emerge. Instead of seeing a large painting of a building, we are presented with the architectural sight plans. We also see a lot of artwork on ride vehicles and color schemes. At this point, the Imagineers are working off of pretty solid ideas and most of the artwork presented is easily recognizable in a current form.

Towards the end of the chapter, we get to see some of the cutting edge technology that the Imagineers were developing and using. At the time it was pretty spectacular and fifteen years later it feels more like a historical piece. Still, there are a lot of jobs and positions within Imagineering that are are discussed (including the librarians in the Information Research Center). 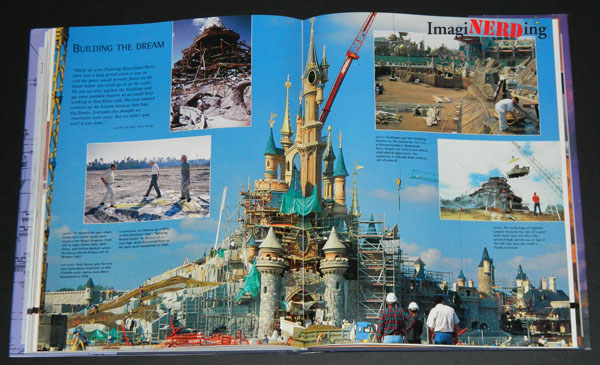 The fourth chapter is all about constructing and installing the show sets, vehicles, buildings…and everything else! The Imagineers delve into their archives to pull construction photos from every era in the Disney Parks, from Disneyland, Walt Disney World, Tokyo Disneyland and Disneyland Paris. It is a fun chapter that doesn’t get too technical but still gives you a good idea of how encompassing the work is when you’re a Imagineer and in the field.

The fifth and final chapter is short but very sweet. Basically, the Imagineers dedicate two pages to every Disney theme park (that existed prior to 1996). There are a few historic photos for each park, but the majority are more current photographs. You know, since the book is over fifteen years old, all of the photos are historical! Also, it is an interesting look at what the Imagineers think defines the magic of the theme parks.

This is an important work about the Imagineers, Disney theme parks and, to some extent, the history of the Disney Company. It is one of the few works to step inside the environs of Flowers Street and share how the Imagineers do their jobs. If you can find a copy for under $40.00, go for it; you will not be disappointed.

Another reason to like Walt Disney Imagineering is that the Imagineers hid a copy of it in the single rider queue in Expedition Everest at Disney’s Animal Kingdom. You might miss it, but it has been there since 2007 (if not since the opening). Not the first hidden book, but it is a great one! 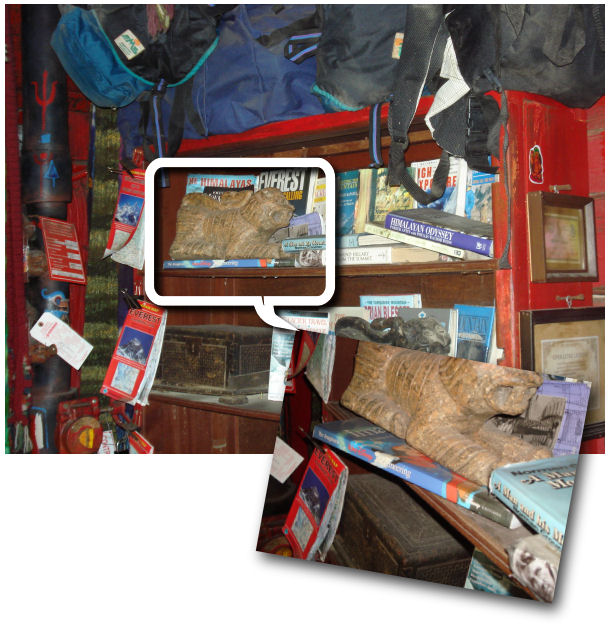 Are you a Walt Disney Imagineering fan? Have you read this book?

2 thoughts on “Walt Disney Imagineering: A Behind the Dreams Look at Making the Magic Real”