The Monster at Kings Island

The Monster at Kings Island is a treasured childhood memory. I wrote about The Flying Dutchman flat ride that now resides at Kentucky Kingdom; it was bittersweet to watch the Flying Dutchman and think about the times I rode it with my younger brother.

When I finally visited Kings Island after more than 30 years, I wasn’t prepared for the rush of emotions that hit me when I finally made my way back to the Coney Mall section.

Seeing the entrance to The Racer. The brick planters of the mall. The carnival-style game booths that seemed so strange as a child. But the two things that hit me the hardest were the small seating area with tables and The Monster.

See, The Monster was another ride that my brother and I rode over and over. W e looked forward to it every trip. We were allowed to stand in the queue by ourselves and it gave us a feeling of being on our own.

Other Memories of Kings Island

But before we get to The Monster, let’s talk about some of the other memories. 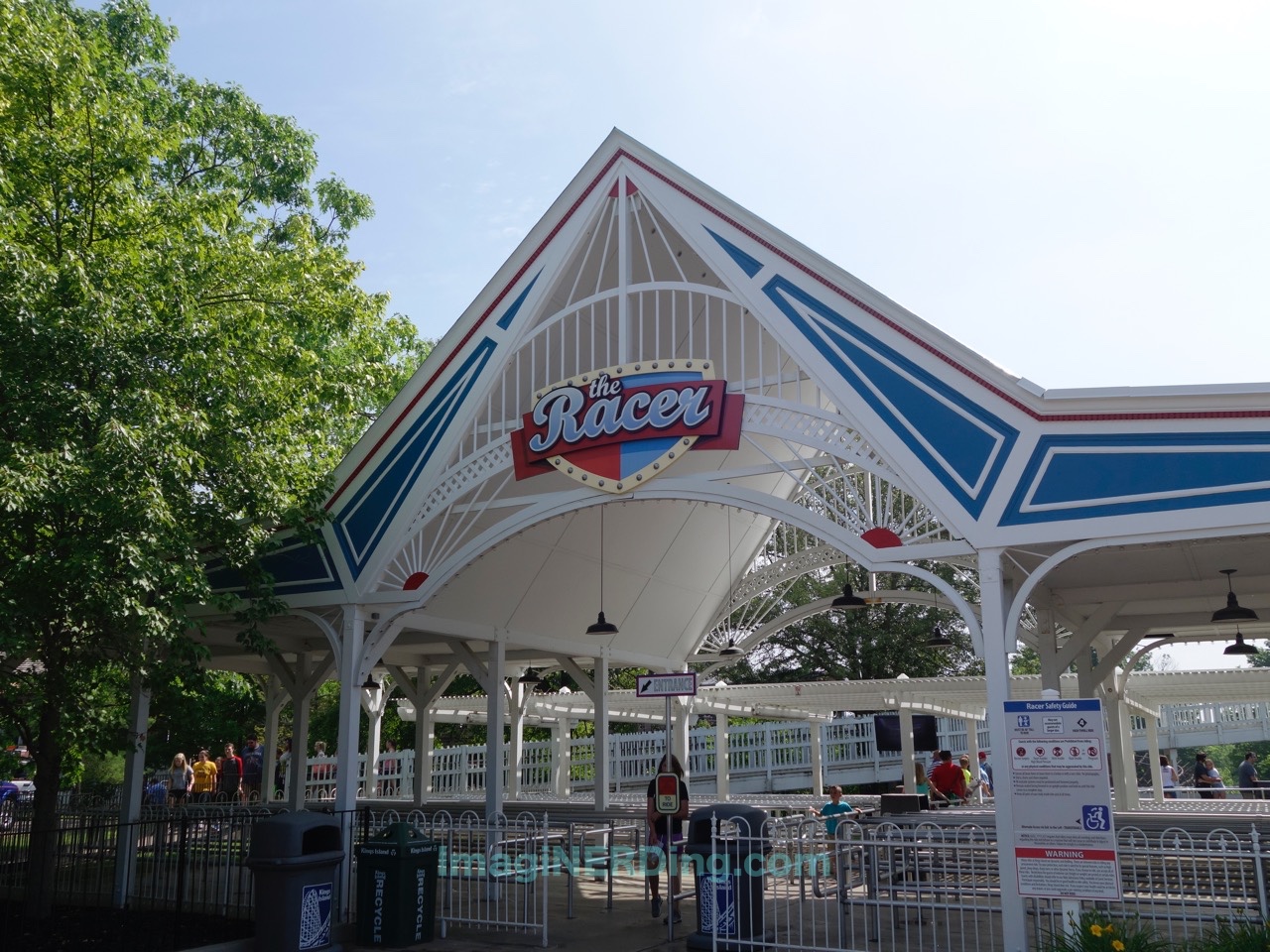 My mom loved The Racer. Actually, she never met a roller coaster she didn’t like. When we would visit Kings Island, my mom would go off to ride The Racer and we would sit with my dad (he wasn’t into many theme park rides). 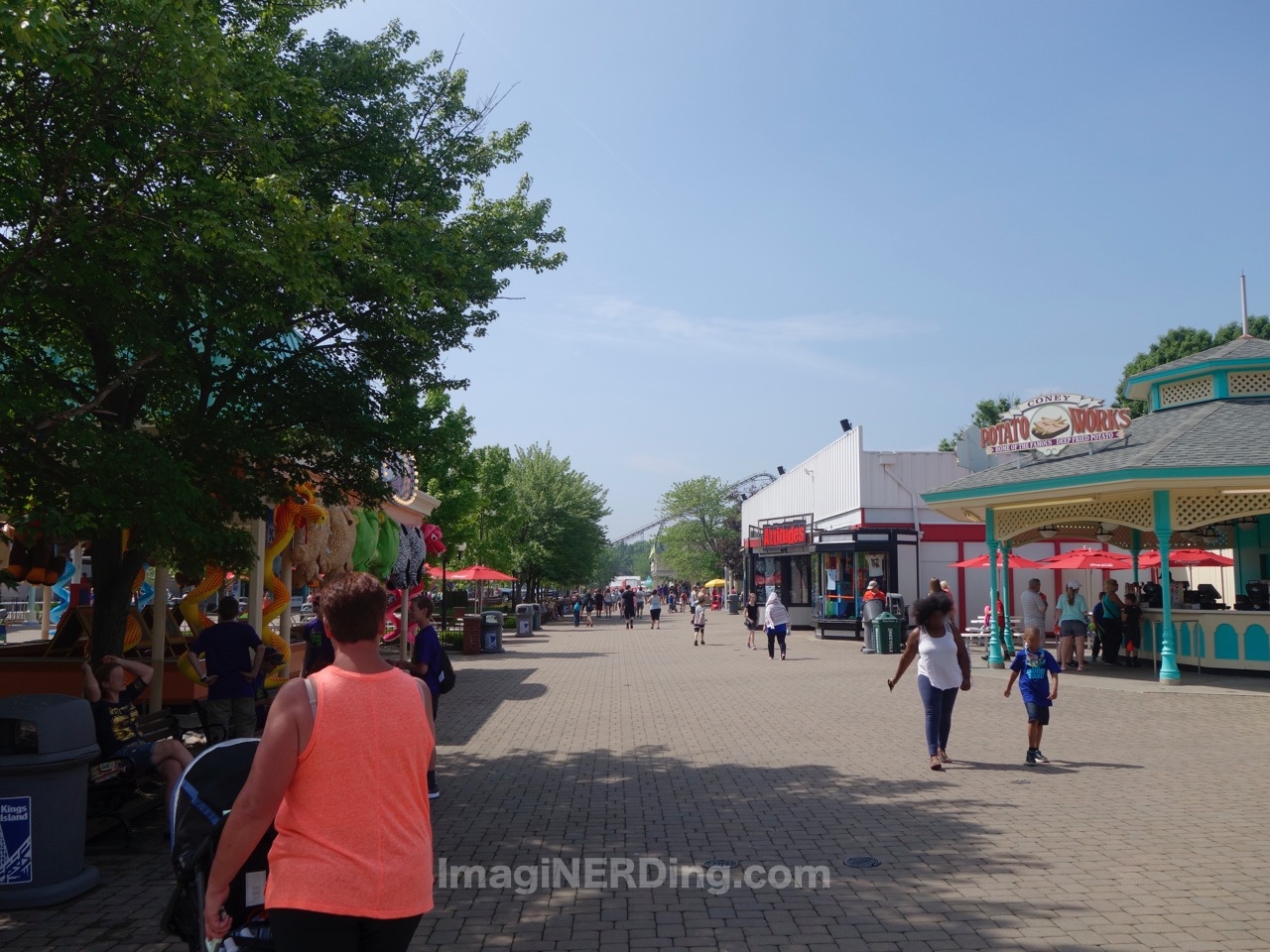 I remember spending so much time in the Coney Island section of Kings Island. I think my parents really loved that it was reminiscent of the original Coney Island. 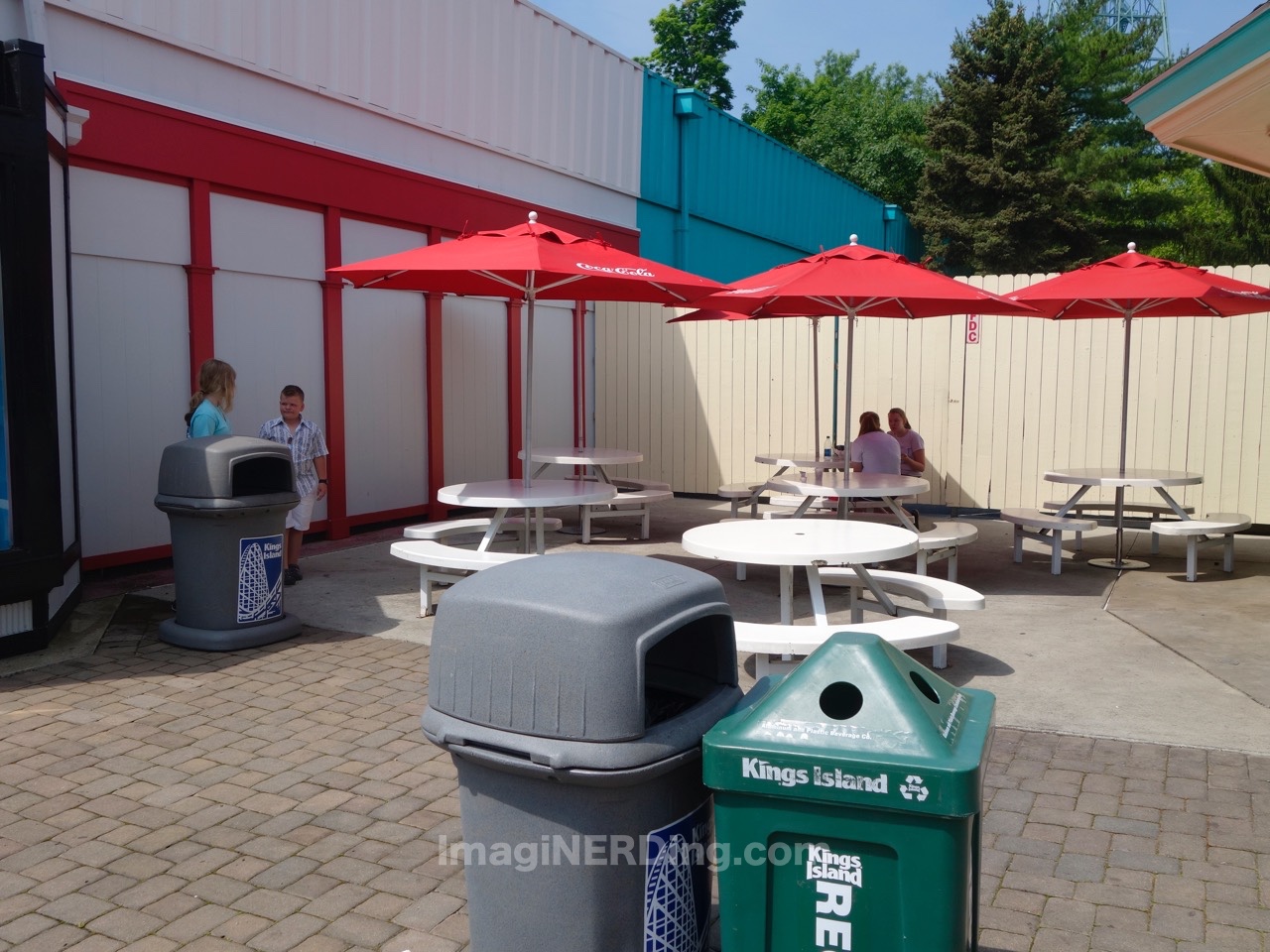 When I turned the corner into the Coney Island section, the seating area (pictured above) made me stop and take a moment. This is one of the places where we’d wait for my mom to meet us after riding The Racer. It seems like it was hours on end, and based on the popularity of The Racer, it might have been! It was also one of the places we’d meet my parents while my brother and I rode The Scrambler and The Monster. 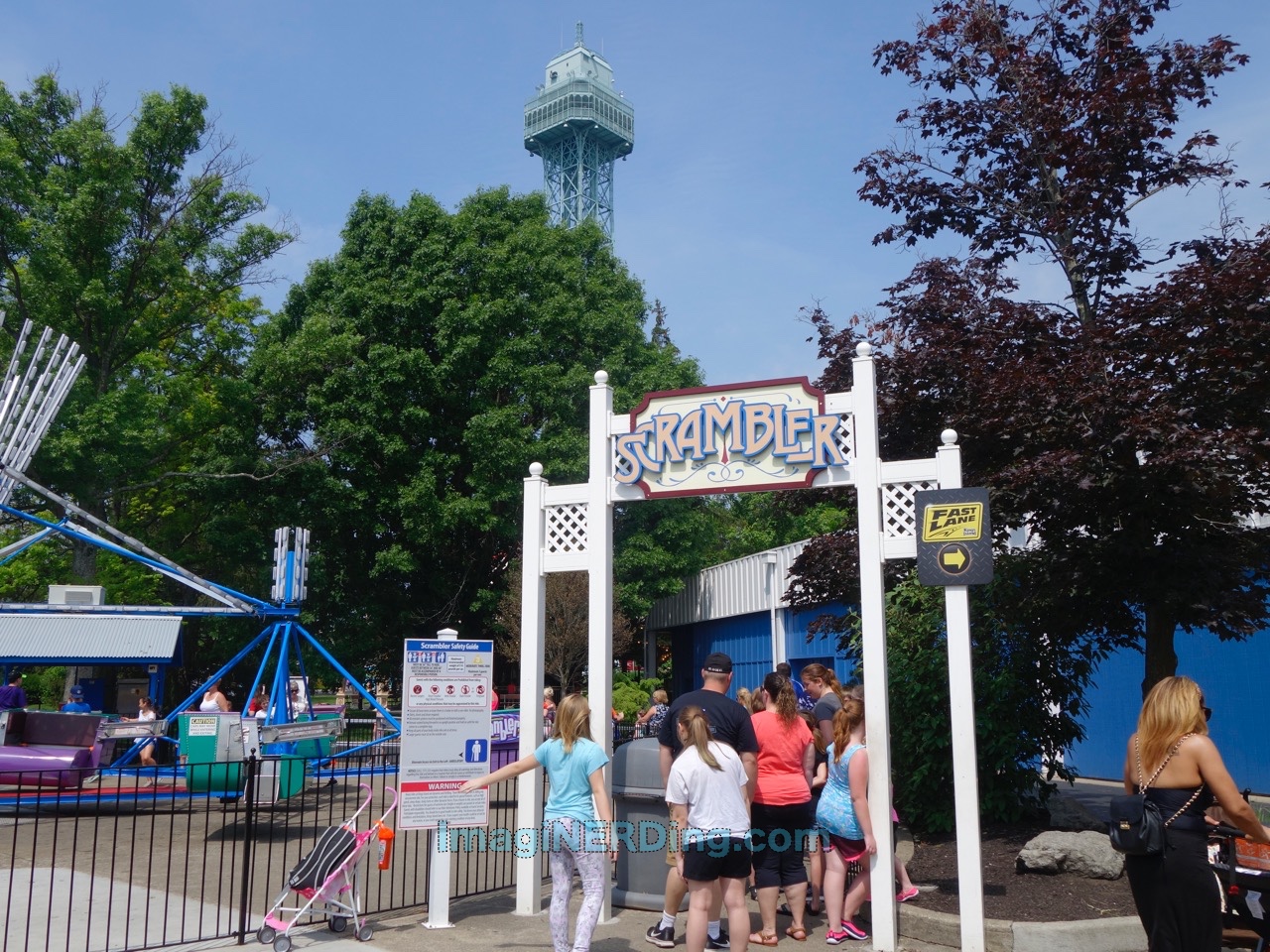 The Flying Dutchman, Der Spinning Keggers, The Scrambler and The Monster were the go-to rides during my childhood days at Kings Island

The Monster at Kings Island 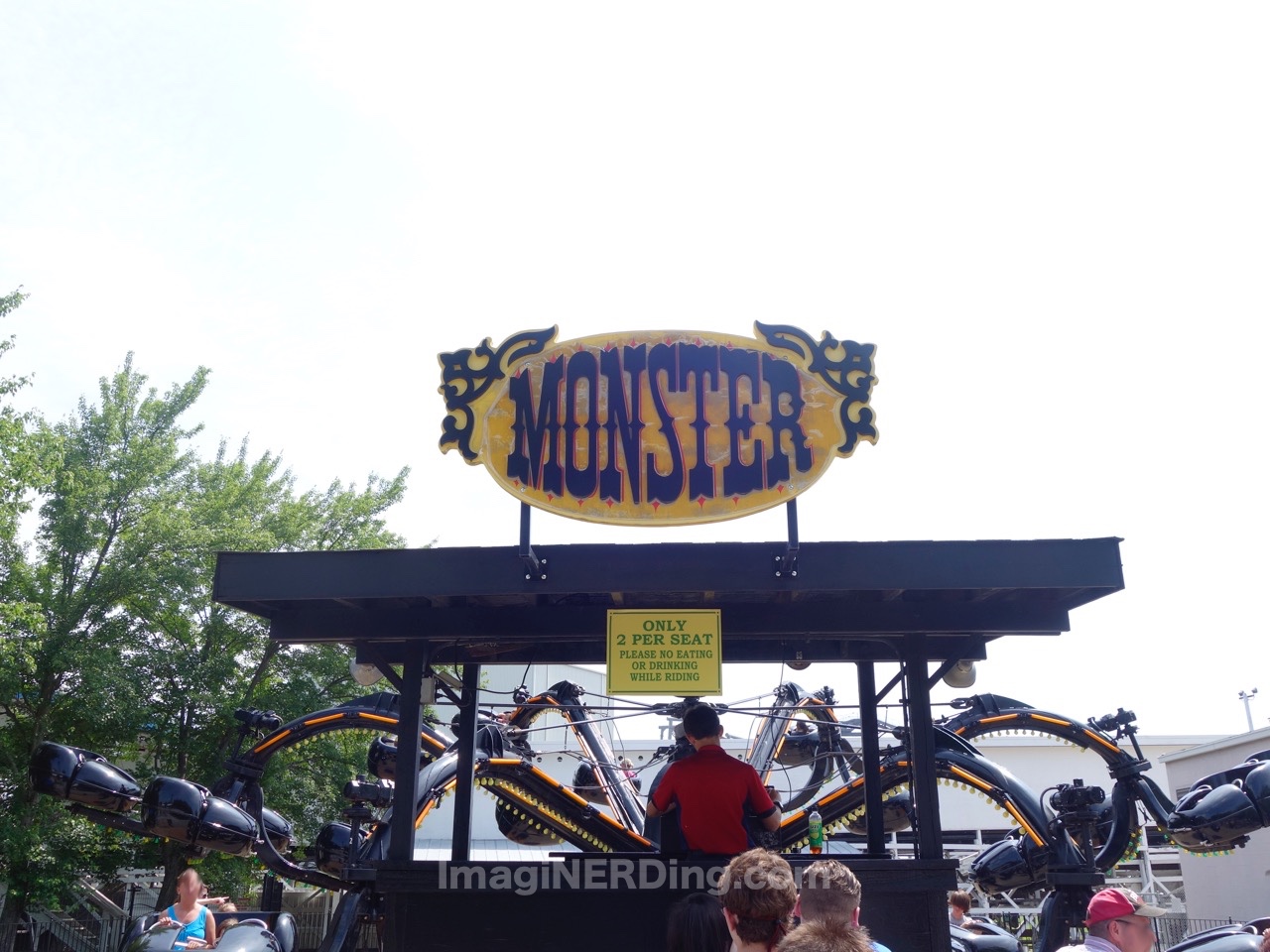 I do remember standing in the queue and waiting during the entire load process. Wondering if we were going to be lucky enough to make this ride or have to wait on the next. Everything about the ride felt the same, even after 30 years.

The Monster is an octopus ride that’s known as an Eyerly Monster. The Monster at Kings Island has six arms, with four cars on each arm. This makes it is a monster and not an octopus or a spider.

The cars spin independently, largely based on weight and position, while the arms move up and down. The entire ride spins in a slow circle. It takes a long time to load and unload since each car has to be touched by an employee. Basically, two arms at a time can be loaded, while the other four wait in the air. It’s a fun way to start the ride, because you feel like you get a few extra minutes while the other cars are loading. 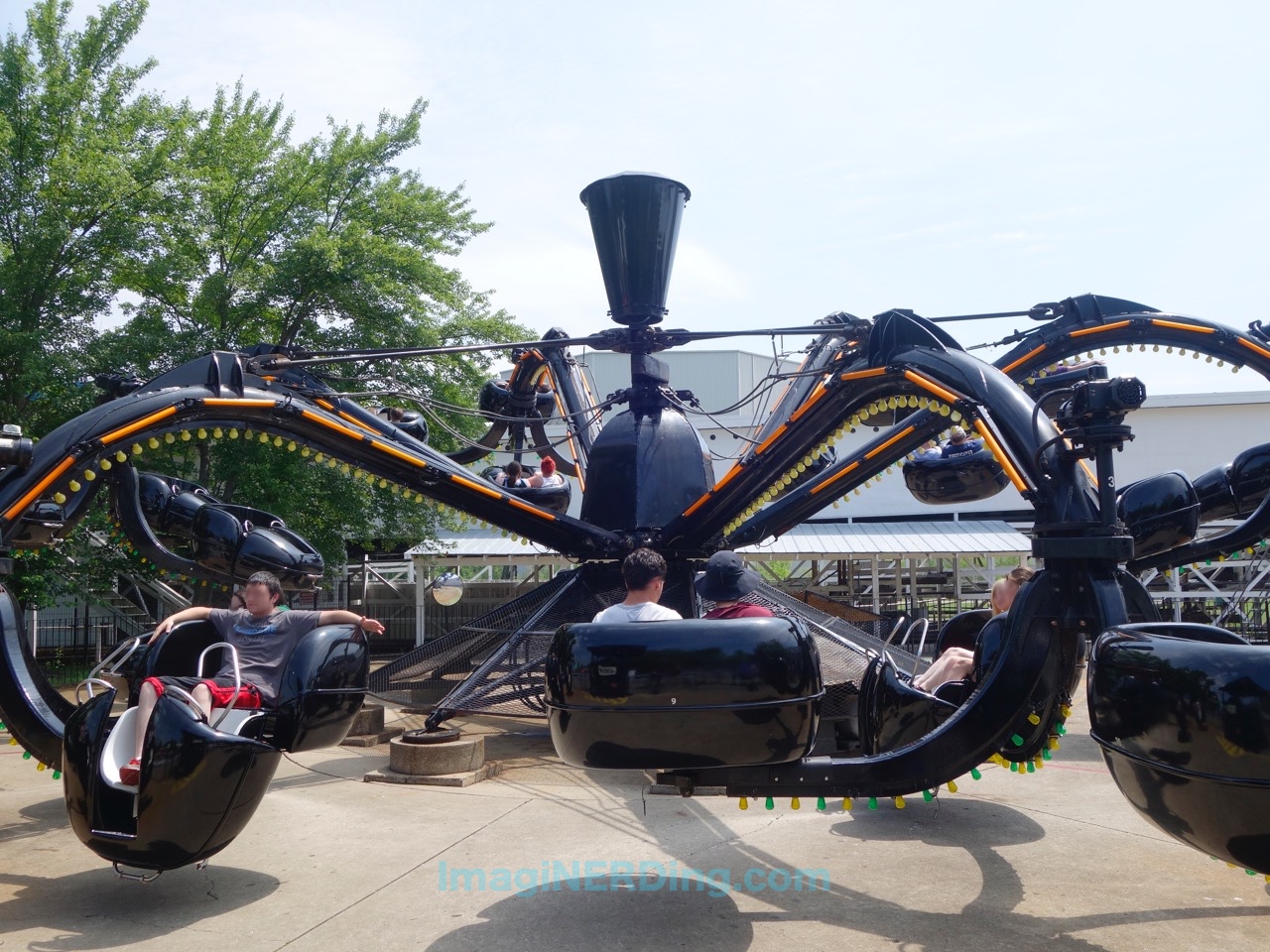 I don’t remember the ride vehicles being so much smaller 30 years ago! Each vehicle is clam-style, and you climb into it. The employee then lifts it and secures it.

There are brief moments of weightlessness and a lot of spinning. I definitely liked it much more as a child.

Eyerly Aircraft Company manufactured this Monster and several others at other Cedar Fair parks and across the country. The Monster at Kings Island was originally installed at Coney Island from 1969 to 1971 before being moved for the 1972 opening of the amusement park. Eyerly Aircraft began in 1930 in Salem, Oregon. Eyerly created a ground-based flight simulator and a salesman convinced him to sell to amusement parks and fairs. The first one produced was the Loop-O-Plane. Many amusement park fans will recognize it from the salt and pepper shaker moniker it would hold.

It was quite amazing to see that The Monster at Kings Island was still up and running. I would assume that the small footprint and the fact that it’s bounded by The Racer and arcades makes it a safe fit. The Monster is one of the handful of opening-day attractions left at Kings Island.

The Monster at Kings Island Video

Visiting Kings Island was pretty amazing. So much has changed over 30 years, yet so much of the charm of the park is still there. Many friends have talked about how Kings Island is one of the prettier Cedar Fair parks, and they’re right.

Have you ridden The Monster at Kings Island? Do you have a favorite ride from childhood?

One thought on “Monster at Kings Island”