One Last Taste from Carowinds’ Taste of the Carolinas 2016 Food and Wine Festival!

We had a few tokens left over from a previous visit to the Taste of the Carolinas Food and Wine Festival at Carowinds. Not that they were burning a hole in my pocket, but almost $40 worth of tastes is more than worth the trip! Also, it was the very last weekend of the festival and there were a few things we still hadn’t sampled.

The first booth we hit during the final weekend was the Asheville/Mountains Region. We ended up getting three tastes of the Mushroom Ravioli with Wild Herb Butter (4 tickets) during the day. It was a clear favorite!

I headed over to the BBQ South Carolina Region to get one of the Sweet Potato Popovers (4 tokens).

The Sweet Potato Popover is served warm with a sweet drizzle.  The crust of the popover was warm but stayed together to hold the sweet potato filling. It was such a warm taste and I couldn’t decide if it would be a better breakfast or dessert! The sweet potato was quite filling and it was a great size. As far as dessert-style offerings, it was a close second to the Pecan Cinnamon Bread pudding. 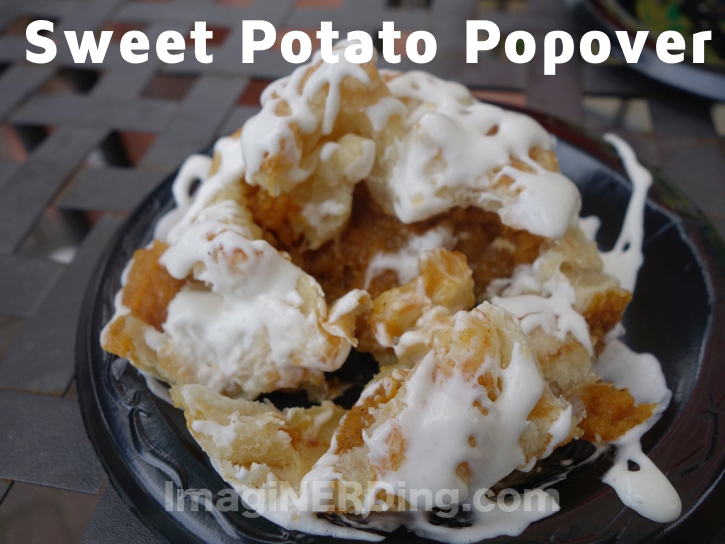 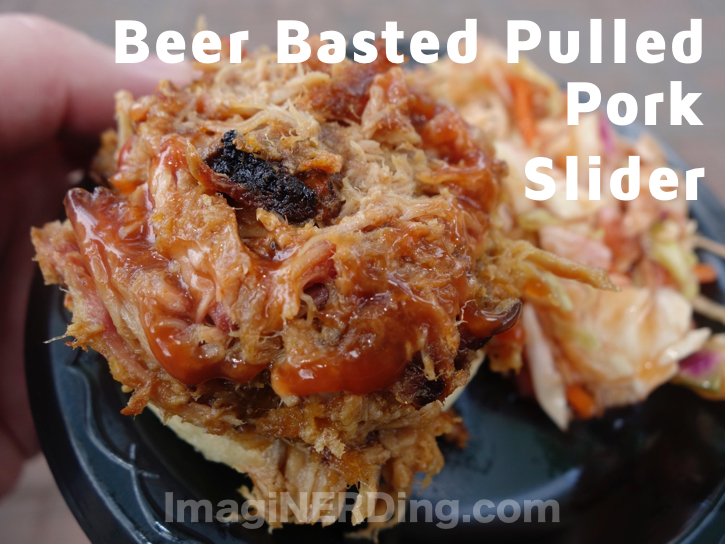 I chose to get the Beer Basted Pulled Pork Slider from the Lexington booth. On my first visit, I found that the red slaw really overpowered the sandwich. The slaw is served very cold and it quickly made the pork cold. This time I asked for it on the side and treated the cole slaw like a side dish. The barbecue was good on it’s own. I enjoyed it with and without the sauce. The slider buns were different from the first weekend; they were much softer and held the sauce well. The cole slaw was good on its own. I was surprised at how the sauce really clung to slaw. This tied with the Neese Sausage, Fig and Goat Cheese Popover as my favorites. 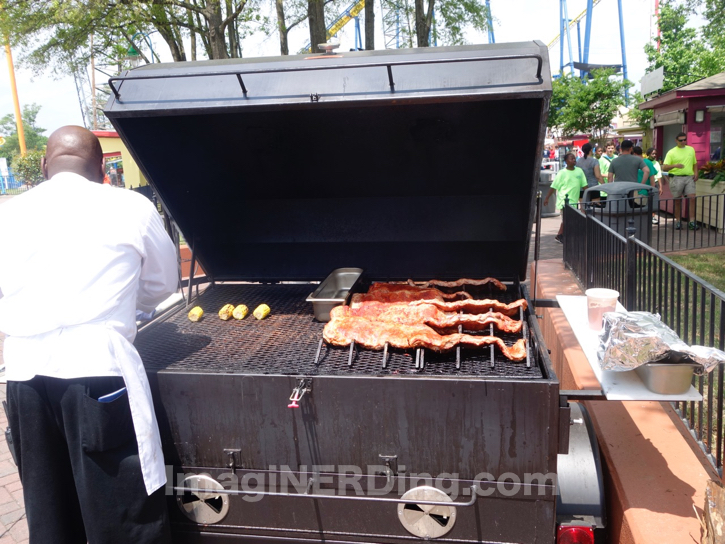 The smoker located next to the Lexington booth provided a lot of the grilled and barbecued foods. The smells coming off the grill were nothing short of mouth-watering. I wondered if the five-second rule worked with the smoker.

The Windy Hill Apple Cobbler (three tokens) at the Upstate South Carolina booth was wonderful. It would be the perfect dessert on a crisp Fall day and I wish that I’d picked it up on that first windy weekend. The apples were firm but yielding and the molasses-based sauce added the warm spiciness that drew you in. It was a great dessert.

Overall, we tried a few new tastes (mentioned above) and we re-visited our favorites, like the Mushroom Ravioli. It was obvious that people were enjoying the experience. I made sure to ask people what they liked and their responses were usually high praise. I heard a lot of great comments about the ravioli, the Neese popover, the pecan cinnamon bread pudding and the barbecue slider.

Kudos to Carowinds Executive Chef Kris Siuta and the entire Carowinds food services team and staff. This is a world-class event that is only going to get better over the years and with more attention.

One thing I’d like to suggest for next year: what about taste pairings for the food based on the Carowinds roller coasters and attractions? I can see an Intimidator pairing that would include the Beer Basted Pulled Pork Sliders (red slaw, of course), theJalapeño Pimento Cranberry Cheese Ball (it’s got a kick) and the Windy Hill Apple Cobbler (a great way to tie it all together). The Carowinds pairings could lead people to try new tastes and discover a new favorite! And bring in people that might not be daring enough to try some of the tastes.

Did you get to experience Taste of the Carolinas? Did you have a favorite taste?