Carowinds food festival, the Taste of the Carolinas, is underway! You can enjoy this unique food festival every Saturday and Sunday until May 1. Check out the basics of the festival, here!

This year, Taste of the Carolinas is using Taste Tokens instead of cash at each booth. You buy tokens at about a $1.33 a piece (slightly less if you buy 21). You can purchase Taste Tokens at either of the two booths. So, a four-token taste costs $5.32. A three-token taste is $3.99. A two-token taste is $2.66.

There are 21 total tastes and we only sampled nine of them. After our first round of tastes, we walked around the park to take in some of the rides. We actually felt like we’d had a regular lunch and wanted to walk off some of the calories. But that’s the point of a food festival; it gives you the chance to try out different foods and share with family and friends.

The offerings at the Asheville/Mountains booth: 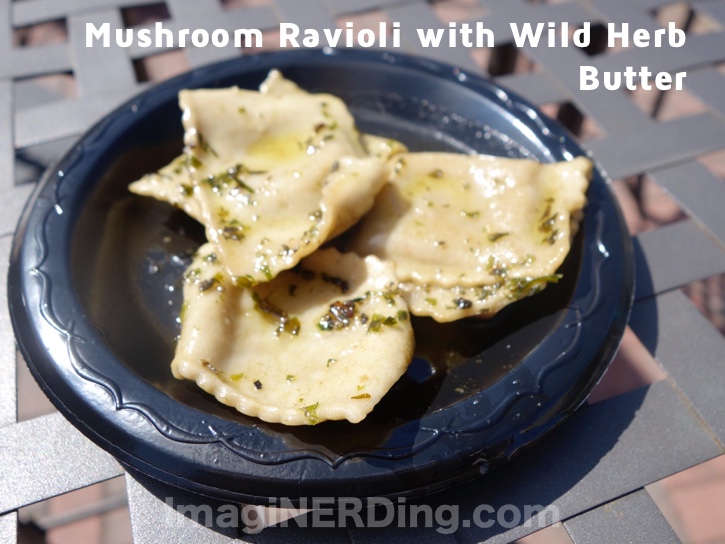 We actually got the mushroom ravioli twice; it was that good. It was rich and warm. The mushroom tasted meaty, with a rich portobello taste. The herb butter  added a nice texture, as well.

The Neese Sausage, Fig and Goat Cheese Popover was my personal favorite. The sweetness of the fig contrasted really well with the subtle spice of Neese’s sausage. The popover was light and airy. I wish it had been bigger!

The Pecan Cinnamon Bread pudding was delicious! It reminded us a lot of Dollywood’s Homemade Cinnamon Bread. This was a dessert that we would seek out if it was Carowinds’s signature food (hint, hint). It was warm but not too sweet. It crumbled without falling completely apart.

I’m a big fan of pimento cheeses and I like to try all of it! I enjoyed this spread, but it was very spicy with the jalapeños. Almost too spicy to finish by itself. It was served very chilled and one a very hot afternoon, it would fit the bill!

The Chocolate Bourbon Pie was a hearty dessert! The darkness of the chocolate and the tart crust mixed well with the aftertaste of the bourbon. The pie was very thick and it was difficult to use the plastic utensils. So we took it out of the pan and attacked it with our teeth! 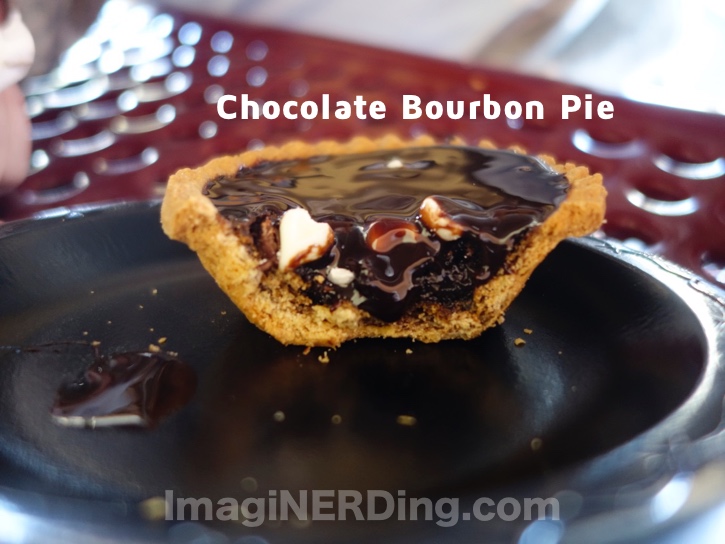 The inside of the Chocolate Bourbon Pie!

I enjoyed the Beer Basted Pulled Pork Slider (have I mentioned how much I love pulled pork?) but found the cole slaw a little overpowering.  The barbecue was Lexington style and the sauce helped tie it together. 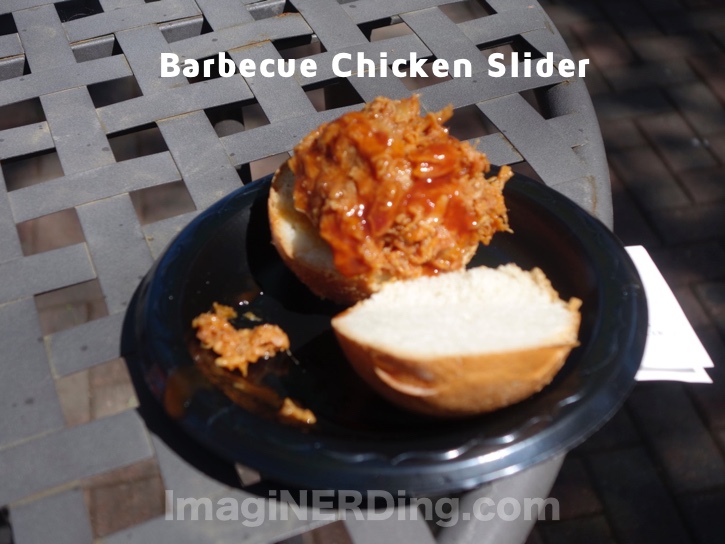 The Barbecue Chicken Slider was very sweet and had beer and honey. It was delicious. Both sliders came on dinner rolls (my wife thought they were adorable) and I would have enjoyed them more eating them open face with a fork.

By the way, the Lexington booth smelled fantastic! 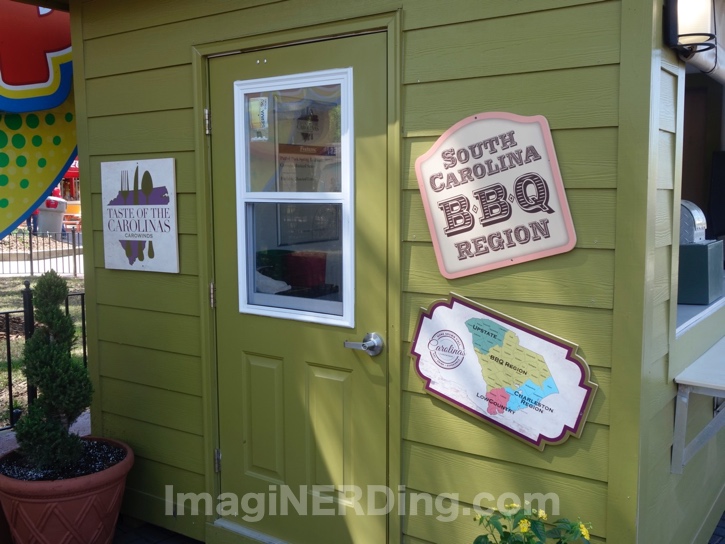 I talked about the booths briefly last year, but I wanted to focus on the graphics again. The sides of the booths show off the care and thought that went into thinking about each region. Kudos to the marketing and graphics teams!

I was surprised by the size of the Puled Pork Spring Roll! It was handmade in front of me and I was delighted to see the ingredients (it looked like cole slaw). And the Carolina Mustard was delicious. It is served cold, which could surprise some people.

The Sweet Tea Glazed Chicken was a good taste, especially for some of the not-too-adventurous-types. The glaze was sweet and tasted more like molasses, but still was very Southern. The chicken was a good portion and very juicy. 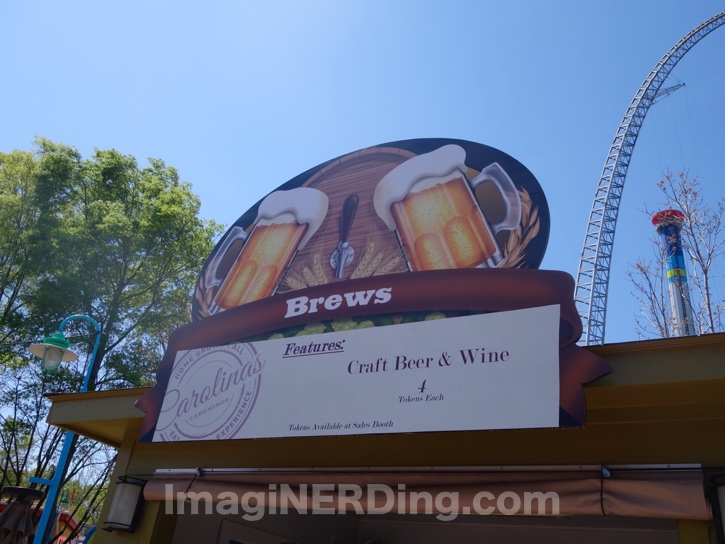 The beer and wine tastes were each four tokens.

Thoughts on the Carowinds Food Festival: Taste of the Carolinas

I’m glad that Carowinds has continued their Taste of the Carolinas food festival. Being located in Charlotte, makes the Carowinds the major player in North and South Carolina. Given that the closest theme parks are still four hours away, Carowinds really is poised to be one of the fastest growing and biggest regional parks in the country.

Making the food festival slightly smaller and keeping it located in the same land were good ways to grow the festival. The Taste Tokens bothered me at first, but it did make it much easier to pay and streamlined the process. The use of tokens allowed the booth staff to focus on the food and not have to fuss over payments.

Executive Chef Kris Siuta should be commended. Not only is the food for  the Taste of the Carolinas on par with Epcot, but the food at Carowinds has seen vast improvements over the last few years. With the addition of new attractions, shows and Carolina Harbor, Carowinds is set to have an amazing summer.

The Taste of the Carolinas is a fantastic way to experience that park before the summer heat and crowds hit.

What’s your favorite taste at the Carowinds food festival? Are there any tastes you’re looking forward to?

One thought on “Carowinds Food Festival 2016”