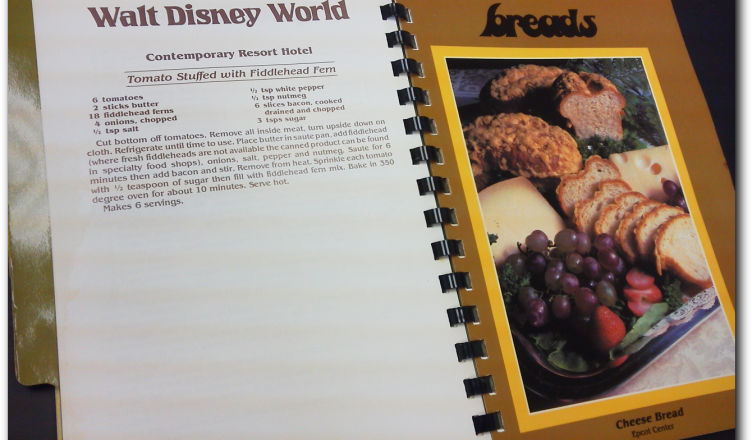 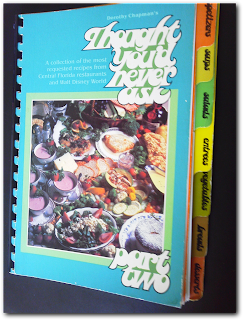 Thought You’d Never Ask, Part Two by Dorothy Chapman (1921 – 2004) was published in 1983 and is one of the first books to reproduce recipes from Walt Disney World restaurants. The first collection was published in 1979 and four, in total, were published. Dorothy Chapman served as the food editor and restaurant critic for the Orlando Sentinel from 1971 to her retirement in 1986. She also made appearances on WFTV-Channel 9’s noontime news show with weekly segments based on her Thought You’d Never Ask column in the paper.

The spiral-bound book is broken up into seven sections and an index. Each section is devoted to a specific food type/course. There are other Orlando eateries featured: Al E. Gator’s; Casa Gallardo; Orange Quarter; Park Plaza; White Marlin; Bakerstreet; Freddie’s Steak House; Le Cordon Bleu; Limey Jims and many more!

As far as a book review, this is an interesting collectible but will only be enjoyed by people that ate at the restaurants during the early 1980s. You could also use it to get an idea for the cuisine served, but it is rather hit or miss and never comes close to offering full menu choices.

As a public service, we are offering an index to Walt Disney World Recipes found throughout Disney-related cookbooks.Here are all of the recipes from Thought You’d Never Ask, Part Two by Dorothy Chapman.