I was approached by Chad Emerson, author of Project Future, to contribute to a book celebrating the first four decades of Walt Disney World. As expected, I readily agreed and prepared my essay about the dormant Treasure/Discovery Island attraction that resided in Bay Lake from 1974 until 1999.

The book, Four Decades of Magic: Celebrating the First Forty Years of Disney World, was released on January 6, 2011.

Being a contributor to the collection of essays, I haven’t felt comfortable adding my personal review of the project. I read the Yesterland review posted by Werner Weiss and felt that he expressed the sames thoughts and concerns that I hold about the project.

I contacted Werner and he graciously agreed to allow me to re-post his review at Imaginerding. Yesterland is an amazing and incredibly detailed site dedicated to the extinct attractions of Disneyland. Make sure to head on over and spend some time! 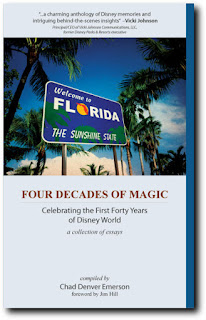 It’s no secret that 2011 marks the 40th anniversary of Walt Disney World. The “Vacation Kingdom of the World,” as it was originally tagged, opened on October 1, 1971. It’s a good time to reflect on the how Walt Disney’s vision for a Disneyland East and the real city EPCOT have evolved into what it is today.

With the milestone 40th anniversary in mind, Chad Emerson—a Professor of Law at Faulkner University and author of the 2010 book Project Future: The Inside Story Behind the Creation of Disney World—had an idea for new book. Emerson would reach out to bloggers, website authors, and podcasters who had demonstrated a passion for Walt Disney World and its history. He would invite these experts to contribute one or two chapters each, dealing, in some way, with the first 40 years of Walt Disney World.

The book would not attempt to present a complete chronology of the 40 years. Instead, the authors would each choose one or two interesting topics. The goal was to publish a collection of essays, each reflecting the knowledge, perspective, and style of its author.

The resulting book, Four Decades of Magic: Celebrating the First Forty Years of Walt Disney World, contains 28 essays, an introduction, and a forward.

When I first saw the list of contributors, I recognized more than half the names. Kevin Yee and Sam Gennawey are well-known to readers of MiceAge for their excellent weekly columns. Jim Korkis collaborated with me on several Yesterland articles; he is highly respected for his work at several of the best-known Disney fan websites and for his recent book, The Vault of Walt. Mike Lee is the man behind the terrific Walt Disney World history website, Widen Your World.

In most cases, when I didn’t immediately recognize names on contributor list, it turned out that I was aware of their work, just not their names. For example, Foxx Nolte is the blogger FoxxFur at Passport to Dreams Old and New. George Taylor runs Imaginerding.com. And Chuck Mirarchi is a columnist for WDW News Today.

The authors picked topics that they know well.

Jim Korkis has spent years piecing together the real history of Pleasure Island and its convoluted backstory. (The story is that all the buildings of Pleasure Island once belonged to entrepreneur Merriweather Adam Pleasure.) Korkis has given presentations on the subject and has written shorter articles. In Four Decades of Magic, Jim provides a thorough 18-page essay, which brings it all together.

Another of my favorite essays is “Joe and Carl, Two Men Who Built the World,” by Didier Ghez from the Disney History blog. It’s about Joe Fowler and Carl Bongirno who tackled challenge after challenge to transform Disney’s swamps and forests into Walt Disney World by the planned opening date. Ghez uses long quotations to let the people who lived through it tell much of the story.

Michael Crawford of Progress City, U.S.A. describes how the defunct Horizons attraction at EPCOT Center was conceived and what it offered. There are fascinating details about the discussions with General Electric and early ideas that were considered and abandoned.

As I read the various essays, I realized that Emerson picked an excellent roster of Walt Disney World experts. I enjoyed their work very much.

I wish I could have unqualified enthusiasm for everything about this book. Unfortunately, I can’t.
The book needed a copy editor, but it didn’t have one. Most chapters are quite professional anyway, but a few have glaring problems with punctuation, capitalization, nomenclature, and wording. Throughout the book, it would have been good to have consistent style standards for when and how to use italics, quotation mark, dashes, and commas. I can appreciate that this book is essentially a labor of love by all involved, and professional copy editors are costly. However, even if Chad Emerson had personally put in a day or two of additional effort, the result could have been a more professional, easier-to-read book.

The essays are in alphabetical order by the author’s last names. That was an easy approach and may have avoided offending any authors. However, it presents an odd flow to the reader. There are cases where one essay could have been a good lead-in to another, but, instead, related essays are scattered throughout the book. Two essays about the Hoop Dee Doo Revue (one by Greg Ehrbar and one by Chuck Mirarchi) are separated by ten other essays. Sometimes there’s a happy coincidence, such as the “History of the Contemporary and Polynesian Resort Hotels” by Chuck Mirarchi being right before “Walt Disney World Hotels That Never Were” by Lou Mongello of WDW Radio; it’s a good thing both authors’ last names begin with M.

I realize that the authors picked their own topics, but that made for a collection that doesn’t really deliver a perspective on the four decades of Walt Disney World. That’s fine long as you know going in that this is an anthology of random topics about Walt Disney World—which is why I’m mentioning it here.

I wish more chapters had footnotes and/or bibliographies (some do, some don’t), or at least authors explaining how and why they know the details. Apparently, the authors were not given guidelines in this regard. While I realize these are not academic papers, I sometimes wished that I could have had more complete confidence in the “untold stories” in the book. I’ve read enough prior work by most of the contributors to trust their work, but, in some cases, I wondered where the information came from.

These observations don’t mean that I think it’s a bad book. It contains very good essays, which makes it a shame that the final product lacks some of the care that one expects from a published book.

I feel good about recommending Four Decades of Magic to anyone who is interested in the subject matter. Because it’s a collection of essays, it’s the kind of book that you can read for 10 minutes here and 30 minutes there. It would be good vacation reading—especially if your vacation plans include Walt Disney World.