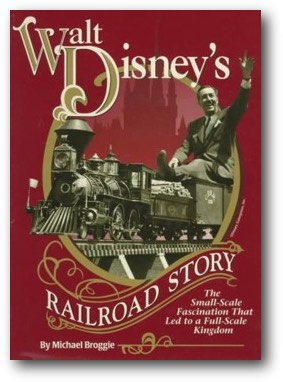 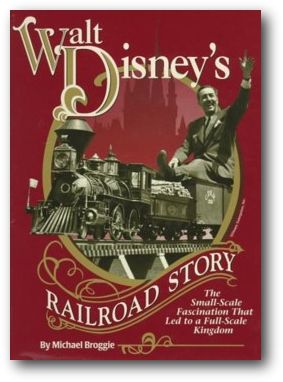 Less than a month before Disneyland’s opening day in 1955, Walt journeyed to the under-construction theme park for the first live steamup of locomotive No. 2. This was the culmination of a lifelong dream for Walt as…

…he climbed into the cab, moved the Johnson bar forward, tugged twice on the steam whistle, and pulled open the throttle. With Harley Hgen in the fireman’s seat and this book’s author (as a wide-eyed 12 year old) sitting on the tender, Walt eased No. 2 from the roundhouse into the bright Californian sun and onto the main line. -p. 231.

Imagine that moment in Walt’s life; after years of making films and building the Company, he finally finds himself as the Chief Engineer of a real engine. His engine.

Walt Disney’s life had been surrounded by trains. Family members worked on passing railroads. Both Roy and Walt were news butchers during their teens. Many of the animators at Disney were rail fans: Ward Kimball traveled with Walt to the 1948 Railroad Fair and had his own backyard, full-sized railroad; Ollie Johnston also had a backyard railroad. Many of the Studio employees shared Walt’s love of full-scale and miniature railroading. For the first half of the 20th century, railroads were the future of the country. They symbolized progress and growth.

Roger Broggie is considered to be Walt’s first Imagineer. A very talented machinist, Roger supervised the building of the Lilly Belle, Walt’s 1/8 scale engine that ran at his Holmby Hills home. He also helped create the first Audio-Animatronic character. Roger’s sons, Roger Jr. and Michael (the book’s author), spent many years “working” at the studios with their father and helping Walt on the Disneyland Railroad. Citing Michael’s close association with the Disney family, the Disney Company and Walt’s railroads, he is uniquely qualified to write a biography about Walt Disney that focuses on how railroading affected his life and drove many of his passions.

Why Should I Buy Walt Disney’s Railroad Story?

Walt Disney’s Railroad Story is a fantastic journey from Walt’s boyhood through the theme parks. We encounter every significant moment of his life in reference to trains and we come to understand his passion for the steel. This is also a treat to read about Walt from a company insider whose family worked and works for Disney.

You get pictures on every page and a chronological look at the history of Walt’s trains and railroads. Michael adds side tracks as needed that go into further detail; whether it is on a railroading term or a person. There is a lot of focus on the Carolwood-Pacific line that was built at the Holmby Hills property. Walt spent a lot of time creating the layout (with Roger Broggie and Eddie Sargent) and entertaining guests. A majority of Walt’s ideas about Disneyland were formulated while conducting the Lilly Belle. Michael covers every train built for a Disney theme park up to the Animal kingdom. Michael includes a glossary of rail terms, a detailed specifications of all the Disney engines and a bibliography. My only negative comment is that there was not a layout of the Carolwood-Pacific line. The author responded to my complaint—there is indeed a layout on page 113. This goes to show that Michael Broggie has indeed created and amazing and fact-filled tome about Walt Disney and his Railroads.

This book has quickly become one of my favorites. Along with The Nickel Tour and Since The World Began, it is one of the treasures in my collection. If you have any interests in Walt’s personal life, railroads or the Disney engines that chug the tracks all over the globe, then you need to own this book.

Do You Own This Book About the Trains and Railroads of Disney?