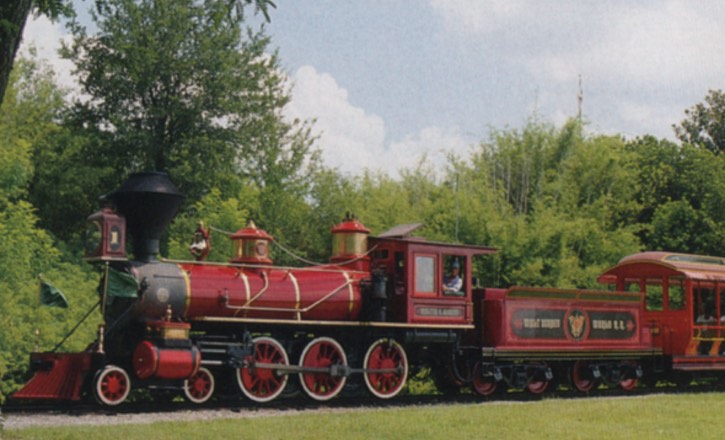 Four out of five Disney historians will agree* that Walt’s love for steam trains was one of the motivating factors that led to Disneyland. Trains were a large part of his life growing up in the midwest and served as one of Walt’s first jobs as a news butch during his teen years. When Walt first started thinking about a theme park, a steam train was always part of his thoughts. As the dream progressed from a small park near the Burbank Studio to Disneyland, Walt continued to anchor the designs with a train.

As an author, you would be hard-pressed to write about Walt Disney and trains and not mention the Carolwood-Pacific. When Walt moved his family to the Holmby Hills neighborhood in 1949, he realized that he had enough land to create a backyard railroad. With the help of studio workers and Roger Broggie (known as the first Imagineer), Walt constructed over 2,600 feet of track, a 1/8 scale engine and several cars. The engine was called the Lilly Belle, in honor of Walt’s wife, Lillian. This is a tradition that would recur even after Walt’s passing. After a derailment and minor injury to a young patron, Walt had Roger store the engine at the Studio. The Carolwood-Pacific stopped running in 1953.

While the initial plans for Disney World began to take shape after Walt’s passing, Roy wanted to remain as true to his brother’s dreams as the organization could. As Walt has been oft-quoted, he never wanted to do sequels, so there is some discussion as to what kind of theme park would have developed if Walt had lived a few years longer. In the Master Plans for Walt Disney Word there has always been a theme park in the northern part, near Bay Lake. At the Destination D: 40 Years of Adventure event at Walt Disney World in May 2011, Tony Baxter commented on some of the attractions that never were. With archivist Steve Vagnini, Tony shared concept artwork from the late 1960s that detailed a Magic Kingdom with a few different attractions. When the ideas were presented to Roy, he impressed upon the Imagineers that he wanted to honor his brother’s ideas that were so successful at Disneyland.

Roger Broggie is synonymous with the railroads of Disney. As the Vacation Kingdom of the World began to take shape, Roger found himself in charge of designing the transportation system; a similar job he held at Disneyland.  After spending some time in Florida, Roger surmised that the grade of the Florida property could rise up to 2%, which would require a stronger engine than the ones in use at Disneyland. Roger wanted to make a trip to Mexico to “look at some old Baldwins” and he invited Earl Vilmer, the railway builder for Disneyland, to accompany him. One of Roger’s regrets about the trip was not being able to bring landscaper Tony Sepulveda because of his bilingual abilities. Broggie and Vilmer landed in the Yucatan on May 6, 1969. The Mexican Government was selling their steam engines since they were converting to diesel engines1.

The first two engines that Broggie and Vilmer picked out were numbers 274 and 275. These engines would eventually become the Walter E. Disney and the Roger E. Broggie. Both engines are 4-4-0 and were made by the Baldwin Locomotive Works. They were originally shipped to the Yucatan in May, 19253.

Railroad engines are classified by their wheel arrangement. The Whyte Notation system is the standard used in the United States and counts the number of leading wheels, the number of drive wheels and the number of trailing wheels. For example, the Walter E. Disney is a 4-6-0 and is known as a ten-wheeler.

Engine 260 was a “Mogul”-type and was manufactured in 1928 by Baldwin. It was a 2-6-0 and would be known as the Lilly Belle. The fourth engine, a 4-4-0 was built in 1916. It would take guests on the Grand Circle Tour as the Roy O. Disney. A fifth engine was purchased but it would not be added to the Magic Kingdom fleet. It was a 2-6-0 built by the Pittsburgh Locomotive Works in 1902. Each of the four engines costs $8,000 each; the Mexican Government sold the fifth one for $750 if Broggie and Vilmer paid to have it moved. When the engine was moved, it was damaged considerably, which may have led to it not being used. Broggie mentions that the Mexican Government threw in “brass bells, whistles, light housings, and other fittings” for free. They had run into a large pile of cast-offs and took as much as they could4.

To ship the engines to the Tampa Bay shipyard across the Gulf of Mexico via Mississippi barges turned out to be fairly expensive, even though the trip was only 700 miles. Roger found out that it would cost three times as much to ship over water as opposed to a rail journey of 2000 miles. Two shotgun-armed guards rode with the train until it reached the border5. When the engines reached their destination at the Tampa Ship Repair and Dry Dock Company, they were put under the care of George Britton, a machinist who would eventually become the roundhouse foreman at Walt Disney World. Bob Harpur, who had known Walt Disney in California through model railroading, was hired as the project engineer and he found himself working for Transportation Superintendent Earl Vilmer6.

The Imagineers designed the 20 excursion cars  after the RETLAW 1, the original passenger car at Disneyland.  The cars were built from scratch at the Tampa Shipyard and were designed to load much quicker and easier than their Disneyland counterparts. The excursion cars resemble the Narragansett-style coaches from Disneyland; they are 40 feet long with 15 benches and can carry 75 passengers8.

The steam trains were the first attraction completed for the Magic Kingdom. The Lilly Belle was the first engine completed and delivered to the park. The Walter E. Disney, the Lilly Belle and the Roger E. Broggie were all in service on October 1, 1971. The Roy O. Disney started on December, 1, 1971 and the Ward Kimball began service on March 1, 199711. Bill Norred, a railroad equipment collector wanted to buy the five RETLAW 1 coaches that had been in service at Disneyland. Disney Management offered the coaches in return for a Forney-style 0-4-2T built by the Davenport Locomotive Works. Norred had the engine rebuilt as a 2-4-4T. The Disneyland Railroad wanted to use it while the Disneyland engines were being refurbished. Instead, it went to Walt Disney World and was named the Ward Kimball. It was put in use while the Lilly Belle was refurbished12.