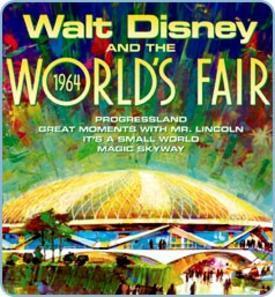 Walt Disney and the 1964 World’s Fair 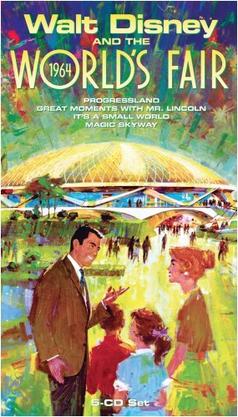 It’s a Small World, The Carousel of Progress and Great Moments with Mr. Lincoln are household names to most Disney enthusiasts. Those names are inexorably tied to the 1964/1965 New York World’s Fair and represent a watershed for W.E.D. Enterprises and the art of the theme park attraction. No less well-known (but not in any recent complete incarnation) is the Magic Skyway. The Magic Skyway pavilion was not sent back to Disneyland in its entirety; you can experience part of it in the Primeval World section of the Grand Canyon Diorama during the Disneyland Railroad. It’s a Small World exists in each Magic Kingdom-style park. Born as Progressland, the Carousel of Progress now resides at the Magic Kingdom after a few years at Disneyland. Great Moments with Mr. Lincoln premiered at Disneyland after the first season of the Fair and re-appeared at the Opera House in December 2009.

Almost 45 years after the opening of the 1964 New York World’s Fair, Walt Disney Records has released a 5-CD box set of the recordings from the four Disney-created attractions at the Fair.

So, why is this Boxed CD-Set important?

Ever since the popularity of Disneyland consumed most of the surrounding area in Anaheim, Disney had been searching for another place to build a larger project and practice some of his burgeoning ideas on planning and urbanism. When Disney was approached by the Fair to create pavilions for General Electric, Ford, Illinois and Pepsi, he saw his opportunity to try out Disneyland-style attractions on the East Coast and have other people pay for the development of the new attractions.

The 5-CD box set is an aural history of the pavilions with original source audio and never-before-heard demo tracks, alternate takes and attraction music. During my first listen, I found myself at the computer looking for images and videos of the attractions from the Fair. I could only imagine how exciting the Disney attractions must have been to a population that had largely experienced true Disney magic only on television and in theaters. Needless to say, this CD set offers hours of enjoyment for the Disney enthusiast. With four attractions featured, you might be pondering the reasons for a fifth disc. The bonus disc contains the 27-minute Alternate Universe Version of the Carousel of Progress–it is a great look at what might have been. Some of my other favorites, include: the Sherman Brothers and Disney singing There’s a Great Big Beautiful Tomorrow; Royal Dano’s recording session for Great Moments with Mr. Lincoln; the Disneyland Paris versions of It’s a Small World; and Disney’s narration for the Magic Skyway and his dialog recording session with Marty Sklar.

The 24-page full color booklet that accompanies the set is a beautiful introduction to Disney and the World’s Fair. Filled with rare photographs, intriguing text and track descriptions; you will find yourself dreaming of a visit to the Fair to experience it firsthand. I am not implying that the booklet offers nothing for the enthusiast, Stacia Martin, the author, has included enough nerdy tidbits to make all of us happy.

The audio quality is superb and runs roughshod over the bootlegged versions that have been floating around. Randy Thornton and Jeff Sheridan have done an incredible job mastering and compiling the tracks.

A review of the set would not be complete without a mention of the late Bruce Gordon. What we hold in our hands is an evolution of a dream shared by Bruce and Tony Baxter from more than twenty years ago. Bruce worked tirelessly to keep the project moving and involved a very talented group of Disney castmembers. When I interviewed Randy Thornton and Stacia Martin about their thoughts on the project, they both expressed how the project would never have been without Bruce Gordon. Randy and Stacia were fervent in their statements that Bruce’s vision continued to lead the project after his passing. 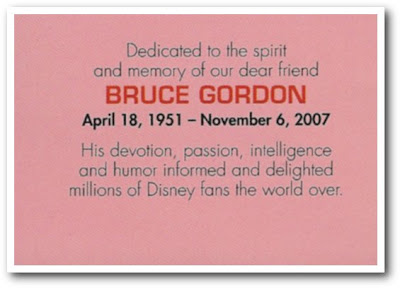 This is an amazing CD set that needs to be in your collection.