Peter Pan on Blu-ray, a review

Peter Pan was released on blu-ray in February, 2013. George and Jeff reviewed the combo blu-ray on Communicore Weekly (the Greatest Online Show™). Do you own this classic film on blu-ray?

George: Peter Pan is one of the most beloved animated films of all time. Disney has just released it on Blu-ray and I assume that both Jeff and I will agree that it is a must-have. Besides the crystal-clear sound and the hi definition video, the real question is whether the extras stack up.

Jeff: I definitely agree that Peter Pan is one of the crown jewels of Disney animation, and the movie alone is a must have for folks on blu-Ray. But to sweeten the pot even more, the host of extra features that Disney packs onto the disc make it an even more worthwhile purchase. The stand out, of course, is the short documentary “Growing Up With Nine Old Men.” This short film catches up with the children of the famous Nine Old Men who worked in Disney Animation, all of whom share some fantastic stories about their fathers and Walt.

George: I watched the “Growing Up With the Nine Old Men” segment with my wife (she’s working on her Disney Nerd Merit Badge) and she thought it was an incredibly sweet film. I wasn’t sure what to expect with it, but it was incredibly charming. To see the children of these amazing animators talk about their fathers and what living with them was like was truly eye opening. Apparently, the Nine Old Men were regular dads that had to discipline and plan birthday parties!

Jeff: While that alone is well worth the price of the blu-ray, there are some other bits as well to help round out the package. I especially enjoyed the two deleted songs, which were animated by storyboards. There were also a few deleted scenes as well, which weren’t overly spectacular, but did give a little more insight into the story.

George: Historically, Peter Pan is a film that Walt and the staff worked on for years. I can’t imagine that it would be as beloved today if it had been released in 1940s. The animation staff and the technology made huge strides after Snow White. To me, it’s one of those amazing films (like Mary Poppins) where everything came together. Of course, you have to overlook a lot of the stereotypes in the film, but it’s the same with most animation and theatrical releases of the time period. It’s still an incredibly charming film. 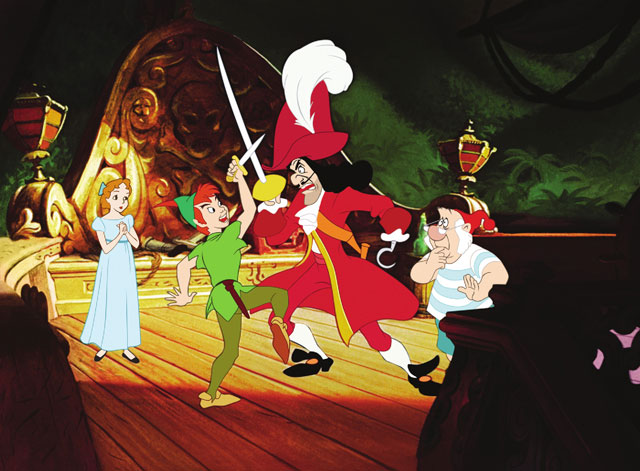 Jeff: Technically, the film looks amazing with this blu-ray transfer. They did an amazing job of “renewing” the film, and making it really jump off the screen. I know some purists may cry foul, but the removal of the film grain actually makes the colors more vibrant. The film has never looked better.

Do you consider Peter Pan to be a Disney classic? Are you looking to add it to your collection?