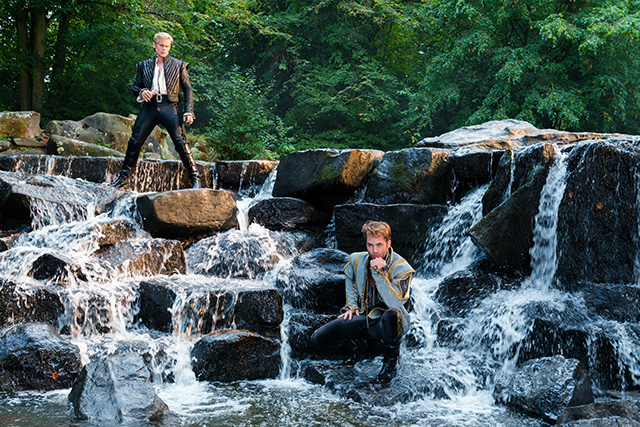 Into the Woods on Blu-ray, a review

Into the Woods was released on blu-ray in March, 2015. Jeff and George originally reviewed this blu-ray combo on Communicore Weekly (the Greatest Online Show™). Have you had the chance to see this star-studded adaptation?

George: I’d never heard of Into the Woods before the release of the theatrical film during the holiday season of 2014. From the advertising, it looked like it was going to be pretty dark and frightening. I didn’t see it in the theaters, but I knew we’d get a review copy. Now, I’m wishing that I’d seen it in the theaters or at least a live production of it. 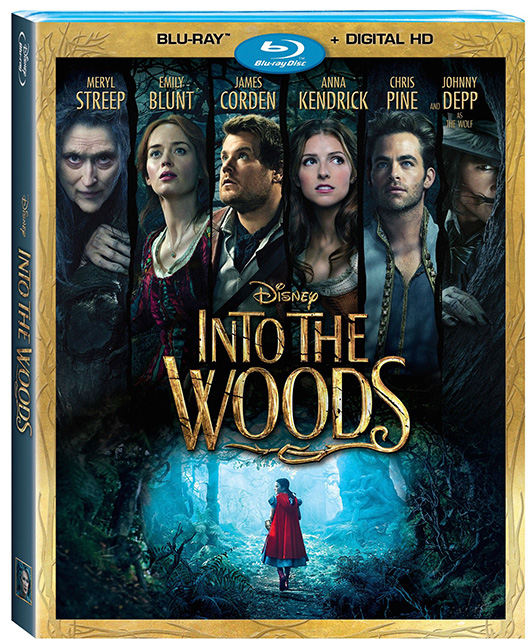 Jeff: I HAVE heard of Into the Woods, and I’ve even been in the show before. I was a little concerned when Disney announced they were making the film version, considering some of the more, ummm, mature themes in the show. That said, after seeing the film in the theaters, I was pleasantly surprised!

George: You played air guitar in the show?

Jeff: I’m a man of many talents, George.

George and Jeff act out a scene from Into The Woods.

George: Anyway, I was really surprised at how much I enjoyed the film. My youngest was excited about it, based on the trailer he saw, and he did watch the entire film, despite the length and slow pacing. It was just shortly after the happy ending of the film that he got a little bored with the story. Still, he enjoyed it, overall. We did find ourselves singing to each other for the rest of the evening, even though we weren’t in an actual musical. So, what’s the film about?

Jeff: For those of you who DON’T know, the show is kind of like the TV show Once Upon A Time, in a way. All of the fairy tale characters you know and love live near each other, and their stories intertwine. However, unlike the TV show, this is actually good. Really good. We follow their stories, as we normally remember them, until their happy endings are achieved. And then, you think the story is over. However, it is not. Not even close. Not at all. You’ve just reached the midpoint.

George: That really surprised all of us, as well. It seemed like everything worked out perfectly and then…well, spoilers. The movie was gorgeous and sounded amazing. With a musical, you need everything to be clear; the orchestration and voices were pristine and never seemed to overlap. Even though I had no basis for the musical, I thought the casting was brilliant.

Jeff: Agreed. Even with me being tired out over Johnny Depp, I like how his role was confined to just that of the Big Bad Wolf here (in the show, the same actor usually portrays a few other roles as well). That said, each of the casting choices worked extremely well, but to me, the stand out was Meryl Streep. She was FANTASTIC.

George: Meryl Streep is always fantastic, but she really made this role. I did watch most of the extras, which focused on how they turned the musical into a film. It really explained a lot, especially to someone like me who isn’t familiar with the show. There were also the regular extras, like casting, costumes and sets. And boy, were those sets impressive!

Jeff: I did quite enjoy the commentary from Director/producer Rob Marshall and producer John DeLuca as they talked about bringing the original stage show to life for the screen. It was interesting to hear them talk about developing the language of the movie through song. I also really liked “She’ll Be Back,” a deleted song Sondheim wrote for Streep that was meant to follow Rapunzel’s decision to leave the Witch once and for all.

George: I forgot to watch that one! I’ll need to go back and check it out. I’ve always been a big fan of the Disney musicals (Newsies and the animated features), but my parents never really watched any while I was growing up, so I’m experiencing a lot of them as an adult. I’m very pleasantly surprised at how much I’ve been enjoying musicals of all different types and periods. If you’ve never experienced Into The Woods before, then I really urge you to pick up a copy. Or at least rent it.

Jeff: To me, because I am a theater nerd, this is a definite purchase. The film is great, they did a wonderful job translating it to the screen, and I love the music. what isn’t there to like about it?!

George: That it’s not Frozen 2: Into the Woods?

Jeff: The only thing better would be an Evil Dead musical. Oh wait!!

What did you think about Disney’s film adaptation of Stephen Sondheim’s musical Into the Woods?