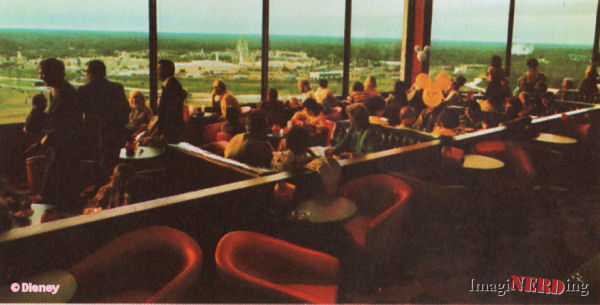 Top of the World at the Contemporary Resort

The Top of the World wasn’t always a Disney Vacation Club members-only lounge. Throughout the 1970s and 1980s, the Top of the World was the premiere dining and entertainment spot in all of Walt Disney World, especially during the years when the Magic Kingdom would close at 6:00pm and there wasn’t much else to do.

Brown leisure suits, ruffled dresses, strappy heels, shiny jumpsuits and feathered hair were all but required at the Top of the World in the 1970s. A glass-enclosed eatery on the 15th floor of the Contemporary, the Top of the World offered views that stretched 30 miles in every direction while offering the finest in dining and entertainment in Central Florida. Where else you could you enjoy Roast Duck with Orange Sauce, Veal Romanov and Rose Petal Salad while being entertained by the likes of Carol Lawrence, Jack Jones and Phyllis Diller? And no, the dining plan wasn’t offered at the time! 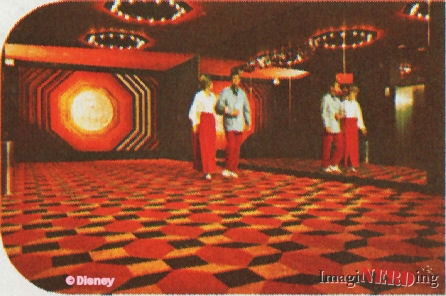 A little background on the Top of the World from our favorite Disney historian, Dave Smith:

Nightclub/restaurant on the 15th floor in the Contemporary Resort at Walt Disney World: open from October 1, 1971 until September 30, 1993. The view over the Seven Seas Lagoon toward the Magic Kingdom is spectacular. The longtime dinner show presented twice nightly was “Broadway at the Top,” with talented performers singing hit numbers from Broadway shows, and the all-you-can-eat Sunday brunch was also popular. The restaurant was replaced by the California Grill in May 1995. 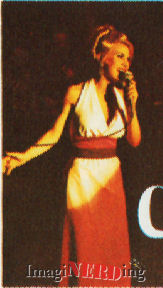 THE TOP OF THE WORLD, high atop the Contemporary Resort Towers, offers the finest in day and evening dining and entertainment. Delicious breakfast buffet, Monday through Saturday, 8-10:30 am. Luncheon buffet, 11:30 am-2 pm. Sunday brunch buffet, 8:30am-2:30pm.

It’s a new world after dark as the Top of the World presents two dinner/dancing shows nightly, featuring top name entertainment in a relaxed atmosphere. Seatings for dinner are at 6:30 and 9:30 pm, with shows at 8 and 11 pm. Top of the World Lounge open until 2 am. Reservations for the evening are suggested; coats for gentlemen, please. 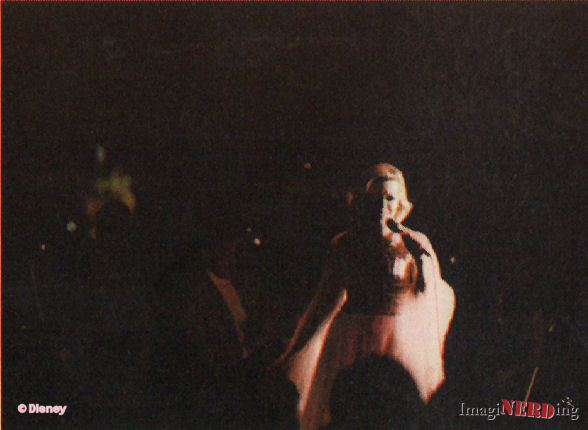 An entertainer from the 1977 Walt Disney World Pictorial Souvenir.

As you settled in for your evening meal and entertainment, your server would take your drink order. Interested in any of the following?

People even ate at the Top of the World in the daytime! From the 1977 title.

From the resources that I checked, the Top of the World might have been well-known for their salads:

From the seminal Walt Disney World: The First Decade.
The Summer 1978 Walt Disney World News announced that comedy groups would start appearing at the Top of the World in addition to the traditional lounge-club style of entertainment. There was also an entertainment charge of $7.50 for adults and $3.50 for children that was levied in the late 1970s. 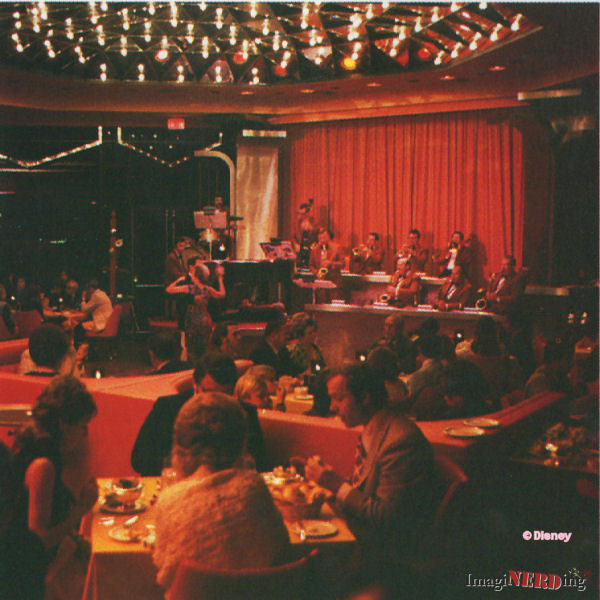 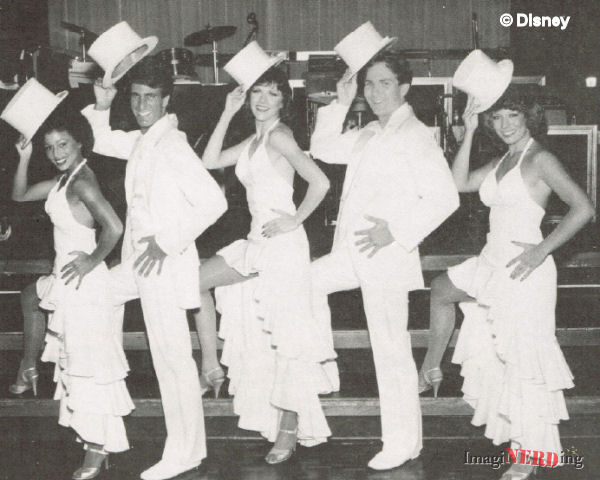 In 1982, Disney introduced Broadway at the Top:

…a lively show highlighting the spectacular best of Broadway’s past 30 years. It’s a fast-paced nightclub review of Broadway musicals from the days of Cole Porter to “Chorus Line” and “Evita.” Songs, dances and dialogues pay tribute to some of the Great White Way’s memorable moments, and to the people who made them happen.

The cast includes five exciting young entertainers who take you on a musical memory tour through the “show stoppers” of the American Musical Theatre. 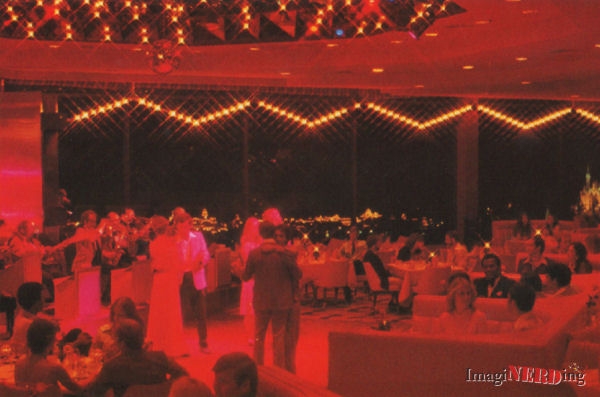 .
Sadly, there were only a few desserts mentioned in my sources:

I can imagine fried ice cream, flambe-style desserts and other, weirdly decadent dishes, as well. 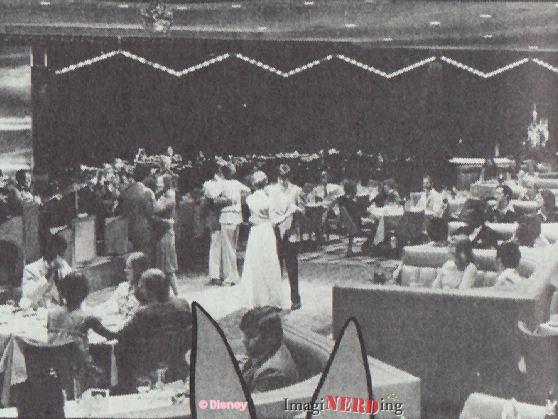 Image from the 1985 Steve Birnbaum’s Guide to Walt Disney World. The ears belong to Br’er Rabbit. 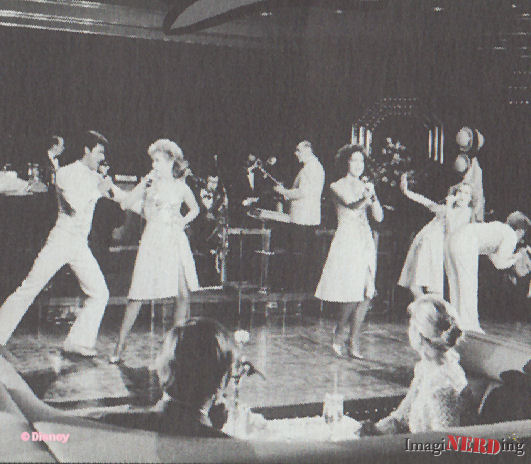 Broadway at the Top from the 1991 Steve Birnbaum’s Guide to Walt Disney World. 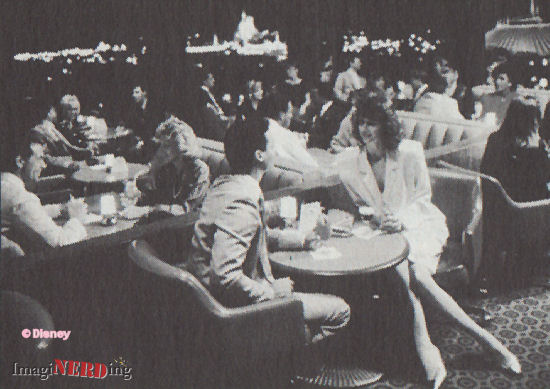 This is image is attributed as the Top of the World Lounge in the 1991 Birnbaum. Apparently, this is a room off to the side of the restaurant. 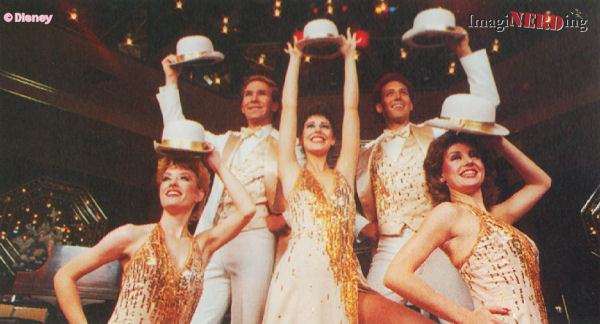 Official records state that the Top of the World closed on September 30, 1993 and re-opened as the California Grill on May 15, 1995. I don’t doubt this but I know that my wife and I ate at the Top of the World twice during a May 1994 vacation. When I found the receipt it was billed as the Concourse Grill. I remember it vividly for two reasons: we could see EPCOT ’94 as we ate and it was the first time I ever saw guacamole (yuck). Both times were for lunch, so it might have only been open for certain times.

We turn to Dave Smith, again, to learn about the California Grill:

Restaurant on the top floor of the Contemporary Resort at Walt Disney World, taking the place of the Top of the World. It opened on May 15, 1995. The restaurant features a stage kitchen with nine exhibition cooking areas, including a wood-burning pizza oven, grill and rotiserie, and three island stoves. 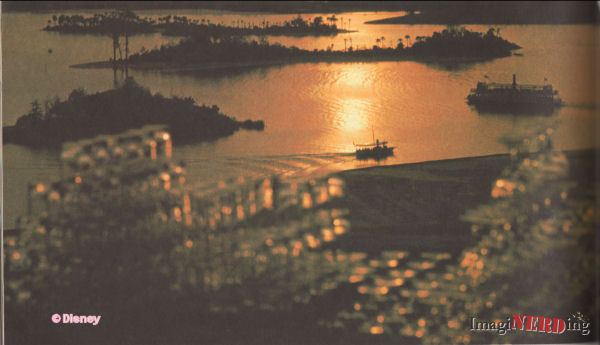 Image from Christopher Finch’s The Art of Walt Disney.

The final image is probably characteristic of why the Top of the World was so beloved: the views. Glasses perched upside-down, waiting to be filled and whisked to thirsty diners, frame the view from the restaurant. A ferryboat and motorlaunch ply the lagoon in the setting Florida sun as we close the chapter on another piece of Walt Disney World history.

Did you ever get to eat at the Top of the World?

Do you have any favorite moments, stories or photos to share?

Resources used for this article:

22 thoughts on “Top of the World at the Contemporary Resort, a History”