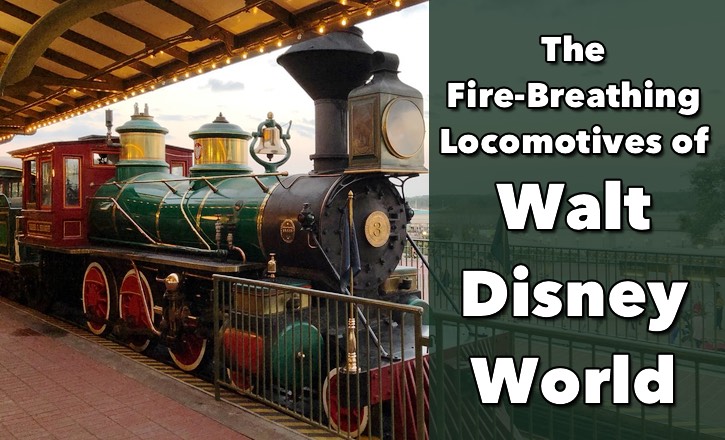 All Aboard The Fire-Breathing Locomotives of Walt Disney World! 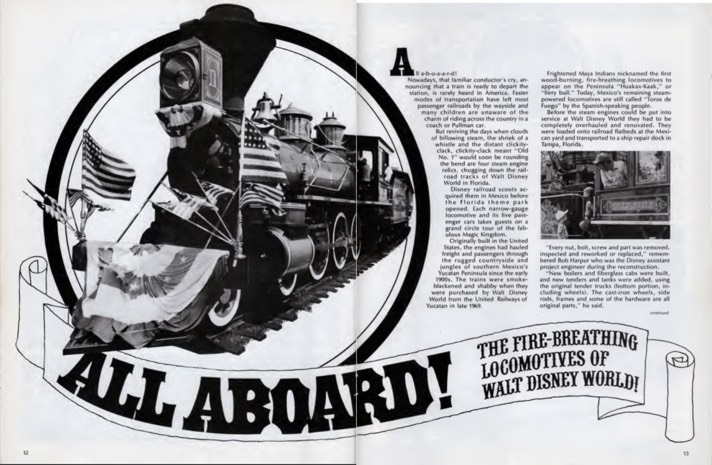 Nowadays, that familiar conductor’s cry, announcing that a train is ready to depart the station, is rarely heard in America. Faster modes of transportation have left most passenger railroads by the wayside and many children are unaware of the charm of riding across the country in a coach or Pullman car. 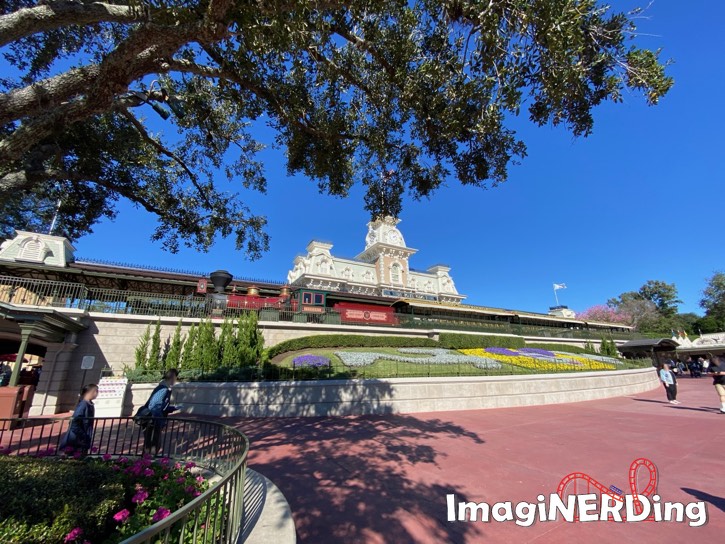 But reviving the days when clouds of billowing steam, the shriek of a whistle and the distant clickity-clack, clickity-clack meant “Old No. 1″ would soon be rounding the bend are four steam engine relics, chugging down the railroad tracks of Walt Disney World in Florida.

Disney railroad scouts acquired them in Mexico before the Florida theme park opened. Each narrow-gauge locomotive and its five passenger cars takes guests on a grand circle tour of the fabulous Magic Kingdom. 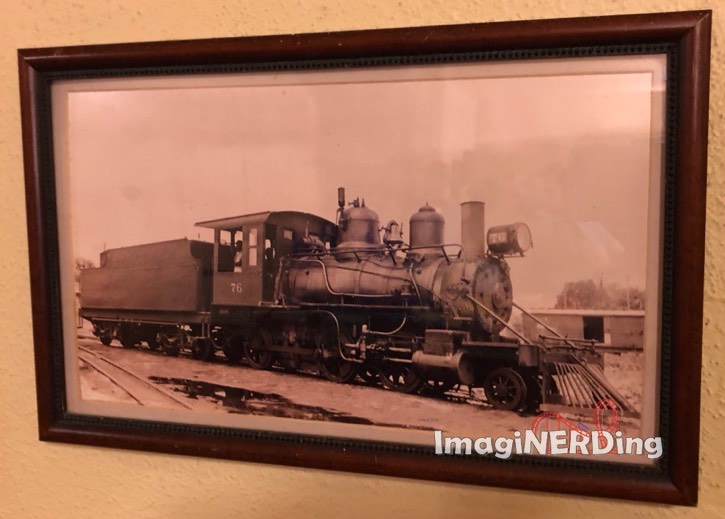 Originally built in the United States, the engines had hauled freight and passengers through the rugged countryside and jungles of southern Mexico’s Yucatan Peninsula since the early 1900s. The trains were smoke- blackened and shabby when they were purchased by Walt Disney World from the United Railways ofYucatan in late 1969. 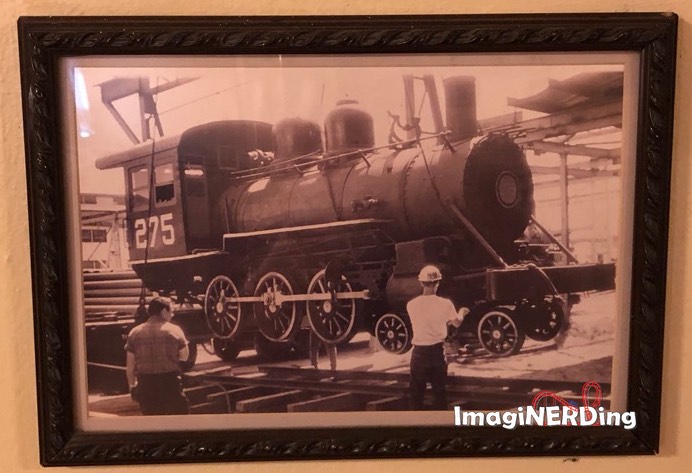 Before the steam engines could be put into service at Walt Disney World they had to be completely overhauled and renovated. They were loaded onto railroad flatbeds at the Mexican yard and transported to a ship repair dock in Tampa, Florida. 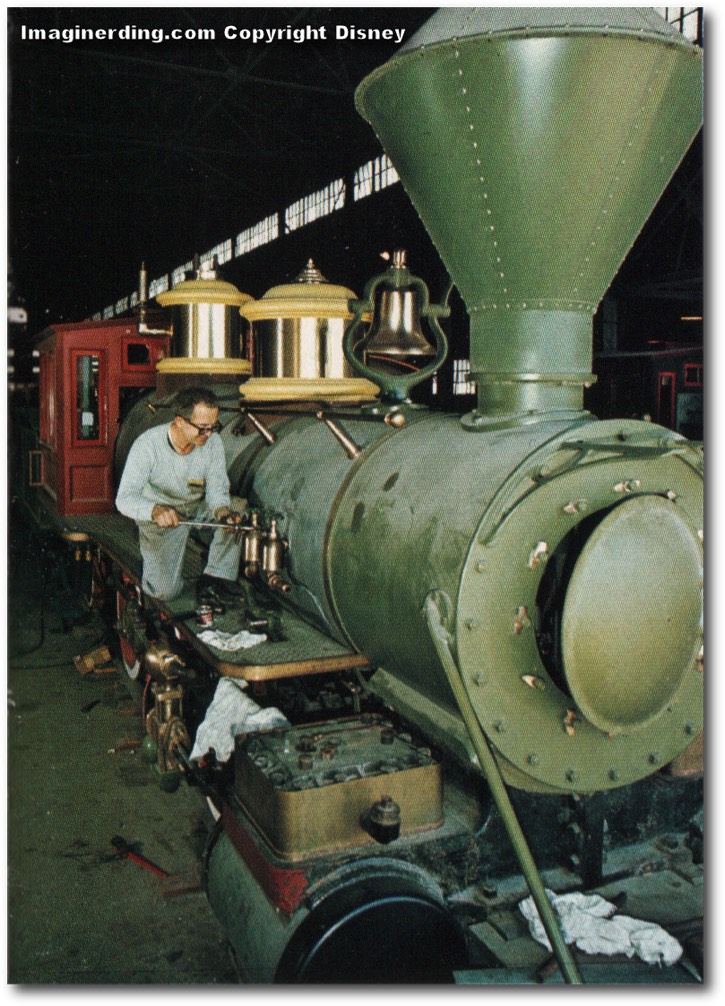 “Every nut, bolt, screw and part was removed, inspected and reworked or replaced,” remembered Bob Harpur who was the Disney assistant project engineer during the reconstruction.

“New boilers and fiberglass cabs were built, and new tenders and tanks were added, using the original tender trucks (bottom portion, including wheels). The cast-iron wheels, side rods, frames and some of the hardware are all original parts,” he said. 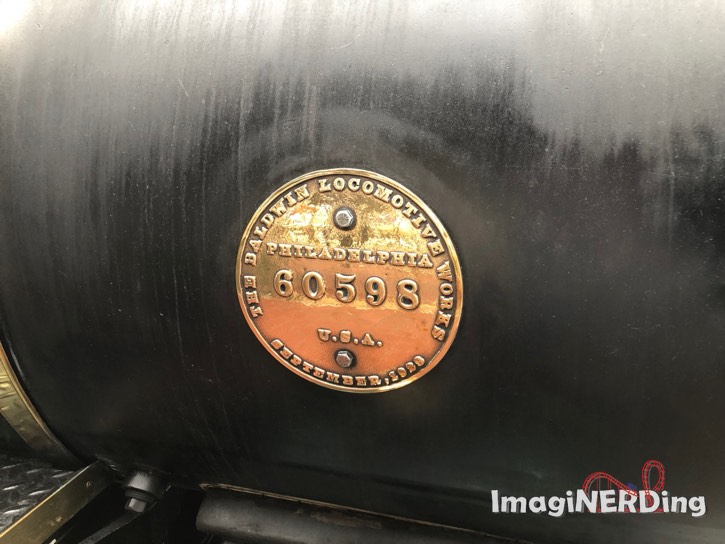 When first constructed, the engines ran on coal or wood, but were eventually converted by the Mexican company to burn oil. Now, the boilers are heated by diesel fuel, which does not emit the sooty smoke that blackened the trains and, sometimes, the passengers.

Walt Disney World Railroad passengers ride aboard open-sided cars lined with benches for comfortable scenic touring. The shiny cars were completely fabricated in the same warehouse where the locomotives were rebuilt. 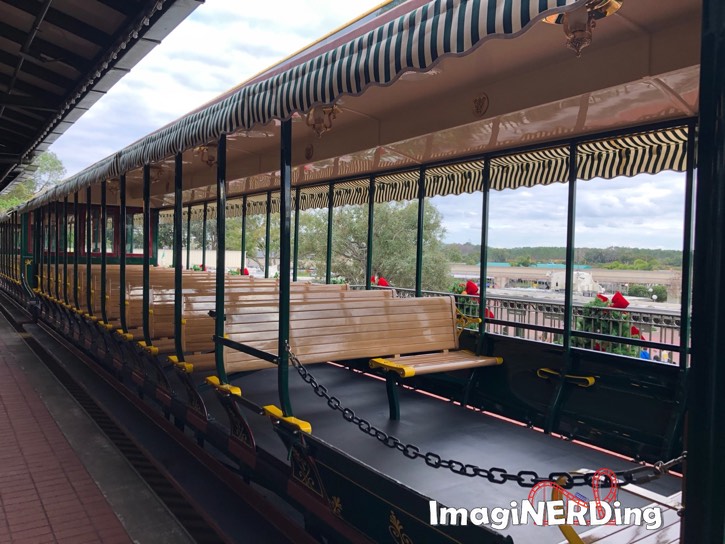 “Years ago,” said Bob, “the railroads had beautiful colors and polished brass, but the public began to think that they had to pay for all this. So, a big railroad owner had all his trains painted black to make the public stop complaining about the money they thought was going into maintenance.” 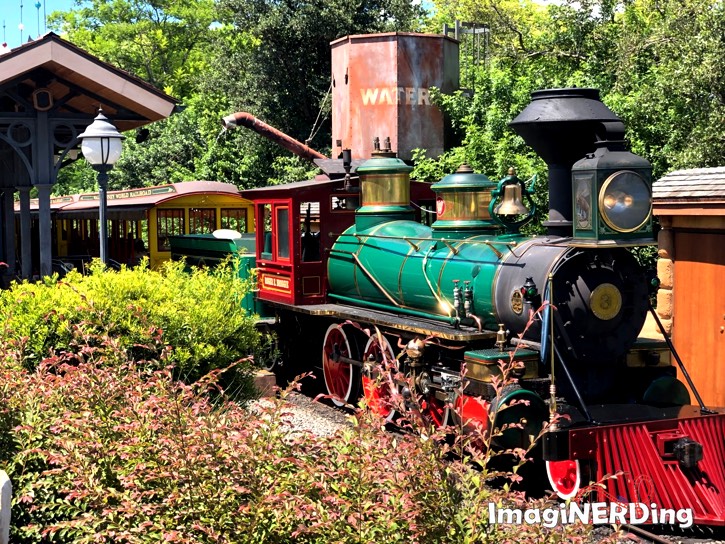 Disney’s trains are brightly painted, like those of earlier years. To help celebrate the nation’s bicentennial, they have been festooned with red, white and blue bunting and flags. Every day, the brasswork is polished, and the engines are completely steam cleaned once a week.

One of the alterations made on the vintage engines was to replace the headlights with a type more common in the heyday of the railroad. Real oil paintings of nature scenes decorate the box-shaped lamps which were installed. 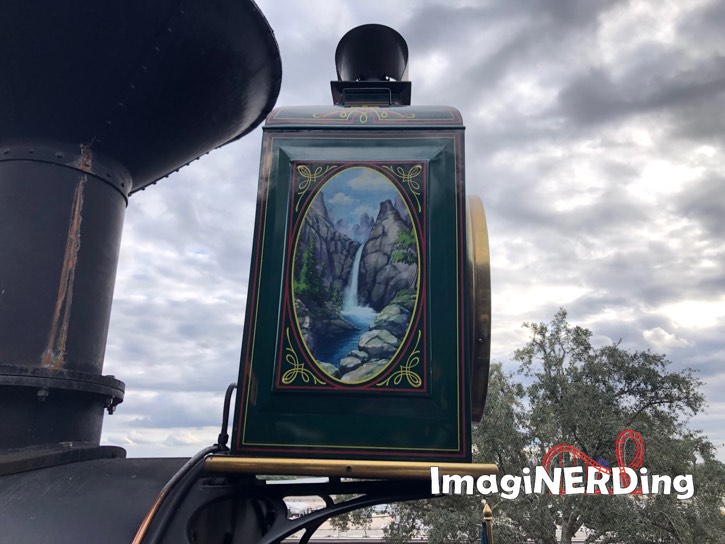 Behind the lamp on each engine sits the smoke stack, a bell, a sand dome and a steam collecting dome. The sand dome releases sand on the track when the brakes are applied or during rain to help prevent slippage on the slick steel.

“There is a certain romance and a lot of nostalgia associated with the steam trains,” said Bob. “At one time, every small boy in America wanted to be a steam locomotive engineer.” 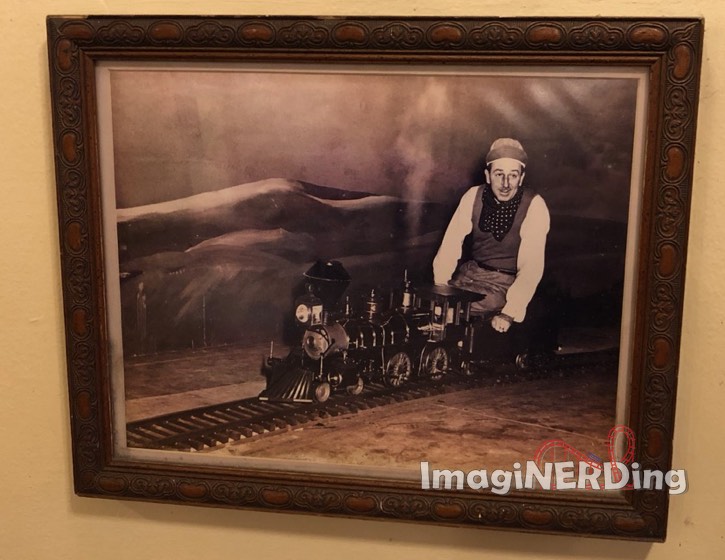 Railroadiana, a craze which befalls many rail fans, prompting them to collect and study anything to do with railroading, must have struck Walt Disney. Some readers may remember television films of Walt riding on the tender box of his 1 1/2-inch-scale train, which ran along a track in his backyard. It was named after his wife, Lilly Belle. Now, a larger namesake chugs along the tracks of the Walt Disney World Railroad. The Magic Kingdom’s “Lilly Belle” is a Mogul engine, meaning it has two small front wheels and six drive wheels. 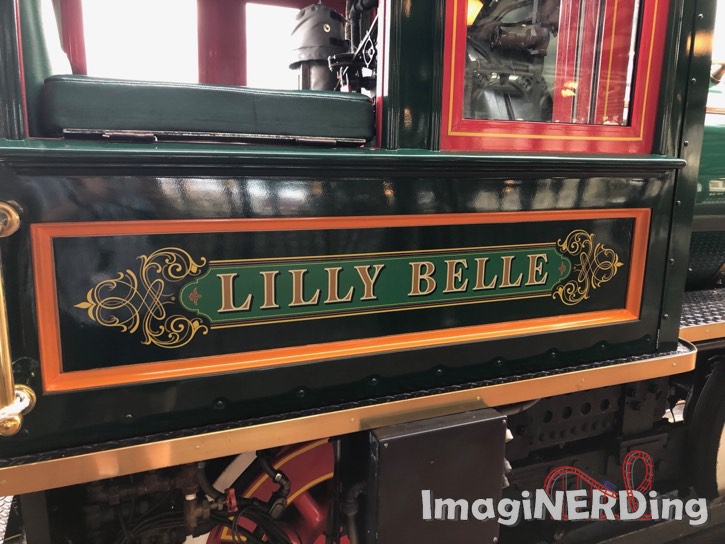 The “Walter E. Disney” and the “Roger E. Broggie” (named for the man who worked with Disney on the engines and railroad systems of both Parks) are 10-wheelers, having four small forward wheels and six drive wheels.

The “Roy O. Disney” was named for Walt’s brother, who was a lifelong partner in Walt Disney Productions. Before his death, Roy served as President, and later Chairman of the Board of the company. The engine is an American Standard eight-wheeler, with four small wheels in front and four drive wheels.

A blast on the whistle signals that one of the trains is leaving the Main Street Railroad Station bound for Frontierland Station and points beyond.

Building up 150 pounds of steam pressure on its 1 1/2-mile journey, the locomotive operates at speeds of 10-12 miles per hour. The train must stop at the Frontierland water tank as many as five times a day to fill up the tender to its 1,500-gallon capacity.

Clanging the same bells that for half a century an- nounced their arrival at the Mexican stations, the Walt Disney World Railroad steam locomotives continually roll into the Main Street depot. For them, time has brought the glory of a returned youthfulness.

Check out my history of the Walt Disney World Railroad.

Check out my review of Walt Disney’s Railroad Story by Michael Broggie.