In Service of the Red Cross: Walt Disney’s Early Adventures by David Lesjack

What could be so fascinating about Walt’s time in France serving in the Red Cross?

I started reading about Walt Disney and the Disney Company more than 25 years ago. I never imagined that a book covering two years of Walt’s life would be so intriguing. 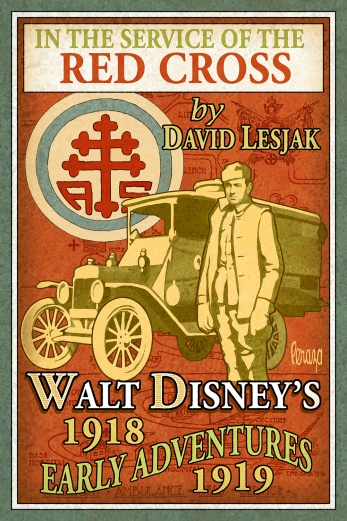 David Lesjack is a renowned Disney historian who focuses on the early years of Walt’s life, with a specific interest in the World War I and World War II years. Lesjack has written two other titles that look at the Disney Studios and their contribution to the war effort during World War II. In Service of the Red Cross is a 2015 release and was on my To Read list for a few years.

People talk about formative years, especially in someone who has been cultural touchstone; with a person as influential and revered as Walt Disney, you’re going to have researchers, biographers and critics looking for anything that will help shed light on Walt. Biographers always point to Walt’s time in Marceline and Kansas City with being the most influential periods of his life.

Lesjack is an intrepid researcher with a deep knowledge of Disney history. When you try to piece Walt’s life together to understand where his creative genius came from, you have to look at his whole life. With scant mention of what Walt Disney during World War I, you wonder how that experienced changed the young adult Walt Disney. As we all know, after the war, Walt pursued animation and filmmaking, where most of the biographies focus.

Lesjack takes us back in time to see Walt at three different periods of his life that define the man that helped define modern film and outdoor entertainment. We also get the rare treat of learning about Walt’s friendship with Alice Howell, an educator who ran a commissary during World War I. She was known as the Doughnut Queen and fostered a lifelong relationship with Walt. In Lesjack’s book, Alice plays the friend and fan of Walt Disney, as many of us wish we could have. We get to experience a time in Walt’s life, from Alice’s perspective, that shows Walt quickly become a revered name across the globe.

In Service of the Cross shares Walt’s desire to be part of something larger. We also learn about his need to make the world a better place. Lesjack sprinkles quotes from letters sent to and from Walt throughout the book. There are also several never-before-published photos that have been collected and curated by Paul Sears and Eric Queen.

Why Should I Read In Service of the Cross?

The book is more than just a glimpse into Walt’s life during the war. Lesjack shares information about the current events of the time and how they related to Walt. This gives the reader a deeper insight into the popular culture of the time. We also get a glimpse of Walt as a person and not a studio head. We follow along Walt’s journey to being a Red Cross driver in France and all of the other duties that enabled, including a court martial!

Lesjack leaves us with a decent look at Walt’s life during the World War I years that foreshadow his choices later in life. The insight provided tells us about Walt’s thoughts before, during and after the war. In a few cases, Walt shows a preternatural positivity that would last throughout his life, even against hardships and loss.

What Other Disney Biographies Should I Read?

My two favorite Walt biographies are The Animated Man by Michael Barrier and Walt Disney: An American Original by Bob Thomas. Both books are well-researched and provide a different look at Walt Disney.

You can also check out my bibliography of Walt biographies!