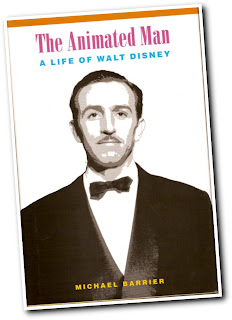 I just finished reading Michael Barrier’s biography The Animated Man: A Life of Walt Disney. In my opinion, this is one of the more important biographical treatises on Walt’s life.

Before we get into the review, I want to share a little about the author, Michael Barrier. Barrier has written several animation- and comic book-related titles. The most well-known are: Hollywood Cartoons: American Animation in Its Golden Age, Carl Barks and the Art of the Comic Book

and A Smithsonian Book of Comic-Book Comics. He also published Funnyworld, a magazine devoted to animation and comics. Funnyworld lived in the early 1970’s and you can find reprints of it on his website.

Barrier takes a different approach to looking at the life of Walt Disney. Instead of just focusing on the more mundane facts and figures, Barrier shows us the man through Disney’s work, artistry and relationships. Barrier does impart the sense that after creating Snow White, Disney was never quite happy with the films and was striving for another challenge. Even Disneyland, with the audio-animatronics, never quite compared to the challenges of Snow White.

The Animated Man is a thoroughly enjoyable read. I never felt like Barrier was reciting a litany of facts, but instead, he was telling the story of Walt Disney. Barrier is renowned for his research, but I never felt burdened by the text. In other words: I had trouble putting this book down. It is quite obvious that Barrier is an animation fan and has tremendous respect for Disney and the art that was created.

One of my favorite passages from the book concerns the Kansas City Public Library:

Disney was intrigued by animation’s possibilities and by what he called “the mechanics of the whole thing.” He was essentially self-taught as an animator; he wrote to an admirer many years later, “I gained my first information on animation from a book … which I procured from the Kansas City Public Library.” That book was Animated Cartoons: How They Are Made, Their Origin and Development by Edwin G. Lutz. According to its copyright page, Lutz’s book was published in New York in February 1920, the same month Disney joined Kansas City Film Ad, so he must have read it very soon after it was added to the library’s collection. He said of the book in 1956: “Now, it was not very profound; it was just something the guy had put together to make a buck. But, still, there are ideas in there.”
–p. 26, The Animated Man.

Knowing that Disney utilized a public library to help jump start his career would make any of us public librarians proud.

If you’ve spent any time checking out Disney-related books, then you may have heard about the scuffle between Barrier’s work and Neal Gabler’s Walt Disney: The Triumph of the American Imagination. See, at the beginning of Gabler’s research (1995 or so), he started out to write a simpler biography of Disney after receiving a Guggenheim fellowship. At some point, Gabler was given unprecedented access to the Walt Disney Archives and corporate authorization to write a definitive biography; Barrier was denied access while writing The Animated Man. The press has been enamored with the fact that Gabler was given full access to the Archives and they have heaped accolades on him. Barrier’s more authoritative research stems from the amount of work he had done while writing Hollywood Cartoons and Funnyworld and through the interviews with animation legends. Barrier knows his stuff. He does rely on a large amount of primary sources and his endnotes are well-documented and as intriguing as the rest of the text. I found myself taking much longer to read The Animated Man because I spent so much time flipping back to the notes to get more information. Since both were published within a year of each other, it is inevitable that comparisons will and have been drawn. I would have liked more comparisons between the works–from the critics–as Barrier’s book is more definitive while Gabler’s book comes off as a little snobbish and presents a seemingly misunderstood view of Disney.

I read Gabler’s book first and found it hard to continue at points. It read as tenuously as it was long. From the beginning, Barrier captured my attention and interest and framed a picture of Disney through the art produced and the company he founded and ran. Thematically, if you look at how the authors present their vision of Disney, they take decidedly different routes. Gabler paints a man obsessed with control who is never happy because of the lack of control and his attempts at escaping his father’s shadow. Gabler presumes to psychoanalyze Disney through memos, letters and notes–ultimately presenting a self-centered and egotistical slave-driver. Barrier takes us on a journey through the work of Disney to present a man who is less a control freak and more of an entrepreneur. Barrier wastes none of our time looking into Disney’s psyche and instead focuses on what is tangible with Disney in order to provide a glimpse into his life.

Bottom Line: This is the best biography of Walt Disney that I have had the pleasure of reading. Barrier does focus predominately on Disney’s opus of work–personal and corporate–but doesn’t that define Disney as we know him and why Disney is significant to us?

and the paperback (right)

.
The paperback is not scheduled to be published until late March.