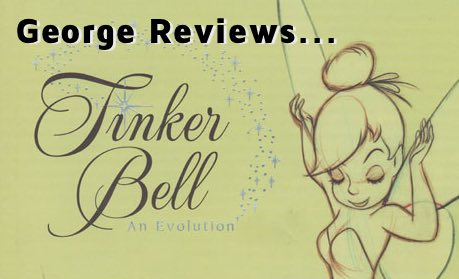 Tinker Bell: An Evolution by Mindy Johnson was originally published in October 2013. This review appeared on Communicore Weekly during the initial release of the book.

Tinker Bell is the latest animated star to get a book about herself. It seems as if Disney Editions is publishing one flagship title a year. Last year, it was the spectacular Poster Art of Disney Parks. When word came that Disney was releasing a book detailing the history of Tinker Bell, I had my fingers crossed for the best.

Last year, the Walt Disney Family Museum imprint released two incredibly detailed and incredibly enjoyable books about Snow White and the Seven Dwarfs written by JB Kaufman. Both titles set the bar incredibly high for animation-related books and I wondered if Disney would create something equally compelling with their look at Tinker Bell. Anyone doing research on any aspect of the Disney Company understands and has dealt with the difficulty of accessing material from the archives. It’s pretty much understood that if the Disney Company isn’t making money off of your publication, then you aren’t gaining access to the archives. 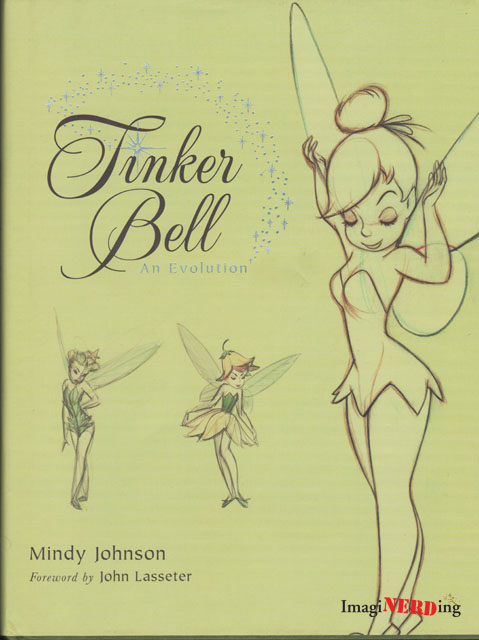 Tinker Bell: An Evolution is a deeply satisfying book about the iconic Disney pixie. It’s relatively easy to compare this book to JB Kaufman’s Fairest One of Them All since it features a similar progression in looking at Tinker Bell’s history pre-Disney, the development of the Peter Pan film that launched her and everything post Peter Pan. It’s a style that works very well, especially with a character that Disney did not create. 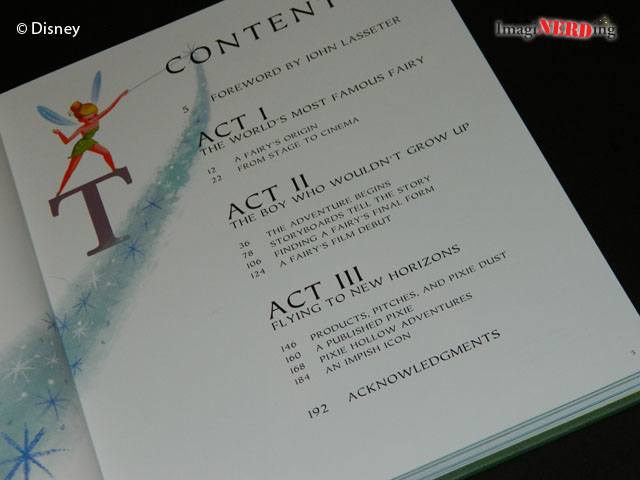 The book is comprised of three acts that follow Tinker Bell’s origin, Peter Pan and everything after the film, which does include the recent Pixie Hollow films. The meatiest chunk of the book (over 110 of the 192 pages) is dedicated to the Peter Pan animated film released in 1953. This does make the most sense since creation of the pixie within the confines of the film is most directly tied to the company. 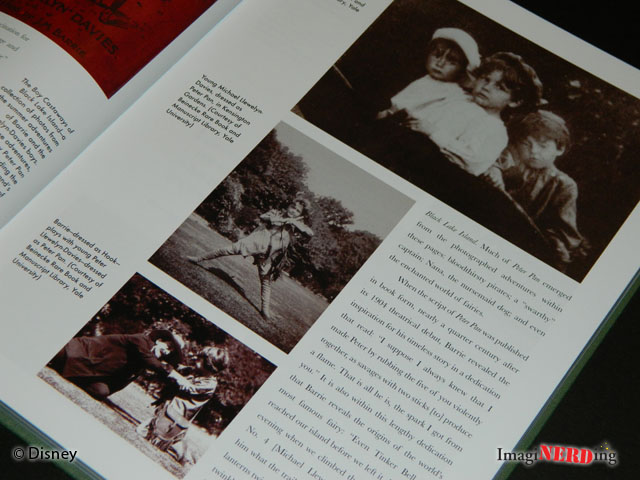 Act I – The World’s Most Famous Fairy is a wonderful look back at JM Barrie and the creation of Peter Pan. It’s not exhaustive, yet covers enough of Barrie’s life and work to create an understanding of why and how the author created the pixie. There were several eye-opening moments in the text and many photos from Barrie’s life that help propel the story. We learn how the Scottish Travelers and the young boys of the Llewelyn-Davies family influenced Barrie’s earliest works and the specific tales and characters in Peter Pan.

The development of the play is fascinating, especially seen in today’s light. Peter Pan was continually worked on and added to by Barrie during the first few years. As it gained tremendous popularity and made its way to larger stages and film, we follow the various stars and theaters where it was performed. The 1924 silent version by Paramount Pictures was lauded for the special effects (groundbreaking for the time) and directly influenced Walt Disney when making his animated version. 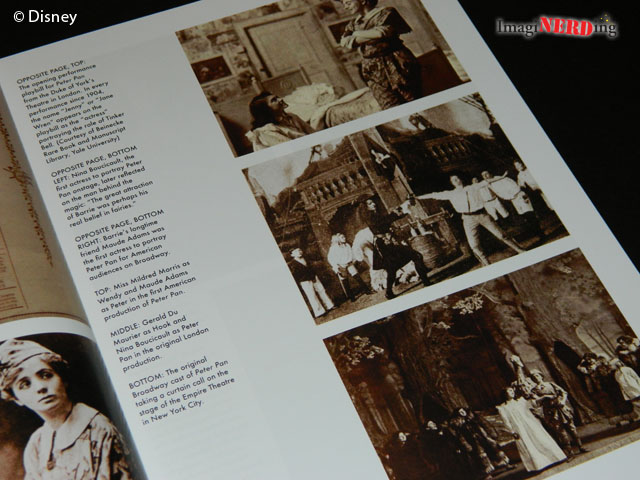 Act II – the Boy Who Wouldn’t Grow Up specifically focuses on the development of the Peter Pan film (over an almost 20 year period) and, of course, more specifically the creation and evolution of the Tinker Bell we know and love. Marc Davis, the legendary animator and Imagineer, is credited with her final look. He gladly steps in to share his influences, which include many of the animators that had a hand in Tinker Bell’s design, including Bianca Majolie, David Hall, Mary Blair and John “Jack” Miller. 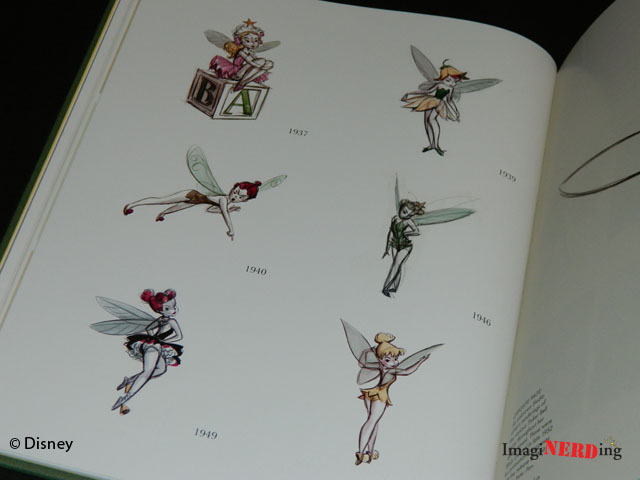 There’s even discussion about the many different starlets of the time that would serve as Tink’s live action reference.The concept artwork in this section is truly astounding with drawings, paintings and sketches that show every aspect of the pixie including different hairstyles and outfits that matched the times. I’d estimate that there are three to four (if not more) images per page. There are also interviews with Ginni Mack, Margaret Kerry and Kathryn Beaumant, who all influenced Tinker Bell in different ways. Most fans of the film and the pixie will enjoy this section. 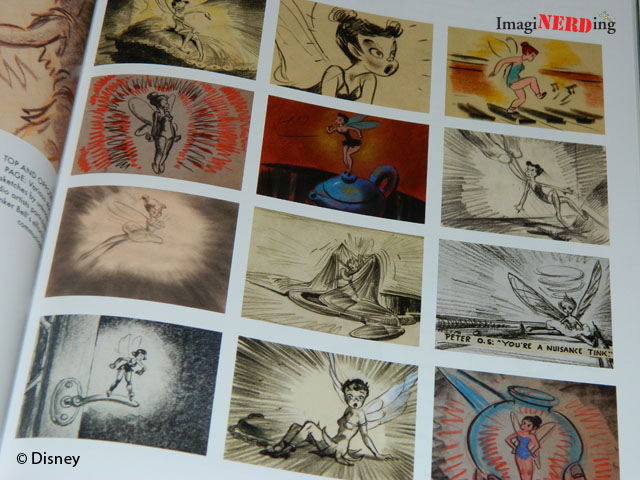 Act III – Flying to New Horizons covers everything after Peter Pan to the Pixie Hollow films. A large part of this section is dedicated to Tinker Bell at Disneyland through promotional material and in-park appearances. It’s almost mind-boggling to see on how many Disneyland items Tink showed up. We also see other products that Tink helped hawk (Peter Pan peanut butter) and her limited comic book appearances. 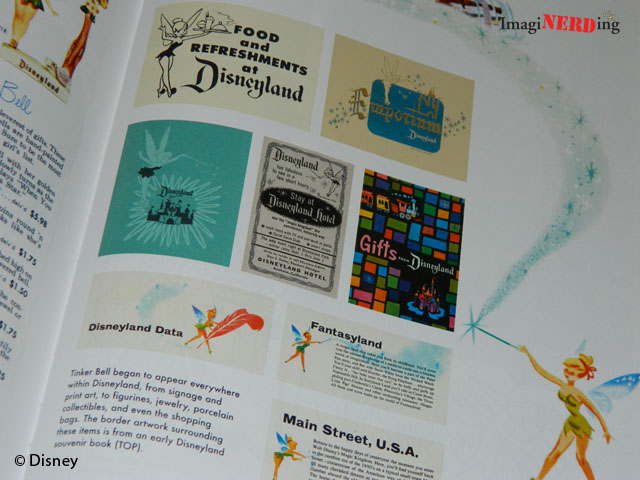 The last section, which thankfully is rather small, looks at the current state of the pixie. I won’t comment on the latest Pixie Hollow releases (mainly because I have no interest in them) but very few pages are dedicated to them. Granted, the concept artwork is beautiful but it seems like a cash grab to me; a way to keep Tinker Bell in the public eye and create another franchise as the Princesses.

On a side note, this is the second book this year from Disney Editions that has a very odd picture. The Roy E. Disney book is really good, but many of the photos are fuzzy or pixielated (see what I did there?). I ran across the photo below on page 186 of the Tinker Bell book and I couldn’t believe that Disney published it. 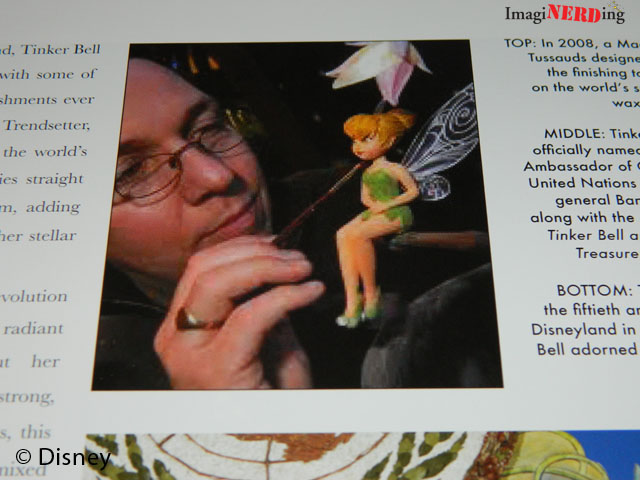 I only re-sized the photo like all of the other images on this page. It looks like Disney pulled this image from a website. How odd.

Overall, I loved this book. It’s a very detailed look at our favorite pixie and the cultural phenomenon that she is. I would love to see someone tackle Peter Pan (and many of the other animated features) in the same vein as JB Kaufman, but this is a great book for Tinker Belle fans or anyone with an interest in Disney animation history.

Are you going to pick up Tinker Bell: an Evolution?