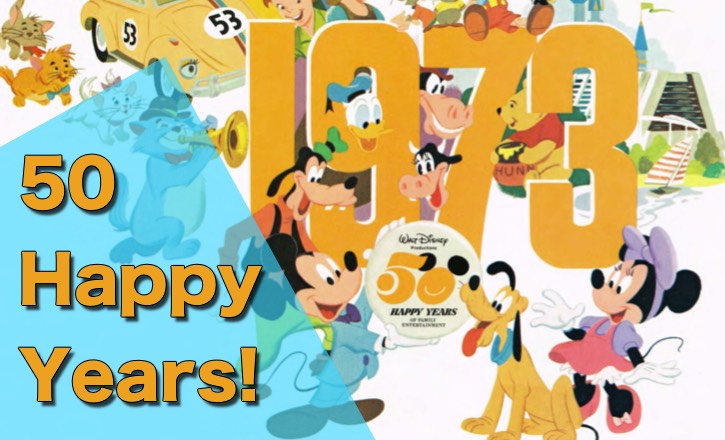 I’m always intrigued with how Disney represents and celebrates its own heritage. Anyone that lived through the 18-month long Millennium (1999-2000) and the 17-month long 100 Years of Magic (2001-2002) celebrations realized that Disney is no slouch when it comes to parties. Specifically parties that cause guests to return frequently (and stay in hotels). Before the two celebrations, the average Walt Disney World vacation lasted a week and most families visited once every 4-5 years. The Millennium Celebration changed that for most guests and created a culture of yearning to visit more often.

Back in 1973, Walt Disney Productions demurely celebrated the fiftieth anniversary of the company founded by Walt and Roy. One of the promotional pieces was the cover of the Disney News: Official Magazine for Magic Kingdom Club Families from the spring of 1973 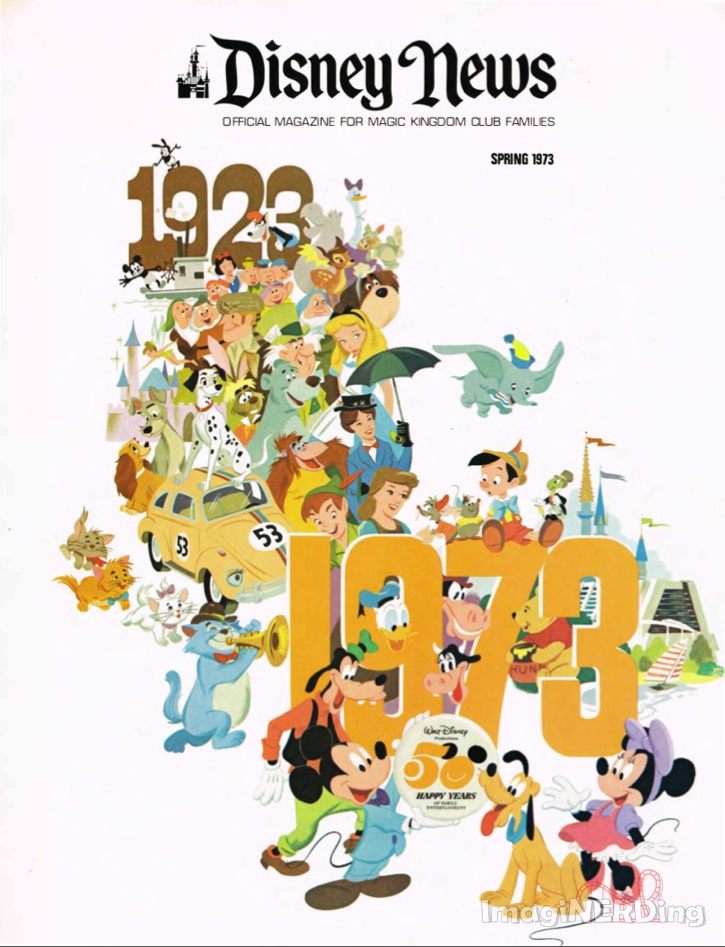 COVER STORY: This past January, Walt Disney Productions began a year-long celebration of its 50th An­niversary, a celebration which will be highlighted by exciting new motion pictures, special television programs, special entertainment events at Dis­neyland and Walt Disney World, and, on a somewhat smaller scale by com­parison, this special Anniversary issue of Disney News.

Beyond my fascination with the year-long celebration of the anniversary of the company, the cover artwork is astounding. Oswald the Lucky Rabbit is at the top of the image, which is an interesting choice for the company seeing as how they didn’t own the image or the character. From there, you see a litany of characters from the animated films, television and motion pictures. Tinker Bell and the Disneyland Castle appear close to the top (surrounded by dwarfs and dogs) and Herbie the Love Bug (one of the company’s most successful post-Walt productions) gets a lot of real estate.

To the right of the 1973 is Cinderella Castle and the iconic Contemporary Resort with a monorail beam and a striped sailboat. In 1973, the promotional message of Walt Disney World was still as The Vacation Kingdom of the World and they took every moment to promote the outdoor activities.

Most of the characters are represented stylistically as they appeared. Mickey and Minnie seem to be victims of (then) current fashion trends.

Still, it’s a fascinating image of what the company thought was important to celebrate from the past fifty years.

What do you think about the 50th Anniversary cover image?

Check out this video on the construction of Walt Disney World!