Seen, Un-Seen Disneyland: What You See at Disneyland But Never Really See by Russell Flores

George: With the proliferation and ease of publishing books, we’ve seen an influx of Disney-related titles, some good and some bad. Seen, Un-Seen Disneyland by Russell Flores is in it’s second edition and it’s a great read for people who are interested in seeing and learning about all of those little details that make up Disneyland. The book is in full-color with every photo taken by the author. And we’re talking hundreds of photos!

Jeff: ALL OF THE PHOTOS! Russell is a photo taking machine. So much so that, when I saw him this weekend at Disneyana, he was gearing up to take a thousand more photos for volume 2 of this series. But that’s getting too far ahead of ourselves now. We’re talking about the first volume. And it’s great. It’s a neat little guide that takes you on a tour of Disneyland, pointing out details that have always been there, but may have never noticed before. 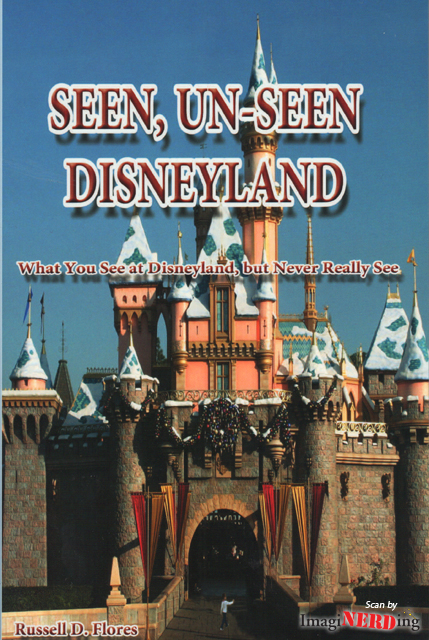 George: Russell adds a lot to the literature of Disneyland with this title, simply by the photos alone. But he also intersperses history; whether it’s the history of the area or a snippet or two from an interview, it adds to the total package. So far, my biggest complaint would be that I’d like some of the pictures to be bigger so I could see more of the detail. Even if Russell doesn’t update the title, he’s still created a fantastic snapshot of Disneyland from our modern time.

Jeff: Russell knows his stuff. And, he does something that most people don’t: he cites his sources! That way, he invites us to investigate things further, in case we are curious to know more. I agree about the photos, but that’s just a limitation of the printing of the book itself. I completely understand how larger pages would have driven the cost of the book up, so I don’t mind the photos the size that they are now.

George: It’s obvious that Russell did his homework while researching the book. The index is pretty impressive and he backs up all of the information in the book. The title is divided by themes instead of land-by-land. Russell covers garbage cans, building details and restroom signs! Seriously, it’s like Russell is our Communicore Weekly twin!

Jeff: HE KNOWS US TOO WELL! But seriously, if you want a quick, interesting read to bring into the Park with you, then seriously consider picking up Seen, Un-Seen Disneyland. Just don’t let that crazy hill billy sign it for you. He’s always pretending to be Russell.

Have you read Seen, Un-Seen Disneyland by Russell Flores? What do you think about the book?

One thought on “Seen, Un-Seen Disneyland by Russell Flores, a Book Review”