Jeff: Honestly, the answer to that is no. You won’t learn any secrets about the film, since it takes place during the 1939/1940 New York World’s Fair AND the World’s First Science Fiction Convention. That said, it WILL deepen your appreciation for the Plus Ultra Society and the work they do…which plays into the upcoming film. But, back to the book itself, I didn’t think I could be any more excited for Tomorrowland, but this book proved me wrong. It was fantastic. 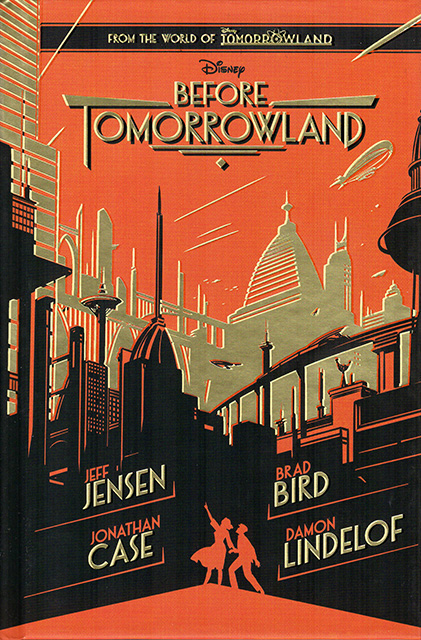 George: The book did take a few chapters to get started, but once the story felt firmly in place, the action and intrigue started. The Plus Ultra group is made up of very forward thinkers who want to make the world a better place. People like Nikolai Tesla, Howard Hughes, and Amelia Earhart make up part of the secret society. There are several plot lines that deftly interweave and the cast of characters fits the story very well. As stated in the beginning of the book, every character mentioned is real.

Jeff: Well, real historical figures. The two lead characters are inventions by author Jeff Jensen, but are so three dimensional, you’ll swear they WERE real people. As a matter of fact, the mother is suffering from terminal cancer…which, unfortunately, Jeff’s wife died of not too long ago. He channeled some of his knowledge and pain dealing with it into the book, which really made the characters seem like real people. Not many writers can do that, but it was amazing to see. Speaking of Jensen, I’ve been a fan of his since his days covering LOST for Entertainment Weekly. His love for complicated plots and intrigue made him the perfect choice to write this book.

Jeff: Seriously, he was JUST as into LOST as I was. Heck, he even helped me promote my LOST fan film, so I’m naturally inclined to like the guy. All biased aside though, he IS a great writer.

George: The book was put together very well. It reminded me a lot of the early science fiction from the 1930s and 1940s that was serialized. Each chapter has a title and subheading that gives you a bit of insight into the chapter. There are also some black and white illustrations scattered throughout the book done by Jonathan Case. They look like simple pen and ink, but really add a lot to the story.

Jeff: Again, we can’t stress enough that you won’t learn any new tidbits about the upcoming film in this book, but it DOES lay the groundwork for the amazing world we’ll soon be seeing on screen. The Plus Ultra folks were using the 1939/40 World’s Fair to reveal their work to the world…which, I think, may tie into the 64/65 World’s Fair aspect of the new film. But to have so many great historical minds working together in one place (and yes, we are aware that Earhart died before the time of this book), it’s amazing to see them interact to work toward a better world…and bicker because of it.

George: Maybe? Anyway, that’s two Faustian thumbs up from your friends at Plus Ultra, Jeff and George!

Have you read Before Tomorrowland? What did you think about the book and the movie, together?

One thought on “Before Tomorrowland Review”