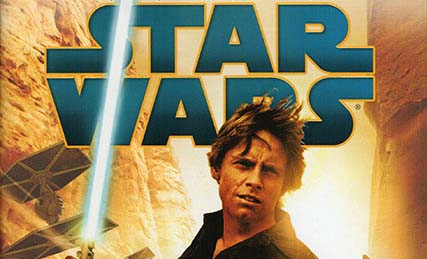 Star Wars Heir to the Jedi by Kevin Hearne

George: We were both sent Advanced Reader’s Copies of Heir to the Jedi by Kevin Hearne. It showed up just as we were both finishing Tarkin and I wasn’t sure what to expect. Tarkin was such a great read and I really hoped that Heir to the Jedi could stand up to it. I’d hate to see the the “new” series tank after a few good titles.

Jeff: To be fair, this title was written BEFORE they announced that the Expanded Universe was going on. With a few slight adjustments, Hearne managed to make it fit into the new Disney-owned canon, and become part of the lore. Like George said, we had just finished Tarkin when they showed up, so the entire time I WAS measuring it them against each other.

George: So, Heir to the Jedi is interesting for several points: it’s written in the first-person and it takes place shortly after the Battle of Yavin. Luke Skywalker is the main character, so we read the book from his point of view. At first, the first person perspective was weird for a Star Wars novel, but it did make for a really good read, as far as the story progression. Also, taking place a short while after A New Hope was an area that we’d not seen much of before.

Jeff: It was interesting to me that a lot of the book focused on Luke’s Jedi training…or, rather, his lack thereof. Really, he had all of, what, 20 minutes with Ben before Vader struck him down? Luke may be a hero of the Alliance, but he literally has no idea about his powers or what he is doing. He knows nothing, and his uncertainty about his future as a Jedi is made known throughout the entire book.

Jeff: That’s true. I’ve always been unsure about my future as a Jedi. Mostly because Sith seems more my style, but still…

George: I would totally use the Force to convince the Cast Member that my Fastpass was valid. I guess that makes me a little Sithie? Wait. Nevermind.

Jeff: ANYWAY…the book follows Luke, along with R2-D2 and his new companion, Nakari, as they try to rescue an alien cryptographer from the clutches of the Empire. At first, the book is kind of slow moving, but it ramps up the action as time moves on. To me, it seemed more of a character piece, getting to know Luke’s mindset immediately after the Battle of Yavin, and settling into his role in the Alliance.

George: It was interesting that Hearne used math in a lot of the books, including some formulas tied into the chapter titles. The alien cryptographer spoke in a mathematical language and it added some twists to the typical Star Wars story. As Jeff mentioned, we see Luke as the hero of the Battle of Yavin and as one of the last remaining Jedi. People he meets seem to know what Jedi are, but it had been almost 20 years since the Empire had purged the Jedi. It’s a good juxtaposition for the story, especially with the number of action scenes and space battles.

Jeff: Overall, I did like it. It gave us some more Luke in his early years, just learning to use his new found skills, and trying to do good by the Rebellion. It wasn’t as strong as Tarkin, unfortunately, but it still filled in an interesting gap of time that we don’t know much about.

George: Also, it wasn’t too creepy that he liked Lea in this book.

Jeff: Well, I mean, this was BEFORE he (spoiler) knew that she was his sister. They DID share a brief kiss in Empire. That’s WAY creepier, dude.

George: So, we both really liked it and recommend it. It’s a strong title in the Star Wars canon and really gives us a great look at Luke’s next step.

What did you think about Heir to the Jedi?