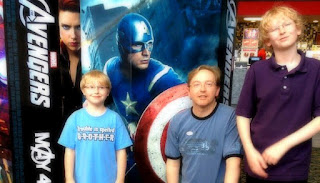 I took my sons to see the Avengers at an early showing Friday. We did sign them out a bit early, but with a film this highly anticipated, we wanted to make it a special occasion. And it was only an hour early, anyway.

Should I Take the Kids?

We love the Marvel superhero films that have been released over the past few years. Even though it is PG-13, I felt comfortable taking my youngest son to see this film based on Captain America and Thor. There is a question of violence in the film, but I felt like it wasn’t any worse than the evening fare on Cartoon Network. You have to judge the film for yourself, but also keep in mind that any child eight or above is going to be dying to see this movie. Especially if all of their friends are talking about it. Also, the films can give you some great conversations with your kids about superheros and their humanity.

This is a superhero film. And a modern film full of fantastic visual effects that bend and defy the laws of physics. But it is still very well done and never felt like a giant special effects mess. Most of the violence takes place between the superheroes and  the villains. There was not any discernible violence against real people in the sense that you don’t see any deaths on screen. Of course, the collateral damage is assumed when a giant skyscraper is toppled.

The mark of a good film, to me, is how much we talk about it and discuss the scenes on the ride home. We were all questioning the villains and what might happen in the next film. Who is the next villain? Will the Avengers re-assemble? Who is the real leader of the team? Did you see what the Hulk did?

Joss Whedon (Buffy the Vampire, Dr. Horrible’s Sing-Along Blog and Firefly) wrote and directed the picture.  Whedon is at the top of his game with this film. He is able to tie all of the converging story lines from all of the Marvel films into a cohesive and tight story. I was reminded of one critics review that stated that even the sections that were dialogue based were still fantastic to watch. And I agree.

The humor is top notch and well done. A friend of mine saw a preview of the film and told me that the Hulk would be a favorite character and he was right. My only issue with the film was that it was put together so tight that there wasn’t any breathing room for the jokes. If you laughed too long, you could miss the next line of dialogue.

As with any film about superheroes, the real meat is not in the fantastical effects, but in the humanity of the characters. The Avengers are a disparate group that come together and find themselves along the way. Whedon does an incredible job of interweaving their personal conflicts into the larger story. We also start to see more layers peeled from the character that could prove interesting for future films.

So, go see this film. You will enjoy it.

2 thoughts on “Mini-Review: The Avengers”