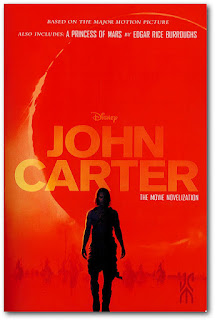 Disney Publishing sent me a review copy of the novelization of the film, John Carter. It happened to arrive at the same time that my Sci-Fi/Fantasy book club was reading the book that the film is based on, A Princess of Mars by Edgar Rice Burroughs.

The book contains the novelization by Stuart Moore and A Princess of Mars by Burroughs and it weighs in at a hefty 555 pages. The novelization is the first 205 pages and Burroughs’ original work clocks in at over 300 pages. As of this writing, I have not seen the film.

I read the novelization first and enjoyed it. After reading both, it was obvious where they made changes to suit a modern movie audience. The story arc remained fairly faithful to the original book with only some minor changes to suit the needs of film. It was interesting to see a modern-day author take on a novel that was released 100 years ago.

The original work was a fantastic piece of early science fiction. Being a public librarian and avid reader, I am always interested in trying out a new genre or author. Even though I love sci-fi, I tend to stick with more modern works. What I truly loved about A Princess of Mars was the obvious command of the language that Burroughs exhibits. I love it when an author makes me reach for a dictionary.

There were some confusing departures in the novelization that seemed to be a setup for future films. When I asked some of my book club members that had read the Barsoom books, previously, they didn’t remember  any mention of the mysterious Therns.

Both reads were fairly enjoyable and actually made me more interested in seeing the film. Since so many modern filmmakers point to A Princess of Mars as an influence on their works, it is worthwhile to grab a copy.