I can remember the day when my brother, Andrew, came back from an incredible vacation and he wanted to do something to celebrate and share the magic of Walt Disney World. A week later, we started a blog and called ourselves the Disney Geeks. We adopted the ImagiNERDing moniker after a long weekend of carousing and a secret Disney trivia dance contest.

So first, a shout out to my little brother (I have to remind him of that all of the time) for pushing me and inspiring me all of these years. (How many trips did we trick our wives into letting us take to WDW?) Also, for being one of the amazing forces behind Communicore Weekly. We would not be half the show we are without you and Steve making the music.

At times, I am shocked at the number of friends I have made around the world (and the number of enemies). Some of my best friends have been the bloggers that have been doing this as long as me and continue to put out great content.

Thanks guys (and gal) for being an inspiration.
I have been involved with a lot of projects over the past five years that I am very proud of. I have been the honored guest on the WDW Radio Show, Those Darn Cats, and WEDWay Radio and podcasts.
I was asked to contribute an essay to Four Decades of Magic: Celebrating the First Forty Years of Disney World. It is more than you ever want to know about Discovery Island.

For Valentine’s Day, 2012, I wrote a piece about Walt and Lilly for the Walt Disney Family Museum (Thanks, Jeff Kurtti).

2012 has been a banner year and a culmination of everything I have been doing at ImagiNERDing.com.

In addition to my brother, my co-host for the weekly video series, Communicore Weekly, has been a tremendous influence, motivator and partner. Jeff Heimbuch and I became fast friends in the beginning of 2011 and we knew we wanted to work on some projects together. Jeff was tapped by Mice Chat to write for them in late 2011. Shortly after that, he came to me with the idea of working on a weekly video series and everything fell into place. We recruited my brother and his writing partner, Steve Williard, to create an amazing theme song and bumpers for the show. Steve and Andrew even got me to rap.

Each week we cover our favorite Five Legged Goats, Disney books, Fuzzy Photos and more! We have been called the Troy and Abed of the Disney community and I wonder when we going to decide which of us is really is Inspector Spacetime and who is Reggie. I will have to ask Future Jeff when I see him.

Thanks, Jeff. I know that Rolly’s book is going to be phenomenal.

I’ve picked up a major writing gig this year.

One of the most amazing opportunities was when I was asked to write a weekly column for Mice Chat. Being given the chance to write for one of the most visited Disney-related sites on the internet was, well, quite an honor and quite a shock. I have posted 11 columns so far and look forward to many more. Getting to work with a Disney Legend was amazing, too.

Did you know that Jeff and I are doing a LIVE Communicore Weekly at Epcot?

Visit http://micechat.com/blogs/imaginerding/ to check out my columns. 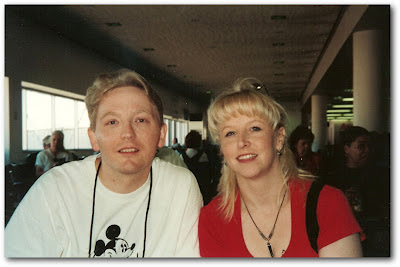 Of course, I have to thank my wife. She has been the true silent partner of ImagiNERDing. She has bought countless books and suffered many vacations to Walt Disney World and Disneyland so I could get pictures and document changes. And she lets me go to Walt Disney world several times a year in order to meet people, take more photos and do the ubiquitous research required. 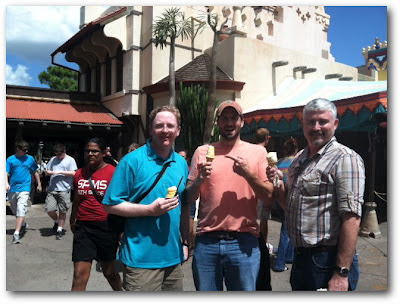 Obviously, though, the entire reason for starting ImagiNERDing was to enjoy a Citrus Swirl at the Sunshine Tree Terrace at the Magic Kingdom with some amazing friends. And then ride the Haunted Mansion.

I know I have forgotten a few people and I apologize. A lot can happen in five years.