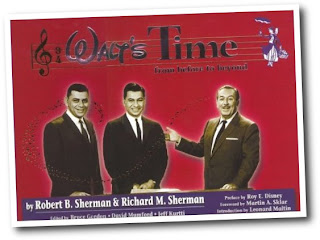 I originally posted this review in 2008. With the passing of Robert Sherman on Monday, March 5, 2012, I felt like it was appropriate to revisit this phenomenal title. It is out of print and, as can be expected, I assume that the price is going to increase over the next several days. It truly is a fantastic title.

The Sherman Brothers need little introduction to Disney fans. Prolific composers of music for films and theme park attractions, they have written some of the most memorable songs in Disney history, not to mention film history and theme park history in general..

This book, which looks at their long career, finally saw the light of day after the Sherman Brothers met Bruce Gordon and Dave Mumford. Just like The Nickel Tour, publishers felt that there was no commercial appeal in this book. Bruce and David had self-published The Nickel Tour and thought that they could do the same with Walt’s Time. The Sherman Brothers, after shopping the book around since 1981, had worked with Jeff Kurtti to write the majority of the text. Bruce and Dave met with Jeff and they agreed to self-publish. The Sherman Brothers were thrilled to work with Bruce, David and Jeff.

The book was created to resemble a scrapbook of their career. It starts with their first day on the Disney lot where they land the title song for the Parent Trap while auditioning a song for the Horsemasters. It then launches through the highlights of a majority of their works written and published at the Disney Studios. The middle section is dedicated to their father, Al and looks at everything that he published and his successes. During the section on their father, they look at their family history and how Al Sherman influenced his children. It is obvious from Walt’s Time that the Sherman Brothers were profoundly influenced by their father and Walt Disney. When the brothers speak of either man, the text is filled with love, gratitude and wonder. 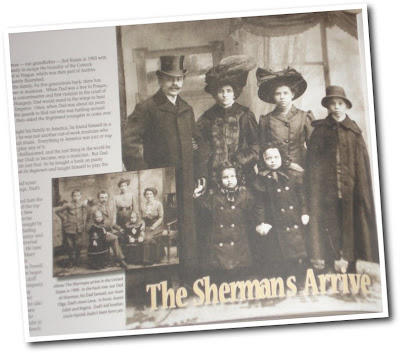 The third section details more of their work with the Disney Company, before and after Walt’s passing. It also looks at the body of work they have done since leaving the company. Stage productions, theatrical work and animated films make up the bulk of their work in the ’70’s, 80’s and 90’s.

The Brothers spend a lot of time discussing their interactions with Walt Disney and how Walt was an amazing and optimistic person. The song There’s a Great, Big Beautiful Tomorrow was inspired by Walt Disney. Their proudest moments include It’s a Small World and Mary Poppins. They wrote the songs for Chitty Chitty Bang Bang after receiving Walt’s blessings to work on the outside project. Albert Broccoli (producer of the James Bond movies) also owned the rights to Fleming’s children’s novel about the car. Broccoli brought the idea to Walt, who declined saying he had too much on his plate and wanted more creative control. After the success of Mary Poppins, Broccoli gathered most of the creative team that had worked on Mary Poppins. The Brothers were also involved with two of the biggest animated films of the 60’s as well: The Jungle Book and Winnie the Pooh and the Honey Tree. 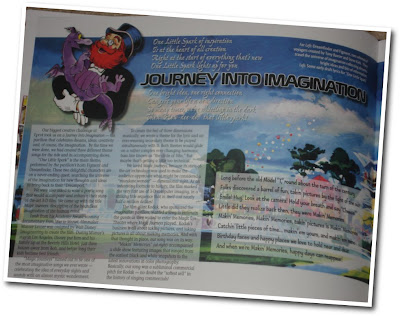 Obviously, the Sherman Brothers’ influence has been felt greatly in the theme parks. The Tiki Tiki Tiki Room, Magic Highways, Magic Journeys, Makin’ Memories, Astuter Computer Review, the Best Time of Your Life and Miracles From Molecules are songs that have resonated with fans for years and will continue to inspire us and make us sing.

I had the opportunity to see Richard Sherman perform at the D23 Destination D: Walt Disney World 40th Anniversary Celebration. It was an absolutely enchanting and heartwarming moment.

There’s not much one can say about seeing Richard Sherman perform the songs that he wrote with his brother. He played more than 15 songs and each one brought back a specific memory from a film, theme park or time of my life (Now is the time, now is the best time!). Tim O’Day did a marvelous job acting as the emcee and he helped Richard tell the stories behind the songs. Probably the biggest surprise of the evening was when the original Dreamfinder, Ron Schneider, joined Richard Sherman to sing One Little Spark. The whole crowd rose to their feet and sang along.

Looking at everything the Sherman Brothers have done is a tad bit overwhelming!

Bottom Line: I enjoyed this book and was completely astounded by how prolific the Sherman Brothers actually are. The book is designed beautifully and features awards, personal recollections and photos from every period of their career (just like a scrapbook!). This is book is clearly for music fans, fans of the Sherman Brothers and fans of Disney films from the 1960’s.