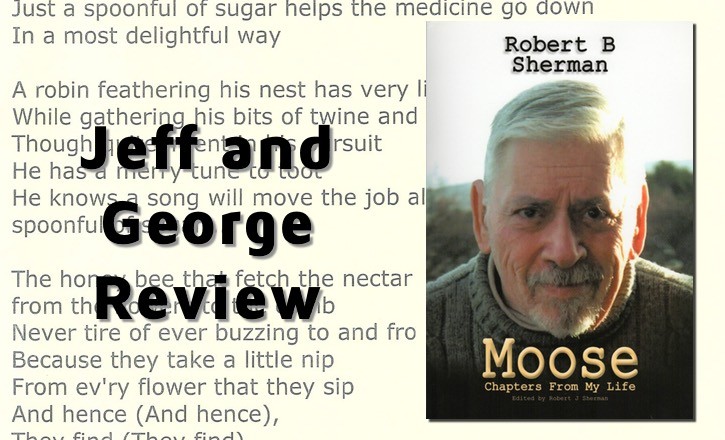 George: When we received review copies of Moose: Chapters From My Life by Robert B Sherman (and edited by Robert J Sherman), we were both extremely excited. Robert Sherman was one-half of the amazing songwriting team that penned some of the most spectacular songs for Disney films and attractions. Mary Poppins, the Tiki Room and it’s a small world are their three most well known projects. I will say, right off the bat, that it’s an incredibly enjoyable read. Robert mentions in the beginning of the book that a lot of the content covered in the amazing Walt’s Time won’t be rehashed. This doesn’t mean that Robert’s time at Disney is ignored, but it’s just not covered in depth. Frankly, the book is so well-written that you won’t miss the fact that Disney isn’t center stage.

Jeff: I have to say right off the bat that I was incredibly surprised at how well written the book was. We know Robert Sherman as one half of the prolific song writing team, but this book proves that he was also a fantastic writer as well. He certainly had a passion for it, and it shows through his tales. And that’s basically what the book is: a collection of 30 or so stories that take place at various times through out his life, and all weave together into one narrative. And it is fantastic! 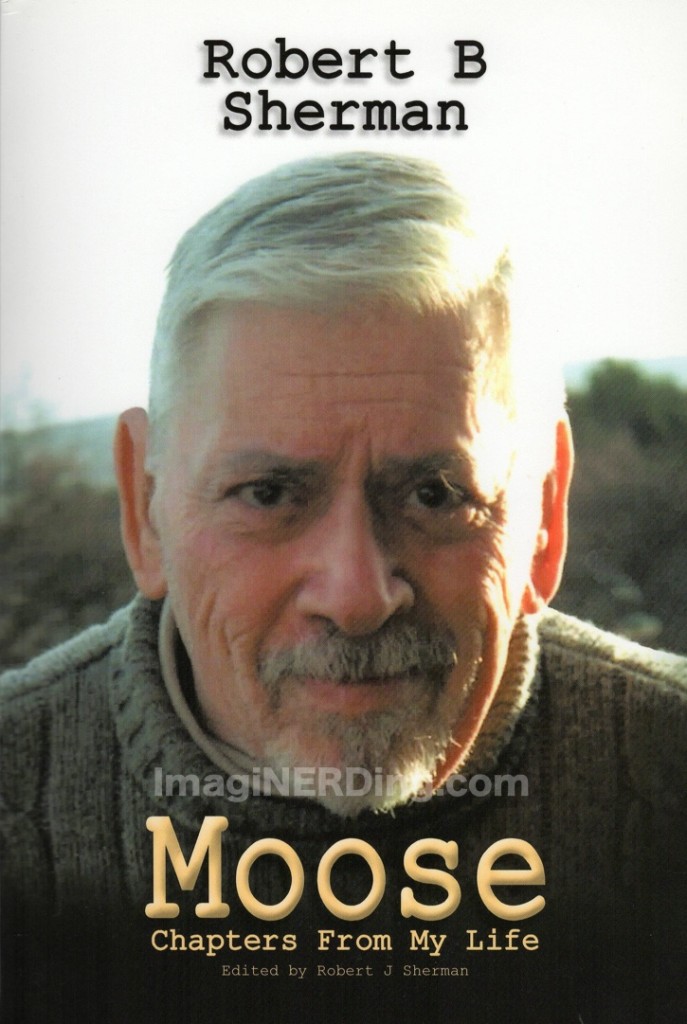 George: Agreed! Given the chance, Robert Sherman could have been a well-known author and a good painter! Thankfully, for us Disney fans, his father bet the brothers that they couldn’t write a pop song. The rest is history. As Jeff said, the book is really 30 or so stories that tell Robert’s life. He starts in the throes of World War II and zips around his life, seemingly willy-nilly, but it comes together and makes sense rather quickly. I have to admit I was in complete awe of the people that Robert met and of the places he’d visited. Recently, there’s been discussion from the Sherman children about the book and the portrayal of the Sherman Brothers, including the feud mentioned in the documentary The Boys.

Jeff: The book kind of sheds more light on that subject, among many other things. Which leads to me this point: I can’t believe how honest Robert Sherman is! He really shares some great stories, some of which had me very surprised how in-depth he went. I was impressed, and quite intrigued at his openness and honesty.

George: Despite any looming controversy, the book is a great read and it’s great to read Robert’s version of what happened. One thing I took away from the book is that even though Robert was not as outspoken as Richard, he did spend a lot of time building the Sherman brand and living an incredible life. A few of Robert’s stories talk about lost loves and heartbreak. He weaves the tales so deftly that you feel Robert’s pain and remorse. It’s truly a sign of a gifted storyteller.

Jeff: There is one thing I did take issue with, though, and that was the photo sections. They were obviously laid out for a differently sized book, and sometimes the text is so small that it is hard to read. It’s kind of a jumble, but it was great to see all the photos. Having said all that, it didn’t take away from my overall enjoyment of the book. This book is probably one of the best memoirs I have ever read, Disney-related or not.

George: Whether or not you’re a Disney fan (if not, why are you reading this?), it’s an incredible memoir that is a joy to read. Robert Sherman does look at a lot of darker times in his life and not only shares his thoughts but how he was able to move on. There’s a sweetness in these tales that shines through and we get a very personal glimpse about how Robert thought and what his dreams were. With Moose, The Boys and Walt’s Time, we have a great look at the Sherman brothers. I’d love to see Richard pen a memoir of sorts to allow him to tell his side of the story.