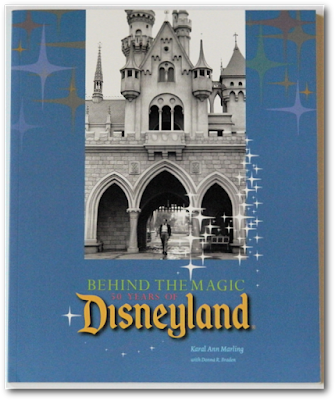 This book was released a a companion to the exhibit of the same neame that toured a few locations in 2005.

He began as a Midwestern cartoonist with big dreams. As a successful, young Hollywood filmmaker, he imagined a new type of entertainment — a family park — where he could create a world of pure, uncompromising fun and fantasy to share with his daughters. Fifty years after the realization of his vision, Disneyland, the name Walt Disney has become synonymous with trusted family entertainment.


Behind the Magic — 50 Years of Disneyland is the written companion of the exhibition (by the same name) created by The Henry Ford and Walt Disney imagineering. Written by Karal Ann Marling and Donna Braden, both of whom served as curators of the exhibit, this book is a behind the scenes walk-through of Disney’s original theme park — brick by brick — and subsequently details the birth of a new genre of family amusement, offering interesting, little known facts that will pique the curiosity of those who have donned mouse ears and those who have not.

Information from a press release about the exhibit:

Behind the Magic provides a rare look at American icon Walter Elias Disney and his vision for a new genre of family entertainment. Graphic designers, Disney aficionados, film historians, and generations of Disneyland visitors will find plenty of living history to explore. An audio tour is included with admission.


The three-part exhibition features Disney’s early life as a cartoonist and filmmaker; renderings and plans for his fantastic amusement park; and a section on the Imagineers, the gifted team responsible for creating and maintaining Disneyland’s culture and magic.


Behind the Magic displays Walt Disney Imagineering art and artifacts from Disneyland rarely seen outside the Disney Parks. The 7,500-square-foot exhibition includes 250 pieces of original Imagineering artwork, hand-crafted models, construction drawings, and promotional materials tracing the growth and history of the California landmark.