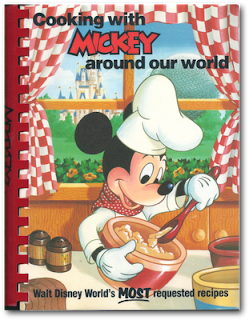 You never know what kind of oddities that you will find when you deal with Disney-related collectibles. Whether it is a guidebook that comes with a fantastic bag or a Tar Heel Bread button that leads you to an in-store giveaway that is believed to be the first use of a cartoon character to sell food. There is always something interesting that leads you down a path you never expected or turns over new information about one of our favorite theme parks.

Cooking with Mickey around Our World

was the first, official compilation of recipes from Walt Disney World. Published in 1986, it offers a great mix of recipes from restaurants all over the Vacation Kingdom of the World. Beverages, appetizers, soups. breads, salads, seafood, poultry, meats, vegetables, desserts and sauces make up the bulk of the offerings. As I mentioned in the review of Thought You’d Never Ask, Part Two, recipe books are a great way to trace the history of restaurants and food offerings at Walt Disney World.

In all, 57 different restaurants are covered through 292 pages. Did you know that they served Chili and Beans at two different places at Walt Disney World? You could find this delectable dish at the Campfire Snack Bar at Fort Wilderness and at the Fiesta Fun Center at the Contemporary Resort. Unfortunately, both locations are now gone. The Fiesta fun Center was renamed the Food and Fun Center and then demolished, so to speak, to create The Wave. The Campfire Snack Bar was converted into Crocket’s Tavern in 1986. Now, it mostly serves pizza and beer.

On its own merits, Cooking With Mickey Around Our World is a must-have resource for the Disney historian and foodie. The surprise waits at the end of the book under the section entitled Merchandise Mail Order. Remember the days before the Disney Store (where did they all go?) and before each ride ended in a homogenized gift shop? If you do, then you might remember having to call MOM, the Mail Order Merchandise Department. Back in the day, MOM was the only way to order Disney-related merchandise when not in the parks. Besides cookware, you could order almost anything from the parks through Mail Order Merchandising. 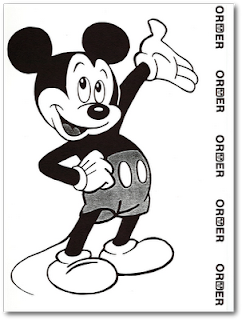 I love the design of this page. They use the Walt Disney World “D” in the word Order. And Mickey looks like he just had a haircut, er, earcut; the ears just don’t have the right ratio. But take a look at the two-page, full-color spread. Imagine decking out your kitchen with a few of these trinkets!


A very special thanks to Celeste Cronrath for designing the series of logos for our posts. Make sure to follow her on Twitter.