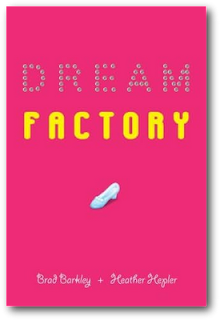 I am not a big fan of fiction that takes place at a Disney theme park. While I enjoyed the Kingdom Keepers series (you can read my reviews here), I was always dismayed at the liberties that Pearson took when describing the physical locations. I understand why he made those changes, but it bothered me enough that it tainted the books.

Dream Factory takes place during the summer of 2006 (if you do a little theme parkeology) at Walt Disney World during the Cinderellabration event. The book is told from the point-of-view of the lead characters in alternating chapters. One chapter is Ella’s experience and the next chapter is Luke’s.

Here is the blurb about the book:

When the character actors at Disney World go on strike, the teens hired as replacements learn that it isn’t exactly the Happiest Place on Earth. Ella gets to be Cinderella, simply because the shoe fits. It should be a dream come true, but Ella no longer believes in dreams. Luke is a fur character, Dale the chipmunk. Chip is played by his girlfriend, Cassie, who is perfect in every way. Why, then, does Luke find himself more drawn to imperfect things like the theme park’s Phantom? A team-building scavenger hunt brings Luke and Ella together. As they uncover the Magic Kingdom’s treasures, they discover an undeniable magic between them.

Right off the bat, you can tell that there are going to be discrepancies in the narrative. For one thing, a large group of teenagers is hired to be the characters and according to their stories, they received very little training. Also, the students are being housed in one of the hotels, on the monorail loop, that has been converted into a dorm. One of the more unnerving plot devices is that the teens are able to walk from their hotel to the Magic Kingdom after the park is closed. They have to avoid park security, so it is obvious that they are not supposed to be there.

Putting my stated qualms aside, it is a fairly benign young adult romance that follows a traditional, boy-meets-girl storyline; add a little under-age drinking and a complete disregard for the sanctity of the costumed characters and you round out the tale. This is definitely for the older YA crowd, mainly due to the nature of the characters relationships. It is a fairly safe read with only a few scenes of the teens making out.

I wanted there to be a deeper level to the book and the closest I could see was the growth that the characters experienced. The main characters, who felt alienated and out of place compared to the other teens, slowly realize that it is alright to feel different. They discover that they have their own feelings and the only way to grow is to try and be as happy as they want to be, as defined by themselves.

The ending was rushed and left you wondering what the next step was for Luke and Ella. This is a book to pick up if you like a Nichols Sparks-type romance that is softer and takes place at Walt Disney World. Otherwise, feel free to read most anything else.