We received a review copy of Cars 2: The Video Game for our XBOX 360 console.  My seven year-old is a rabid Cars fan and videogamer, so I handed the game over to him as soon as I unwrapped it.

This is his review. He dictated it, I typed it. 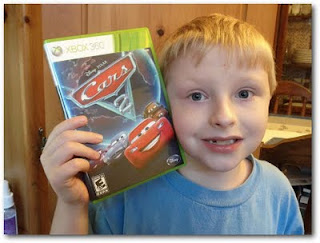 In Cars 2, you race opponents. If you get in first place, you get lots and lots of Spy Points. Spy Points are like EXP. EXP gives you level ups. The reason you need level ups is to get new cars. You want new cars because they look cooler and sometimes have more speed. You start getting gadgets in races. Gadgets are missiles, rockets, tri-rockets, car bombs, oil slicks, satellite bombs, plasma bolt and other cool stuff. To get first place, you have to gain energy by doing tricks and by getting the Alinnol.

I finished the C.H.R.O.M.E. missions but I am stuck on the Oil Rig Run series two in the SQUAD Series.

Agent Training Series are training and missions. The first mission is in London. It is training where you learn how to drive. Spy Missions are races!

All people who like the Cars movies are going to love this game.

My favorite character, of course, is Lightning McQueen. He is medium speed and medium power. Luigi is low power and lots of speed. He makes it easy to hit stuff. Here are two tips on the game: wherever it says “Do Not Enter” or there is a STOP signal, you should go because it is a short cut; Do not be Mater! He stinks. He is so slow. Another tip is to not let the “fix” cars with the arms ram into you (Ed. Note: Like Guido, the forklift car). They do a lot of damage or they pick you up.

I played a few races with him and found that the gameplay was pretty standard and was a cross between Mario Kart and Split Second. You had weapons that you used to “take out” the lemons but I found myself focusing more on the race, itself. My son really enjoyed the co-op racing when he could focus on the weapons side. It is a fun bonding game, but with every racing game, someone loses and someone wins. The violence of the game seems well suited for the younger set; you fire missiles but you never see them hit. The worst thing you do in the game is bump the lemons off of the road. Since my twelve  year-old showed no interest in the game, I would say this is aimed squarely at the six- to ten year-old market.