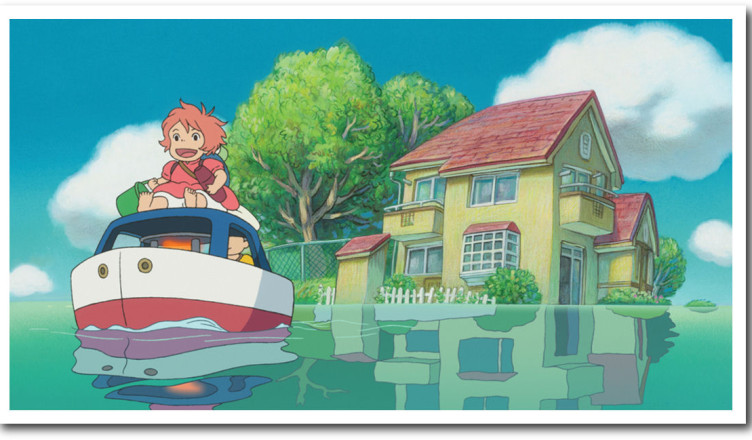 As we celebrate the Blu-ray release of Nausicaa of the Valley of the Wind, let’s take a look at another must-have Studio Ghibli film and one of my all-time favorites. The following review of Ponyo appeared on Imaginerding on March 1, 2010.

Hayao Miyazaki is one of my favorite modern filmmakers. Spirited Away, My Neighbor Totoro and Castle In the Sky are some of our family’s favorite films to watch. (How many of you are singing Totoro right now?)

Ponyo is the re-telling of Hans Christian Andersen’s The Little Mermaid. The main characters are voiced wonderfully buy Frankie Jonas (Sosuke) and Noah Cyrus (Ponyo). Sosuke discovers a beautiful goldfish trapped in a bottle and names her Ponyo. After getting a taste for human life (and ham), she decides to risk everything to be with Sosuke. This decision creates an imbalance in nature that must be corrected. Filling out the rest of the voice cast are Liam Neeson, Cate Blanchett and Tina Fey. All the actors portray strong characters and their voices lend themselves well to the world created by Miyazaki. And what a beautiful world it is.

Miyazaki departs from his traditional animation to create a lush and beautiful world that is realized through gorgeous watercolors. This movie was amazing on the big screen and shines on Blu-ray. Most of Miyazaki’s films share common threads and this one  is no different. There is a strong female character (more wild and primitive), a heroic boy without real superpowers, a cry from the environment and a reverence for family relations and elders. 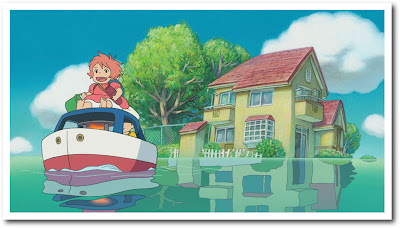 During discussions on the movie, I always come back to the fact that there is no villain in the entire film. At one point, you sense that a character could become a villain, but he is simply protecting his child. It is an amazing feat that a film has been created that works for everyone that watches it—without violence, entendre or slapstick comedy. The characters are believable and grow over the course of the film. The story is not sacrificed for a laugh–yet there will be plenty of smiles and laughter from the audience. Without resorting to contemporary spins to keep grownups interested.

Have you seen Ponyo?