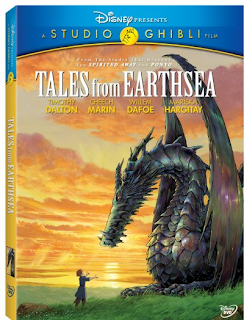 Disney has just released another Studio Ghibli production by first-time director Goro Miyazaki (Hayao’s son). Tales From Earthsea is based on a series of best-selling fantasy titles by Ursula K. Le Guin and inspired by Shuna’s Journey by Hayao Miyazaki.The film was released in Japan in 2006 but was not able to be released in the United States due to a conflict with a (lackluster) television adaptation released in 2004.

This film is rated PG-13 for violent images. The only other PG-13 Studio Ghibli film is Princess Mononoke, which is a stunning, gorgeous and violent look and man vs. nature. Unfortunately, Earthsea doesn’t hold a candle to the traditional Studio Ghibli fare. It is gorgeous and the animation is far better than anything being produced in America, but the story seems to lack in some places.

Disney has learned how to do wonderful voiceovers and the included cast (Timothy Dalton, Cheech Marin and Willem Dafoe) is superb. They have done an excellent job of matching the movements of the animated mouths with the dialogue.

Most major critics have panned the film and called it bland. They have also referred to Goro as uninspired and not his father. Still, we enjoyed the film, as a family, and were able to follow the plot fairly easily (sometimes, the Japanese Culture references can be difficult to understand). Several of the scenes were simply breathtaking and I was hard pressed to believe I was watching the film on a standard DVD.

One thought on “DVD Review: Tales from Earthsea”