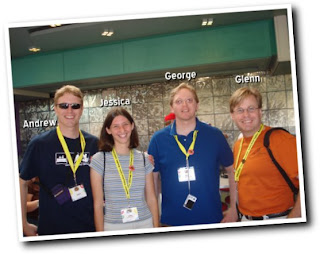 We met Glenn, from Passamaquoddy, at MouseFest 2007 right before Mike Scopa’s MouseFest 101 meeting. Lou introduced us and we were immediately thick as thieves. He refused, er, didn’t leave our side till we gave him a free meal at San Angel Inn at the Mexico Pavilion (almost 8 hours later!). Since then, Glenn has become a great friend and we are processing his application to become an unofficial Taylor/Nerdy Boy.

I first heard Glenn on the WDWRadio show right before MouseFest. He did a segment with Lou about the Yak & Yeti restaurant at the Animal Kingdom. After the segment, I high-tailed it over to Passamaquoddy and was amazed by what I found. It isn’t the typical Disney blog. Glenn has something truly original and quite humorous! If you want to hear more of Glenn, check him out as part of the MouseFest 2007 re-cap with Lou, Jessica, Jeff and Eric (besides, they talk about us quite a bit during that segment!).

As far as Passamaquoddy, Glenn is just someone who passed through the town once and took note… Doc Terminus serves the town with great medicines, elixirs and lotions all the way from Paris… France… Just don’t call him a snake-oil salesman…
We will have our Meet Our Neighbor with Doc Terminus tomorrow.

What is your earliest Disney memory? My first Disney memory is sitting in the family station wagon on the highway, waiting for the single file line of similar station wagons to make its way into the parking lot a couple miles away… Christmas 1971… I learned to appreciate the Disney queue at an early age…

What is your single favorite attraction? … A perfect example of a well-rounded attraction… Great STORY… Great QUEUE… Great THRILL… Great DARK RIDE… Great MUSIC… with a touch of NOSTALGIA referencing the early Disney film, SONG OF THE SOUTH…

What is your favorite Disney and non-Disney movie? Mary Poppins… Great Story… Great Performances… Great Music… and a touch of early Disney nostalgia with the mix of live action and animation… non-Disney Close Encounters of the 3rd Kind. Mostly cause I love the clothing and hairstyles.

What is your favorite park? At this point in my life, Epcot is the place… Broad welcoming layout guides me from some excellent attractions and even more promising food options.

Who is your favorite Disney character? Thumper…

What is your favorite Disney song? Candle on the Water (Pete’s Dragon)

If you could switch places with any historical or living Disney employee, who would it be and why? Peter Ellenshaw… Not only did he spend time with all the greats, he was left alone while working his matte painting magic… And was on location as well… Not only that, I’d be a heck of an artist…

What is you’re must eat food at WDW? Citrus Swirl

What is your favorite place to be at WDW? Section B, Row 1 of Soarin’

What is your favorite restaurant? Whispering Canyon

What is the first thing you want to do on your next trip? Eat at the Concourse Steakhouse before it closes.

What is your favorite fireworks show? Illuminations: Reflections of Earth

Where did you develop your love of Disney?Although I was always surrounded by Disney, it wasn’t until I was older and working in corporate that I fell for Disney. Although their decisions rankle some, I love watching the vibrant company grow and morph.

If you had to choose parks or movies, which would it be? Movies. You can get a dose of Disney while still living a semi-normal life.

Which character do you associate with the most? The Dad from Carousel of Progress… He’s high spirited. He likes to sit and talk… Every once and awhile breaks out in song… And likes all the latest gadgets.

Does any forensic evidence exist linking you to the Kennedy assassination? Indirectly. I have used paprika made from the grassy noll.

Would you make any major changes to the current design of any of the parks? Only by adding something more substantial to the left side of the Animal Kingdom so as to define the park shape. Right now it feels nebulous.

What is the most significant architectural feature of WDW? Spaceship Earth. While is the most regal, the Sphere is a more complex and amazing achievement.

What is the weakest Epcot country? If there were a war at Epcot, I think would be the first to surrender… They have very little to protect themselves except for a restaurant that hasn’t found its identity yet.

Where do you spend most of your time online when in the Disney-sphere? Passamaquoddy… It takes a lot of work.

You are the CEO and you have to cut one division: film, animation, parks, music, ABC, or ESPN. Where do you start cutting? Well, if I were CEO, I’d have to cut animation. It is surely the most expensive, least profitable division. But as CEO I can afford to be more idealistic… I’d get rid of ESPN. Although it is massively successful, it doesn’t share synergy with the other divisions.

Do you have any money we can borrow or have? I have 3 ruples. I can lend you 1.

What do you consider the most historically significant or defining moment in Disney history? December 21, 1937.. The premiere of Snow White… Walt’s folly could have shuttered the studio forever, making the idea of the theme parks irrelevant.

How do you feel about Disney’s stance to remove Song of the South and other period specific pieces from its association? I think it is a necessary evil. Disney is a big target for people with agendas… Its harder for those agendas to get traction if controversial pieces are avoided.

If you could change one thing about a Disney Movie, what movie would it be and what would you change? I’d redo the DANCE OF THE HOURS section of Fantasia… I have a gag reflex in attaching the dancing hippos to classic music.

Don’t forget to check tomorrow for the Meet Our Neighbor with Doc Terminus!

4 thoughts on “Daily Figment 162: Meet Our Neighbor Glenn from Passamaquoddy”