I can imagine Walt Disney’s A Visit to Disneyland

being one of the most well-read, cherished and worshipped books in any child’s collection in the late 1960’s and early 1970’s. 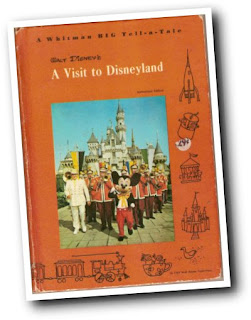 I envision late evenings under the covers with a flashlight; the book spread out below you. Lazy Saturday afternoons spent dreaming of visiting Disneyland while going over the pages again and again. Begging mom and dad to take you to see the sights outlined in the pages.

The text is presented in verse form and follows most of the main lands and attractions available in 1965. There are pictures from the park and illustrations by Stan Tusan (and have a very primitive Mary Blair feel). The illustrations show two young children enjoying the park. They are shown in the background visiting the same attractions as we read about them.

The copy I recently acquired even has artwork by one of the previous owners. The verso of the title page has a map of Disneyland drawn as if a child had created it with his or her crayons. My copy has some of the icons filled in: the Matterhorn is orange, Sleeping Beauty’s Castle is resplendent in purple and yellow, the foilage is green and the Rocket to the Moon is green and black. I can imagine the care and the excitement of the young artist as they added their own touch and feelings to the map. 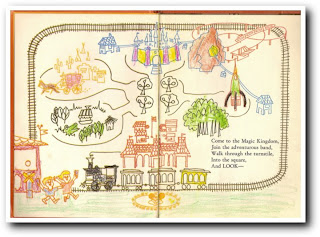 Do you have one moment that defines your first Disney Park experience? The one item that made you want to visit? The one that started your longing? 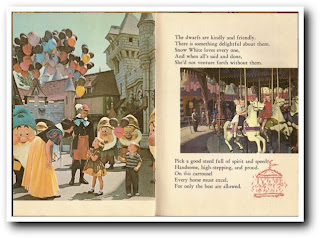 I can remember seeing a viewmaster of the Haunted Mansion when I was about 6 years old. I can remember seeing a shot of the front doors and another of the ballroom scene. From that moment forward, I was smitten and had the images seared into my mind. It would take almost 18 years for me to make my first trip and the Haunted Mansion would be my first Disney ride–ever. 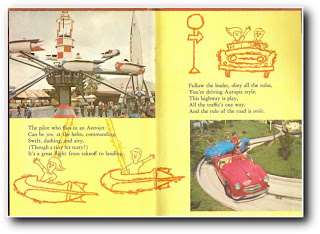 Was it worth the wait? You bet.

Leave adventure and magic behind you.
But please don’t shed one single tear.
The way Disneyland’s growing
There’s no way of knowing
What suprise you’ll find next time you’re here!

–endpaper,Walt Disney’s A Visit to Disneyland

6 thoughts on “Daily Figment 91 – Book Review: A Visit to Disneyland”