In a world where you can sail for hours and a round trip on the Monorail System is a 5 1/2-mile journey, attention to even the smallest detail has made Walt Disney World a never-ending series of visual pleasures. Just off bustling Main Street in the Magic Kingdom is a quiet courtyard and old-fashioned barber shop at the end of Center Street. Brown used brick, for the decorative serpentine wall bordering Liberty Square, was purchased from buildings being torn down in central Florida. The A-shape roofs of seven “longhouses” and the Great Ceremonial House at the Polynesian Village hotel, are formed of steel that weathers to a rich “rust” color–giving them an appropriate island “tin-roof” effect. “It is the hotels, shops, beaches and other recreational facilities at Walt Disney World,” wrote Time Magazine, “that really set the new complex apart .. ,” 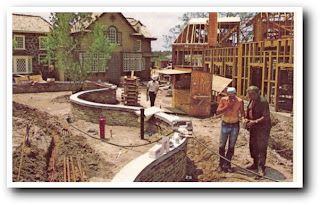 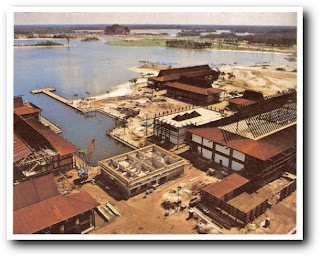 I love the Polynesian construction photos. It is such a contrast to what you see today. This shot even shows the property before the additional four longhouses were built. The change over time, is palpable.

Looking back at what the Disney Company has been able to do over the past 40 years in Florida is quite amazing. Moving dirt, creating canals and building a vacation kingdom–from Florida swamp land.

Images Copyright by The Disney Coproration
Don’t forget to stop by our site and leave some Disney Geek love!