“It’s going to be a world, a new, different kind of world,” Walt Disney told the Chicago Tribune. “There’s enough land here to hold all the ideas and plans we can possibly imagine.”

In the master plan developed in concert with the designers, architects and engineers of WED Enterprises, Walt Disney incor­porated the ideas and philosophies of a lifetime. Because of its size and scope, this Master Plan will take many years to complete. At its ultimate development, it is planned to include: 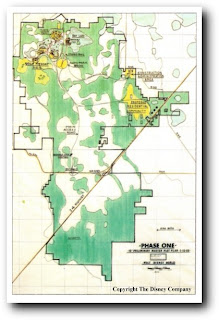 • a complete “vacationland,” encompassing theme resort hotels and camp site accommodations, and featuring a wide variety of land and water recreation facilities;
• within this Vacation Kingdom, a family theme park similar to Disneyland in California;
• an “airport of the future,” offering service to private and executive aircraft as well as commercial “commuter” service;
• an industrial park designed to showcase American industry at work;
• the community of Lake Buena Vista–planned to include Motor Inns, a commercial center, garden apartments and a “second home” community;
• a transportation system carrying guests from place to place linking the many attractions of Walt Disney World;
• and an Experimental Prototype Community of Tomorrow (EPCOT)-where Walt Disney envisioned a showplace for communicating and demonstrating imaginative new concepts for the future.

–p. 14, The Story of Walt Disney World – 1973 Commemorative Edition: A Behind the Scenes Visit to the Vacation Kingdom 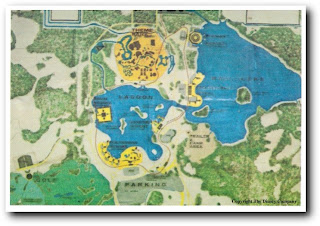 Looking at the Master Plan (their capitals, not mine), you can see an evolution of the design after Walt’s death. The first scan is a stylized reproduction that Walt and the Imagineers first created. Placing the elements, based on the bulleted text above, gives you and idea of the scope and magnitude of the project. The lower section (light green) is obviously the airport. The second section (darker green) is probably the industrial park. The third section doesn’t fit the clues that we are given. It doesn’t make sense to be the Lake Buena Vista community, but it could be. The fourth section resembles most of the models for Epcot that we have seen (but, then again, the second area resembles Epcot models, too). The fifth section (next to the light green flower) is the vacationland. And yes, it has been noted that the beige spot on the right does look like an embryo.

By the time the second scan was produced in 1968, a lot had changed. Walt had passed away almost two years earlier and the company was still reeling from the loss of their Chief Imagineer. Most of the Phase One plan was geared towards developing the massive canal system, creating the Magic Kingdom, building the first hotels and creating the service access. It is obvious, though, that the Imagineers and Disney Management decided to postpone thinking about Epcot. Even in Walt’s plans (and his infamous yearly films), he knew it would take a while to get Epcot started and going. So, they moved forward with creating the vacation kingdom.

The third scan is a close-up of the vacation kingdom area. The plans call for two resorts that were never built. The Asian Resort would have stood where the Grand Floridian is now and the Persian Hotel would have been built close to Tomorrowland with a monorail line going to it. In 1973, the oil crisis put a stop to a lot of travel and Disney felt the hit from the drop in the economy. The plans for the hotels were put on hold. The large square area of earth would stand vacant for more than fifteen years before the Grand Floridian was built. There was a third resort planned, the Venetian, for an area near the Ticket and Transportation Center. Unfortunately, the land would have required massive footings and many of the pilings actually sunk into the swampy land.

3 thoughts on “Daily Figment 92 – A Different Kind of World”