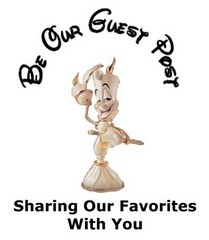 We would like to introduce you to a new feature at the Disney Geeks–the Be Our Guest Post series. We want to share some of our favorite authors, Internet celebrities and podcasters with you. The people we think you should be reading (and listening to) on a daily basis.

Our first post is from Honor Hunter over at Blue Sky Disney (BSD), which has become one of the best blogs for keeping up with Imagineering, Pixar (yay, Ratatouille!), Uncle John and general Disney good news. We await his Blue Sky Alerts with baited breath–I think we pester Honor a little too much about new Blue Sky Alerts, though (more, more, more!).

Honor has a great way of distilling, processing and presenting news about Glendale. His Suits vs Creatives posts offer a lot of insight that you will be hard pressed to find on any other Disney blog. Also, he clearly likes Ratatouille (the movie, of course–I didn’t ask if he liked the dish), so he must be very intelligent!

So, it is with deepest pride and greatest pleasure that we welcome you tonight. And now, we invite you to relax, let us pull up a chair, as the Disney Geeks proudly present… your guest post:

I was asked to write a post for George and Andrew months ago. I agreed to write it, but told George that due to other commitments I’d already made I would have to wait till later in the year. My apologies to the Brother’s Geek for my tardiness… fashionably late as usual, I say.

Being as this website is named DisneyGeeks I figured what better subject than to dissect what it is to be a Disney Geek. After-all, we know what a geek is. He’s the guy in high school that never got the girl. You know, the one the quarterback was dating. He was the guy with the pocket-protector and horn-rimmed glasses with tap on its bridge because he broke them trying to act macho and catch a football.
It didn’t work. He didn’t get the girl, but his mom bought him a swanky, new computer so that he could create Microsoft with it. Or something like that.

So what’s a Disney Geek, then?

Well, where a normal Geek can tell you what the Force is made up of…or why “Amazing Fantasy #15” is so valuable, a Disney Geek can tell you what the names in the windows on Main Street USA mean. Or where Walt’s apartment was… the countless places you can find a hidden Mickey or how to find hidden messages in the sky watching “The Lion King”. A typical Geek can point to the reasons he watches a particular movie from his DVD collection, while a Disney Geek can open up a tin, pop it in and stroll right to his favorite Donald Duck cartoon watching it with a kiddish glee.

And we’ve been living it ever-since.

In one of their earlier post here, the guys mentioned that to be a Disney Geek you have to read. Yup, it’s a good thing if you’re going to call yourself one of us then you had better grab a few books and get to know Disney lore… sure, any other Geek would be reading through his calculus book for that examine on Friday. But us, well we’re busy reading about the world Walt built or planned on building. We’re a feverishly loyal band of folk, but notoriously territorial…step into an argument with us over a Disney myth at your own peril. Some have lost digits, hands and even arms in battle with us over the most trivial things. I mean, we all know Disneyland is better than Walt Disney World, right?

Just kidding… put down that knife. I mean it… I was joking. All Disney theme parks have their own uniqueness… just ask Jay Rasulo. Wait a minute… scratch that idea.

Now where was I?

Oh, yes. We’re a special breed… the Disney Geeks. While at Comic-Con this year I saw many people dressed up as their favorite characters… I even saw Jack Sparrow and he was very popular with the ladies. I bet that Disney Geek was living a dream, eh? While there you notice every type of Geek. Comic-Con is the capital of all Geekdom, of course. While they were all sharing the dream… the few that were dressed in character as Disney characters… well, they were a little more friendly. Less worried about being at the Mattel booth to get their autographed Han Solo with kung-fu-grip action figure or what have you. Cause while others are waiting in line dreaming…looking to live in their own fantasy land.

Well, we’ve already been there. To Fantasyland, I mean. Walt made if for us over fifty years ago. So that we could chase the dream… so that we could live it. Being a Disney Geek isn’t for everyone, of course. It takes a special person… one with Mouse Ears most likely. If you want to join us, that’ll be twenty bucks… these ears aren’t cheap, you know. But all kidding aside, I tend to like being a Disney Geek. I mean, I’m a Geek like everyone else… I didn’t get the girl in high school… well, I mean I got a girl, just not THAT girl. I had to wait till I got contacts and grew my hair out in a more stylish way and then when I got the girl, she made me wear completely different clothes so that I looked way cooler. But, I’m still a Disney Geek… only now I’ve got to find my Mouse Ears.

I know they’re around here somewhere… in one of these drawers. No, that’s not it… nope… not there either. Well, chances are if you’re reading this column, on this website you already are a Disney Geek. If you’re new to it… welcome. And check the top of your head, see if there are a pair of Mouse Ears on them.

And enjoy. Welcome to the group… the club. An exclusive club…Now that’ll be twenty bucks.

What? You thought I was joking?