The Contemporary Resort is one of the iconic buildings of Walt Disney World. You could show most people a picture of it and they would be able to guess that it is “that A-frame Disney hotel”; “the one with the monorail“.

Okay, kids, let’s take a look at page 34 of our textbook for today: The Story of Walt Disney World (1973). The topic for today? The modularity of the Contemporary juxtaposed to the sanguine ruminations of the Polynesian.

The exciting innovations Walt Disney envisioned when he said Walt Disney World would be “a showcase to the world for the ingenuity and imagination of American free enterprise,” are nowhere better illustrated than in construction of the first two hotels. Here, steel-framed unitized or modular construction has been given its first major showcase.

All 1500 rooms of the Contemporary Resort-Hotel and Polynesian Village were fabricated by United States Steel at an assembly plant three miles from the hotels , trucked to the building site, and lifted into place by giant cranes (illustrated at the 14-story A-frame Tower Building of the Contemporary Resort-Hotel). Before leaving the on-the-job assembly plant, these light-weight steel rooms had been completely outfitted-walls covered, bath fixtures installed, mirrors in place and lights ready to be “plugged in.”

p. 34, The Story of Walt Disney World – 1973 Commemorative Edition: A Behind the Scenes Visit to the Vacation Kingdom 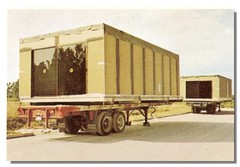 Moving the rooms from the US Steel site to the construction site. 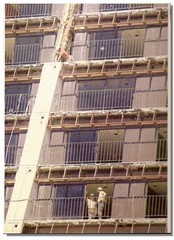 Working on the exterior of the Contemporary. 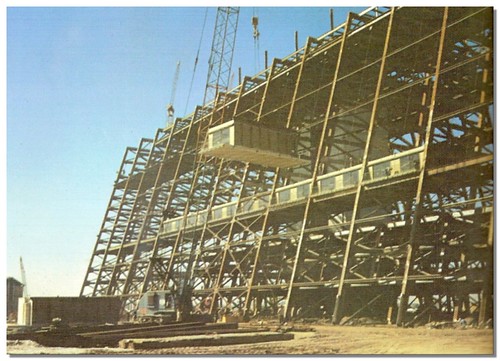 Rooms being lifted into place by crane at the Contemporary. 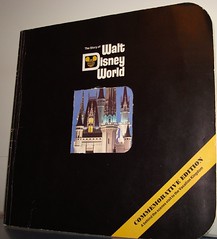 The cover of this amazing book. This is a very rare edition that even Scrooge McDuck would covet.