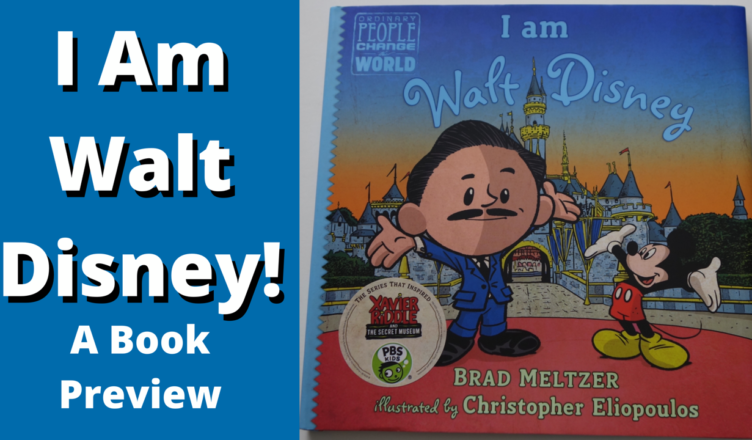 I Am Walt Disney by Brad Meltzer

“Who is that old man holding Mickey Mouse’s hand in front of the castle?”

How many times have you had to answer that question on family trips to Disneyland and the Magic Kingdom about the Partners Statue?

Are you looking for a way to introduce Walt Disney to a child in your life? Or better yet: your kids don’t believe that Walt Disney was a real person!

Have I got a book for you!

Check out my video preview of a new book called I Am Walt Disney by Brad Meltzer:

I received a review request for I Am Walt Disney, which is part of a larger I Am… series by Brad Meltzer. The book series consists of more than 30 titles about people that changed and shaped our world.

This Walt Disney children’s biography is full of extremely charming illustrations by Christopher Eliopoulos. Throughout the book, Walt is portrayed as a child-like adult, but with a larger-than-average-sized head, like a cartoon character. There were obvious tributes to Calvin and Hobbes throughout the illustrations, adding immeasurable playfulness to the book. Brad did a great job of condensing Walt’s life to the bare necessities and shares highlights that will lead young readers to want to learn more about Walt.

I Am Walt Disney is a great title for an elementary-aged child and a great book to read to younger children!

Check out the other books about Walt Disney: