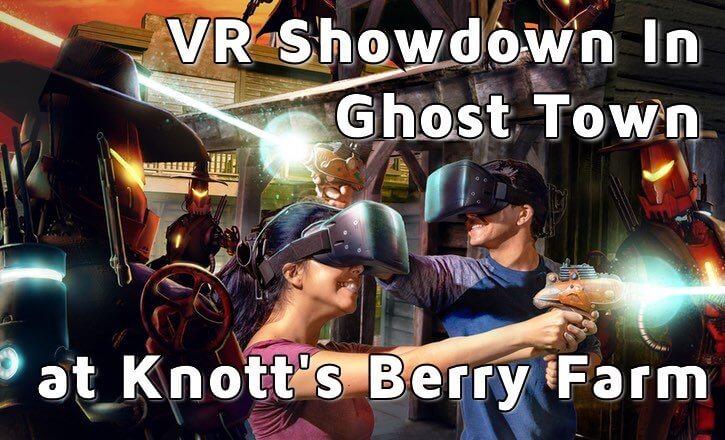 With the rash of VR Coasters, I think that this is a spectacular offering from Knott’s Berry Farm and Cedar Fair. I’ve experienced the Plants Vs. Zombies attraction at Carowinds and I enjoyed it, but there wasn’t a lot of re-playability. The VR Showdown seems pretty impressive. Let’s hope it works well.

BUENA PARK, Calif., March 8, 2017 /PRNewswire/ — Knott’s Berry Farm, its parent company Cedar Fair Entertainment and VRstudios announced today the details of the first permanent installation of a free-roaming, multi-player VR experience in a U.S. theme park, which will be located inside the Knott’s Berry Farm Boardwalk Arcade. A new custom and industry first virtual reality (VR) experience, “VR Showdown in Ghost Town” will make its debut in April, and is exclusively available at Knott’s Berry Farm.

The immersive and interactive VR attraction will invite guests to embark on a time travel adventure, which will transport them to a futuristic version of Knott’s western town of Calico. Players will be met by robotic creations and embark on a daring mission with other groups of players to defend the town.

The one-of-a-kind immersive experience perfectly combines virtual reality and a competitive gaming realm that will captivate guests. Armed with state-of-the-art wireless virtual reality headsets and futuristic blasters, multiple players will compete against one another for the highest score and bragging rights, as part of this immersive adventure, while striving toward shared team goals. At the end of the VR competition, guests will be able to view and compare scores with their fellow opponents.

“We are always looking for new and exciting ways to entertain our guests,” said Christian Dieckmann, Cedar Fair’s Vice President of Strategic Growth. “By using a free-roaming system, we can take full advantage of the capabilities of VR and let our guests be the stars of the show. A majority of people have not yet experienced VR, and we anticipate there will be a lot of interest from guests to have their first taste at our park.”

“VR Showdown in Ghost Town” is one of the many exciting new experiences coming to Knott’s in 2017 and will be available to guests at an introductory price of $6.00, in addition to park admission.

For further updates and park information please visit knotts.com or download the Knott’s Berry Farm app for your smartphone. Join the conversation about the new virtual reality experience using the hashtag #VRShowdownInGhostTown on the Knott’s Facebook or Twitter page.

Are you going to check out the VR Showdown in Ghost Town?