I could end the review here and just yell for everyone to go out and buy it. But, I’ll spend some time digging a little deeper into the book.

Seriously, guys, this book is worth it!

Maps of the Disney Parks: Charting 60 Years from California to Shanghai

The book is very hefty, and that’s the first thing that you notice. It feels solid and well-constructed. The front cover is surprising, since the book opens in a non-traditional and charming way (at first). The front cover is bisected and both sides open out. It reminded me of opening a map and really is a wonderful design choice, but not a good choice for a book. Once you start to leaf through the Maps of the Disney Parks book, you’ll realize that the cover makes it a bit awkward. The book does feel like it’s enclosed in a heavy slipcover. There is no book jacket which is probably good for future collectors.

The Maps of the Disney Parks Book: What’s on the Inside?

The content that was pretty amazing. It’s not what I would’ve done with the book but it’s pretty darn astounding nonetheless. Noting the table of contents, the book is broken down into six major sections that closely follow the operating decades and major developments.

The book is large and the publishers took great advantage of the physical size of the book when reproducing the maps. And, of course, that’s what people want to see. I’m sure most theme park fans have maps as treasured mementos. Long before we had the Internet, I can remember just staring at maps of Kings Island for hours trying to plan my next trip.

Many of the maps take up one entire page and a lot of the artwork actually covers two pages. Remember the Disneyland Fun Maps? You’ll find reproductions of many of them by Sam McKim and, most recently by, Nina Rae Vaughn. They also take a section of the map and blow it up on the following page to give you a better view of the art that went into the map.

There were quite a handful of maps that I’ve never seen before and they also offered a lot of preliminary drawings of the maps. It was interesting to see the  process of how they went from simple line drawings to fully-colored, published maps. I did love this aspect but I would’ve almost rather of had more maps or more close-up views of some of the other maps. I really appreciate the artistry that went into these but I would’ve rather of seen more maps overall. 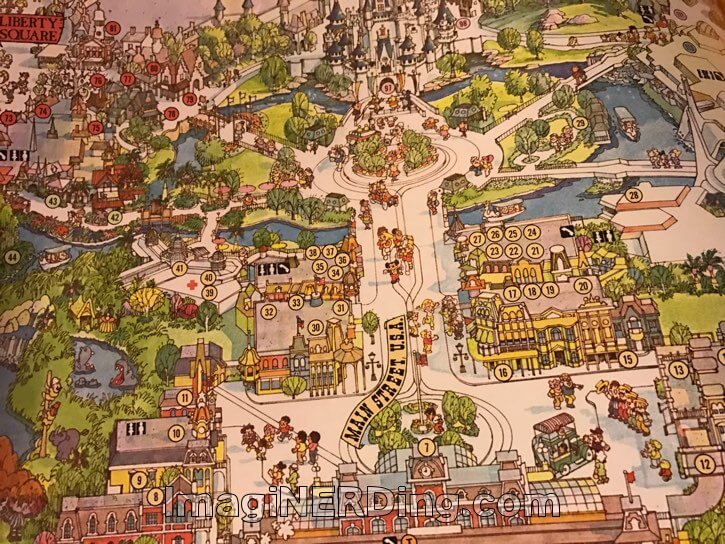 There were some also fairly large reproductions of maps that I’ve usually only seen in a very small scale. There are three maps of the original plans for the parks near the Disney Studios that I’ve always seen fairly small. In the Maps of the Disney Parks book, the maps take up more than half a page.

This is not a joke but you will want to have a magnifying glass with you in order to take advantage of the book. You will get lost in the finer details of the maps. You will spend hours going over the maps marveling at the minutia.

So yes, go out and buy this book. You might actually want to get two copies of it because this one is spectacular. As I mentioned earlier in the review, I think I would’ve created the book it differently; I would’ve spent a whole book just looking at the changes to the Magic Kingdom at Walt Disney World. In this case Disney gives a great overview of all the maps in the history of their parks and some beautiful artistry. Grab your copy of the Maps of the Disney Parks book, now!

What do you think about The Maps of the Disney Parks book?

Check out my unboxing and first look at The Maps of the Disney Parks book!

One thought on “Maps of the Disney Parks Book Review”