The Jungle Book on Blu-ray, a review!

George: The Jungle Book hit the big screens this summer and didn’t really do much. I saw positive reviews, but nothing that made me want to go see it. The Animal Kingdom even added a night show based on the Jungle Book…so is it a half-night park? But I still didn’t have a big interest in seeing the Jungle Book blu-ray. But, I’m not one to say no to a review copy, especially if we’re reviewing it for our cadets.

Jeff: I didn’t get a chance to catch it either, but there was some positive hype around it, so when it showed up, I popped it in immediately. I know George and I have slightly different takes on it, but I will start off by saying I was pleasantly surprised, but also slightly underwhelmed by it…if that makes sense. 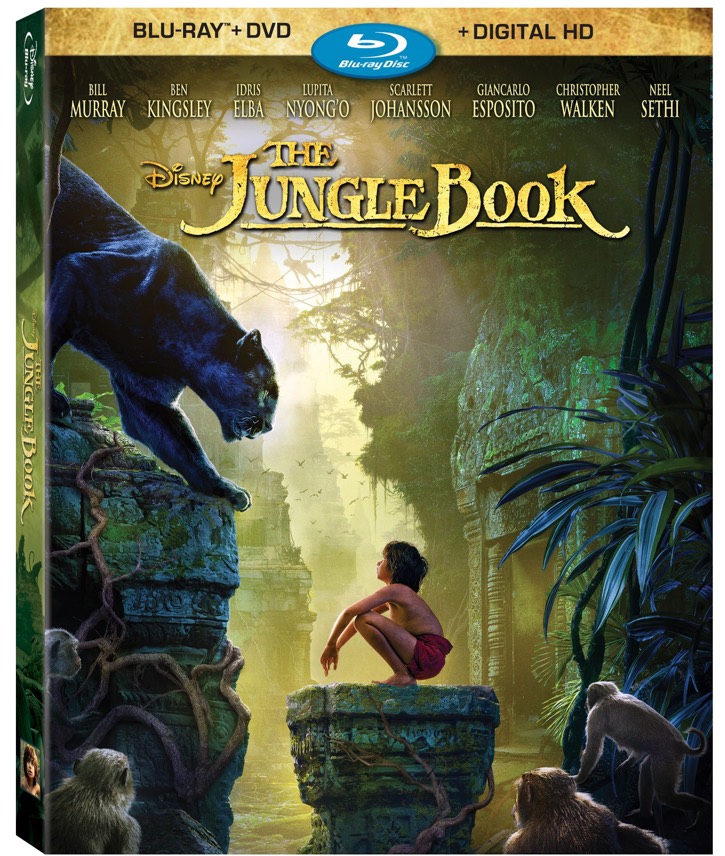 George: After watching it on blu-ray, I do have to agree with Jeff. Technologically, it was pretty spectacular, but the story was missing a lot. And we know that you can’t just have a movie because of technology (we’re looking at you, Dinosaur). There were also tons of big name stars in it, so I’m wondering why the film was so uneven.

Jeff: To be far, Jon Favreau is a big fan of the original film, and even went on record to say that the tried to adjust this film to make it closer to the source material and the classic Disney film. However, somethings got lost in translation, and it fell flat in some areas. However, others, such as whenever Baloo or King Louie were on screen, came to life

George: The visuals were stunning, but the rest of the film didn’t match up like I wanted. Most of the voice-acting was really well done and the animation was the best that I’ve ever seen. But as Jeff mentioned, the film only picked up when Baloo (Bill Murray) or King Louie (Christopher Walken) were part of the scene. And with Walken, it was hard to separate him from the character. I just wonder if the film needed more personality.

Jeff: Speaking of personality, this was not a musical, like Disney’s original animated film was. Save for two “musical” like numbers included, which in my opinion, were some of the best portions of the entire movie. However, I do want to point out the lead actor as well. I really DID enjoy his performance, especially when considering he was acting against green screens for pretty much the entire film. For such a young performer, he was quite versatile.

George: And he wore a diaper for most of 9 months!

George: Agreed, though: Neel Sethi did an incredible job. In one of the extras, you get to see how they brought the jungle to life and a lot of time, it was Neel acting against Jon Favreau or a puppet from Jim Henson Studios. I think the film is worth a viewing simply for the artistry of the computer graphics, if nothing else. It really is quite stunning.

Jeff: The extras are sparse, save for the 30 minute behind the scenes fluff piece, but like George said, its at least worth a viewing for how fantastic it looks.

George: Even though it was in the jungle, it didn’t smell that bad! Or have lots of bad jokes. So, maybe just a rental?

What did you think about The Jungle Book on blu-ray?

One thought on “The Jungle Book on Blu-ray, a review”