Midlife Mouse, a work of fiction set at Walt Disney World gets reviewed by Jeff and George! Let us know your thoughts, especially if you’ve also read this novel.

George: Midlife Mouse by Wayne Franklin is a fiction release centered on Walt Disney World and the mythology of Walt Disney. I’m always cautious about new fiction since the track record for novels set at Walt Disney World doesn’t rank very high. That’s not to say that Midlife Mouse doesn’t have it’s high points, but any work of fiction about Disney that lands on my desk raises an eyebrow.

Jeff: Like George said, fiction set at Walt Disney World is a slippery slope. As popular as Kingdom Keepers is, some Disney fans have a problem with how Pearson sets the parks up. Thankfully Midlife Mouse doesn’t have that problem. Franklin does an amazing job of making you feel like you’re in the Parks when you read the book. 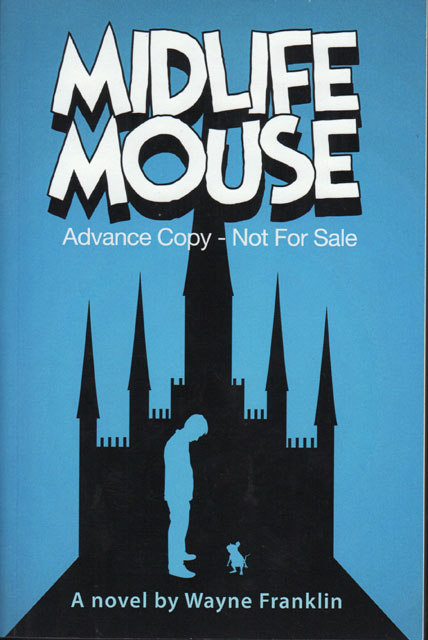 George: We meet Bill Durmer, who’s the lost patriarch of a long-standing Southern family. He finds himself at a crossroads and isn’t sure which way he wants to go. A trip to Walt Disney World with his wife, two daughters and his sister’s family thrusts Bill into a world that he doesn’t quite understand at first.

Jeff: From there, it’s quite a ride. Bill is thrown into the center of a prophecy, torn between many different factions, with the fate of Disney resting in his hands. For those of you who like a bit of fantasy thrown into Walt Disney World (and frankly, if you’re visiting the Parks, chances are, you do), you’ll enjoy the intricate web that Franklin weaves in the story.

George: A lot of people might be worried that Midlife Mouse is going to be like the Kingdom Keeper series and take vast leaps with the geography of Walt Disney World (like having the characters travel from one location to another in a way that’s not really possible) or the history of the company. Disney nerds should take heed that Wayne Franklin knows his Disney history. Although Bill pleads to not know a lot of Disney trivia or history, he quickly becomes one of the foremost experts on Disney. I was impressed with the attention to detail that Wayne writes about and could find no fault with his iteration of Disney history. Wayne is a Disney geek of the highest order.

Jeff: That being said, I did have a few issues with the book. Again, I enjoyed it for the most part, but there were some things that sprung up throughout the book that didn’t sit right with me. As mentioned, Bill, the lead character, claims not to be a Disney expert, but has a vast knowledge of the company’s history after reading a few books, when it suits the story. That, and some of the far-reaching fantasy elements just seemed slightly out of place to me.

George: Midlife Mouse is an interesting read. Wayne is a really good author with a fantastic command of the language. There are some cliff-hanger elements, which make it an enjoyable pool read. For me, I had a hard time getting into the mythology that Wayne presents. It well done, but simply not my cup of tea. I like my fiction based more in reality when it comes to Disney and the flights of fancy kept jarring me out of the book.

Jeff: I agree with George. That’s not to say there isn’t an audience for this type of book, because there clearly is. A large one, at that! I feel like a lot of Disney fans will enjoy the book; we’re just not it’s target audience. Definitely a good summer-time read for older Disney fans. Maybe it’s just me, but I felt like this was for a little more mature audience than Kingdom Keepers. If you have a teen that is moving on from that series, this may be the choice for them.

Have you read Midlife Mouse?