Star Wars Lords of the Sith by Paul S. Kemp

George: We’ve looked at two other Star Wars novels over that past few months that have really blown us away. Tarkin really impressed both of us on the strength of the story and the characters while Heir to the Jedi surprised both of us with the intimate first-person narrative of Luke Skywalker. Both books got us really excited for the new film and the number of books coming out over the next few months. So, does Star Wars Lords of the Sith by Paul S. Kemp stand up to the other books?

Jeff: Much like the other books, Lords of the Sith focuses intently on characters we know well, but on times of their life we don’t know a lot about. This book takes place during the very early days of the Rebellion, and shows us how a small splinter cell almost succeeded in taking out Darth Vader and Emperor Palpatine…and how their dynamic works.

George: A rebellion takes hold on Ryloth and we see how the importance of spice production has made Ryloth a prime target for the Empire. We meet Cham Syndulla and Isval, leaders of the Rylothian rebellion. Kemp takes us into Cham’s inner circle to see how he plans to wipe out the Emperor and Darth Vader with one attack. Still, as Jeff mentioned, this book really focuses on Emperor Palpatine and Darth Vader, especially at a time we no one really knows what Vader is capable of.

Jeff: As a small side note, it’s great how all of these new things are being interconnected. There is a off-hand comment made that Cham has a daughter…and later, we learn her name is Hera. Which, of course, because we know Cham is a Twi’lek,we know now that his daughter will grow up and be one of the lead characters on the show REBELS. I mean, that’s kind of awesome. Anyway, yes, Vader’s power is not really known, and neither is the Emperor’s, for that matter. Heck, even their “partnership,” and I use that word loosely, isn’t fully known at this point, and we can see each one testing the other in various situations, seeing how far they will go.

George: There really is a lot of political intrigue and drama in the book. Most of the story is told from the point-of-views of Vader, Cham, Imperial Officer Belkor and Moff Mors. It’s a very intense storyline and Kemp does an excellent job of describing the action while keeping the different story lines succinct, when needed, and separate. Since the book takes place so closely after Revenge of the Sith, it’s eye-opening to see the relationship between Vader and Palpatine. Even after the events of Revenge of the Sith, it’s still not obvious where Vader’s allegiance lies, nor the extent of his true powers.

Jeff: The Emperor’s abilities are still a mystery to everyone, as well, and because of that, witnesses to his power (or rather, those that cannot be trusted…meaning most people) needed to be eliminated, as to not reveal his secrets. But like George said, Vader is still a mystery to many people. When he uses his power, it often catches others, mostly the Rebels, by surprise. They have no frame of reference for the dark side of the force, so seeing him in action, killing entire squadrons of people, just further fuels all the rumors swirling about him.

George: Just like Tarkin, it was an odd sensation to read about Palpatine and Vader and to be rooting for them. Well, sort of. But it was also odd to read about them in very dangerous situations and knowing that they were going to be alive to make three more movies. The real excitement was seeing how they made it out of some pretty dire situations. 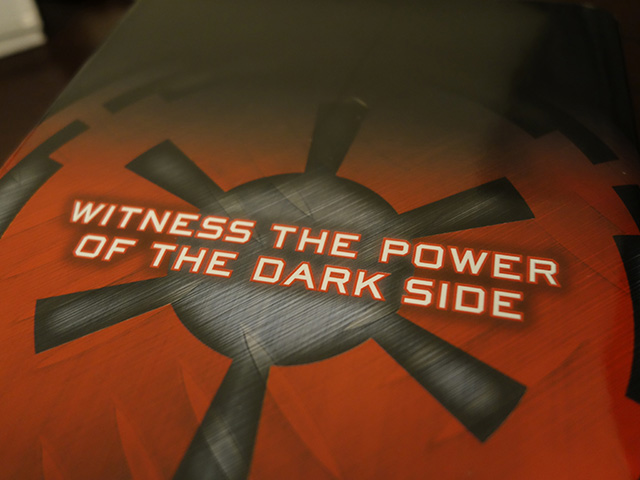 Jeff: Like there was ever any doubt, but Vader and Palpatine are cunning, formidable foes. Despite the things being thrown at them, they survive, and come up with interesting plans to get out of their situation. It’s not wonder Palpatine was able to gain control of the Senate and form the Empire. It shows, very clearly here, how manipulative and smart he is. Kemp does an excellent job of really digging deeper into the characters we know and love (loathe?) here.

George: Suffice it to say, Star Wars fans are really going to enjoy the Star Wars Lords of the Sith addition to the “now” official canon. I really enjoyed Kemp’s style and found myself looking up a few words while reading the book. Kemp’s style was very down-to-earth, but he also knows how to use words and use the appropriate words when needed. Kemp is a very impressive writer and I can’t wait to see him delve deeper into the Star Wars universe.

Jeff: While bummed that his other Star Wars novels are no longer canon, this is a great way for Kemp to blaze a trail in the new, official canon. Like George, I am excited to see what they let him dive into next. Star Wars Lords of the Sith is a great, great novel, and we highly recommend it!

What did you think about Star Wars Lords of the Sith? Are you going to check this one out?