Skip to content
Maps, for most of history, were carefully guarded since they often boasted the whereabouts of natural resources or travel routes. Let’s explore a map that helps celebrate Walt Disney World’s 20th Anniversary. 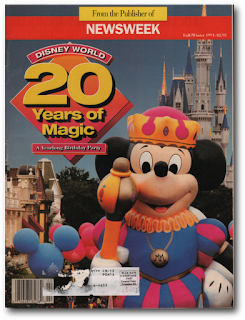 It should be pretty obvious that we are completely obsessed with Disney-related maps at Imaginerding. Maps are a great way to track changes with the resort and to see how Walt Disney World presents itself over time. A map that is from 1976 looks different from a map from 2011 and not just because there are more parks and hotels. As Disney became more sophisticated, so did its guests. Different maps were produced to highlight specific interests or to attract specific clientele.

Here are just a few of the posts that have involved maps or referenced them:

The next map we are excited to present was created to represent Walt Disney World as it existed in 1991. It has been used in various publications, but this scan is from the Fall/Winter 1991 Newsweek guide to the Disney World 20 Years of Magic, a Yearlong Birthday Party.

By far, this is a more elegant map than any that Disney had produced before. The colors are more subdued and there is a lot of green. It is hard to present detail on a map that illustrates 43 square miles and Disney chose to highlight a few park icons without making it too messy. When I look at the map, it appears as if Disney is really promoting the resorts. With Eisner at the helm, I can see how the marketing/PR departments would want to highlight one of the growth areas. Also, the special issue spends time focusing on why adults without children would travel to Walt Disney World. Anything in particular stand out to you?