Skip to content
Before the Epcot Food and Wine Festival, there was a much smaller event being held at the Village that originated the current, month-long celebration.
The Village Wine Festival started in 1979 and was an annual event by 1982. At some point in its history, the festival moved from the Village Spirits and Vintage Cellar to the Conference Center, as noted in the following article from 1987. 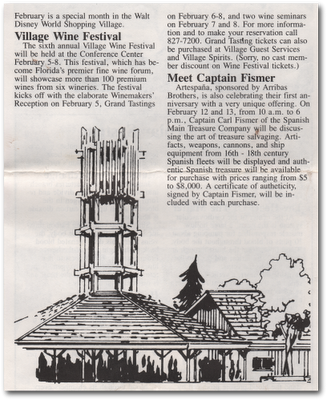 Village Wine FestivalThe sixth annual Village Wine Festival will be held at the Conference Center February 5-8. This festival, which has become Florida’s premier fine wine forum, will showcase more than 100 premium wines from six wineries. The festival kicks off with the elaborate Winemakers’ Reception on February 5, Grand Tastings on February 6-8, and two wine seminars on February 7 and 8. For more information and to make your reservation call 827-7200. Grand tasting tickets can also be purchased at Village Guest Services and Village Spirits/ (Sorry, no castmember discount on Wine Festival tickets.)

Foxxfur at Passport 2 Dreams has posted many fantastic articles about the Village. See the Village Tonight, Part Two mentions the beginnings of two Epcot traditions.

And Now For Something Completely Different!
The second part of the article on the Village details a two-day program on how to salvage treasure!

Artespana, sponsored by Arriba Brothers, is also celebrating their first anniversary with a very unique offering. On February 12 and 13, from 10 a.m. to 6 p.m., Captain Carl Fismer of the Spanish Main Treasure Company, will be discussing the art of treasure salvaging. Artifacts, weapons, cannons, and ship equipment from 16th – 18th century Spanish fleets will be displayed and authentic Spanish treasure will be available for purchase with prices ranging from $5 to $8,000. A certificate of authenticity, signed by Captain Fismer, will be included with each purchase.


A very special thanks to Celeste Cronrath for designing the series of logos for our posts. Make sure to follow her on Twitter.