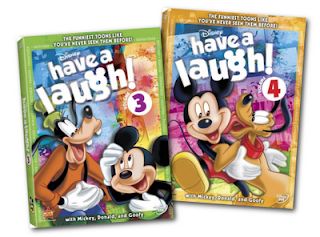 Volume 3 Synopsis: Set sail for the high seas of hilarity when Mickey, Goofy and Donald go a-whaling and wind up going overboard – literally! Bark with laughter as Pluto is dogged by a pesky gopher who’s making mincemeat of Minnie’s garden. Then, have a ball with Goofy as he hits the links and – BLAM! – his “relaxing” game of golf goes outrageously awry.

Fully restored and remastered, these amazing cartoons also feature a new “Re-MICKS” – a mash-up music video of crazy cartoon clips remixed to the hit song, “I Gotta Feeling” from the Black Eyed Peas. It’s a novel approach to uproarious classic comedy that’ll make you laugh out loud. Bursting at the seams with surprises, Have a Laugh – Volume 3 will tickle your funny bone till it hurts!

Volume 3 contains the original version of each short:

There is also an edited version of each short with new dialog and music. Which is weird. Why change the original? And speaking of changing the original, Disney presents three BLAM! versions of cartoons, as well:

My seven year-old refused to watch the BLAM! shorts. He thought it was stupid that they had re-edited them and changed them. This comes form a child who has watched all of the Disney Treasures of Donald, Pluto and Mickey over and over. His sentiment made my Disney Geek-heart proud!

Volume 4 Synopsis: Have an outrageously g’day with Mickey and Pluto when their adventure Down Under goes way over the top, thanks to a wayward boomerang and a humongous ostrich. Kick up your heels with Donald as his fireside hula dance “heats up” hilariously. Then, ride a tide of laughs with Goofy as he tries to catch a wave and – BLAM! – gets clobbered by his surfboard.

Fully restored and re-mastered, these incredible cartoons also feature a new “Re-MICKS” – a mash-up music video of crazy cartoon clips remixed to the hit song “Play My Music” from Camp Rock. It’s a bold, new approach to classic comedy that’ll make your spirits soar. Overflowing with fun and surprises, Have a Laugh – Volume 4 will paste a permanent smile on your face!

Here is the list of original shorts for volume 4:

And here are the BLAM! shorts:

If you look at the value of these discs, there are only ten shorts on both discs. That can be very expensive  at $1.50 per cartoon. Of course, you have to realize that the BLAM! and the remixed versions of the cartoons are an anathema. But if your kids really enjoyed the remixes or BLAM! shorts when they were shown on the Disney Channel, then this set is a good value, but it pains me to say it. Do yourself a favor and scour eBay and Amazon for the Disney Treasures featuring the animated shorts. There are quite a few of them and you will enjoy them so much more.