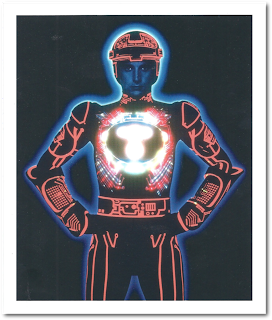 Decidedly, the 1982 Tron: The Original Classic was groundbreaking in its original release. Viewing it almost 30 years later and paired with the eye-popping Tron: Legacy

, it is still a stand-out film on so many different levels. Surprisingly, Disney has done a very limited release of Tron, previously, and didn’t choose to release the film prior to last years Tron: Legacy theatrical release. We had purchased the DVD during the latter half of the previous decade when Disney released it on disc to celebrate its 20 year anniversary. We actually found the last copy at the store. I can only imagine that the response to Tron: Legacy would have been greater if more people had been able to see the original Tron.

With the excitement of Tron: Legacy fresh, we popped our review copy Tron: The Original Classic into the Blu-ray player and the boys were fairly excited to see this older film. The film has held up very well and seemed to progress more quickly than I remembered. It looked great in the high-definition Blu-ray format and only a few key scenes made me think of Jean “Moebuis” Giraud’s more airbrush artwork from the 1970s.

The real reason to purchase this Blu-ray is for the extras, even though they are the ones from the 20th Anniversary Release.  The standout is the 2002 documentary The Making of Tron by the Kurtti-Pellerin Production Company. Recognize that name? Yeah, the Kurtti is the Jeff Kurtti, one of the most prolific Disney-related authors and a consultant to the Walt Disney Family Museum.

Here is a breakdown of the extras:

If you are going to pick up the film, I suggest buying the massive combo pack that includes both films and all of the extras (including the digital download and 3D version of Tron: Legacy).