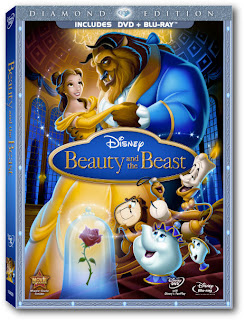 Beauty and the Beast revolutionized how the world viewed animated films. Disney was on the cusp of its second Golden Age and had experienced success with The Little Mermaid

, The Rescuers Down Under

and Who Framed Roger Rabbit

. Beauty garnered such critical acclaim in its initial release that its creators were unequipped to handle it. Disney had shown the world that they still knew how to create magic!

I won’t talk about the film in this review (anyone reading this blog should have already seen it umpteen times), except to say that the Blu-ray presentation is magnificent. There is finally a medium, outside of the theater, that does the film justice.

This Blu-ray disc, alone, is worth getting a Blu-ray player and hi-def television. Sounds extravagant, yes, but nothing quite shines like animation on Blu-ray. 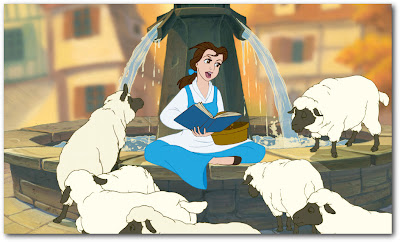 Since I started collecting movies, I have followed the format wars and changes. We purchased a lot of VHS when the market opened up in the late 1980s. I bought all of the Disney movies on videocassette and anything else I wanted to watch from the comfort of my couch.

I dutifully re-purchased everything Disney released since the clarity and sound were vastly improved. There are not many films that I have purchased more than once; most Disney films I have bought twice. Beauty and the Beast is one of those rare films that I have owned on videotape, laserdisc and dvd. And now, I own it on Blu-ray. Each format change presented a major leap in technology for the visuals, so I was inclined to purchase it. Blu-ray adds so many layers to Beauty and the Beast, that I do not hesitate to recommend purchasing it again.

Blu-ray was made for animation; the colors are magnificent and the sound is outstanding. I noticed musical motifs and sounds in the film that I had never heard before.

One of the best things I can say about the film is that my entire family enjoyed it. My six year-old son has asked to watch it again. My eleven year-old laughed in all the right places (and maybe saw himself during his upcoming teenage years). My wife sang along and reminisced. I loved every minute of it and was equally thrilled that my family loved it, as well. I remembered the first time I saw it in the theater…

The bonus features are outstanding! I was shocked when I ran across four Laugh-O-Gram Cartoons in the massive documentary. Beyond Beauty, on the second Blu-ray disc, is one of the best documentaries that I have seen concerning the creation of an animated film. It is easily over two hours of material and has interviews with Disney Historians (a few that are featured in the Geek-End Updates) and animators.

Bonus Features include the following and more:
Three Versions of the Film

One thought on “Beauty and the Beast Blu-ray DVD Review”