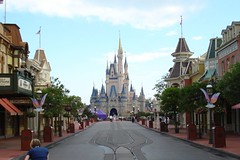 For many of us, having Main Street to yourself seems impossible. Here is a little tip that will allow you to bask in your Disney Geek-ness.

Book an early breakfast at The Crystal Palace or Cinderella’s Royal Table (CRT) and you will be allowed to enter the park and stroll at your leisure to your breakfast destination. The closer to opening you book your breakfast, the more the entrance will be guest ready.

The shot on the left was taken one minute prior to opening. Our breakfast was at 9:10 at CRT. When we arrived via a Walt Disney World bus at 8:50 on a busy Saturday and saw 5,000+ people outside in line, we thought we would miss our reservation. Fortunately, by showing a cast member our reservation, we were whisked through the gates, bypassing any lines and were released to smell, hear and see Main Street with no obstructions.

The busy-fun music was already playing….

The delicious smell of different foods would change every ten steps….

Every cast member was fully dressed, including smiles….

Because the street was empty, I tried to get some shots of the fam in front of the castle. A PhotoPass photographer walked up and volunteered to take some pics on our camera. He took the time to position us perfectly between the castle and the statue of Walt holding Mickey. He patiently snapped away while we tried to get our two year old to smile.

It was almost like the cast members were in on it–that we were experiencing something so few ever do. Even though you could not see or hear the throngs at the gates, you could feel them surging and building for the big entrance. It really added to the energy of the experience.

The whole morning felt reminiscent of finding the tree loaded with presents on Christmas morning before anyone else was awake, only amplified in magnitude by the Disney magic.