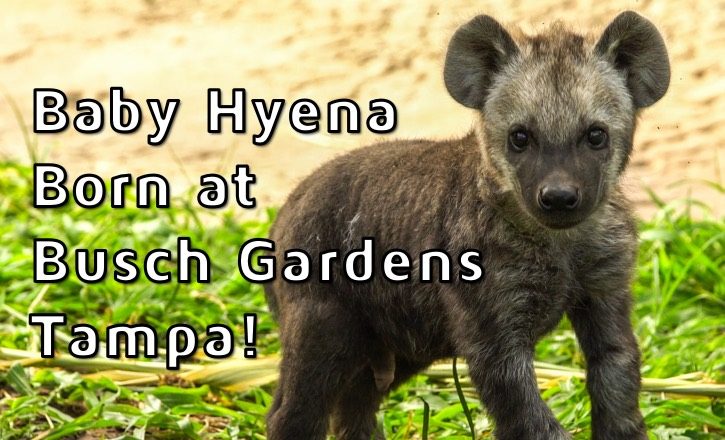 Mandazi was born at Busch Gardens Tampa Bay in April and has become a member of the clan in the Edge of Africa habitat. Check out the following release for more information and some incredibly adorable images.

TAMPA, Fla. (August 24, 2016) – Busch Gardens® Tampa Bay is excited to announce a baby spotted hyena has just been introduced to the park’s hyena  group or clan at the Edge of Africa habitat. The 20-week-old male cub was born at the park on April 3, 2016, and is named “Mandazi” for his sweet personality after a traditional pastry found on the Swahili coast. The cub is healthy and being cared for by first-time mother, 8-year-old Taziki, who was also born at Busch Gardens. The 16-year-old sire, Makali, came to Busch Gardens in 2008 from The University of California Berkley’s Hyena Project which focused on behavioral research.

While hyenas are currently not endangered, their populations and habitats are shrinking in the wild due to issues like poaching, human conflict and habitat destruction. This latest birth is part of Busch Gardens’ partnership with the Association of Zoos and Aquariums’ (AZA) Species Survival Plan® (SSP). The mission of the SSP program is to oversee the population management of select species within accredited zoos and aquariums, and to enhance conservation of this species in the wild.

Since 2008, the SeaWorld & Busch Gardens Conservation Fund has supported the research and conservation of the spotted hyena and other African carnivores. Although thought by many to be scavengers, spotted hyenas are excellent hunters. In fact, hyenas are particularly efficient predators since they are capable of digesting bones, horns and even the teeth of their prey. Typically more successful at hunting than other African predators, hyenas often have their prey items stolen by lions, rather than the other way around.

Hyenas live in matriarchal social groups where females, weighing up to 165 pounds, are typically larger than the males. They are more closely related to a mongoose and cat than a dog. Like other African carnivores, hyenas are important for the health of hoofed animal populations by weeding out the weak and sick as prey to keep the balance between the herds and their food resources.

Guests can see the baby hyena in the Edge of Africa area of the park or on the Heart of Africa tour.

What do you think about Mandazi?